Remembering Grandma with her pizza burgers 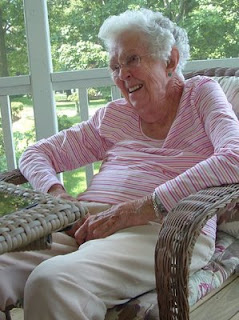 My beloved Grandma died last Sunday. She was 94, almost blind, almost deaf, and bent over from osteoporosis, but she hadn't lost her keen mind, her personality, or her quick wit.

She had told me she was "ready to go" -- several times -- so I thought I would be OK when she passed away. When I got the call, though, the feeling of grief and loss was overwhelming. To know I wouldn't hear her voice or her laughter again ... everyone who has lost a loved one knows the feelings, and yet, that doesn't make them any easier. Some people remind me that she is in a better place, but selfishly, that doesn't make me miss her any less.

Our family is scattered across the country, and one of her last wishes was for us to all get together and have a big party in the summer. She'd be there "one way or another," she said. As a result, a celebration of her life is planned for August, and I'm looking forward to it. But since I live far away from the rest of my family, last week had me feeling adrift and alone when it came to dealing with my sadness and my memories. 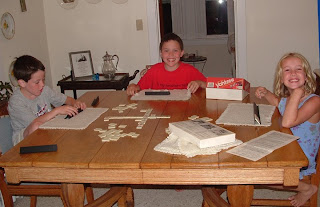 I played a game of Yahtzee with my younger son -- a game I remembered playing for hours at her dining room table in Lake Geneva, Wisconsin (shown here, with three of her 15 great grandkids).

"If Nana is watching us play this game, she sure isn't giving us very good rolls," I remarked, and then my son rolled a Yahtzee. I swear I could feel her thumbing her nose at me.

I went and saw the flowers at the Lamberton Conservatory in Highland Park, because she loved plants and flowers, both inside and outside. I remember going to Highland Park with her when she visited, and she had a keen interest in everything that grew there.

I decided to make a recipe that my cousins and I remember her making for us many times. It's pizza burgers, made with a combination of ground beef and hot dogs, a combination straight out of the 1960s. It's a retro recipe, and far from being health food, but it comes together very quickly and feeds a lot of people -- something important when you have 20 grandchildren that come to visit! In keeping with the retro dish, I served them with tater tots, which was a big treat for my guys -- I never buy tater tots.

I took one bite of the burger, was transported back to that Lake Geneva table, and the lump in my throat got so big that I didn't think I could swallow. Bad idea. Although my husband and one son enjoyed them, I've decided I'm going to keep this recipe on the back burner for now. Maybe someday I'll make it for my grandkids, and tell them about how my wonderful grandma used to make it for me when I was little.

For more recipes from special Grandmas, check out the Grandma's recipe event at The Spiced Life! 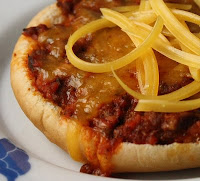 Brown ground beef and drain any fat. Add ground hot dogs, seasonings, and pizza sauce. Simmer for a few minutes. Remove from heat and add grated cheese. (You can do this ahead.)

Spread on halves of hamburger buns. Top with a little extra cheese, if desired. Bake at 400 degrees for 15 minutes or so, until hot and cheese is melted. Makes a dozen or so.
Posted by Tracy at March 28, 2009 23 comments

I'm way behind on posting, so let's wrap up Top Chef Season 5, shall we?

Just a few reactions to the reunion show:
- This year's T-shirts were boring. I "heart" Fabio? I love Fabio, but are you kidding me? No monkey ass, no creative monkeys, no "Hootie Hoo?"
- Speaking of Hootie Hoo, do you think Carla is ready to be over that? I would not be feeling the love if people went around yelling "Hootie" at me all the time.
- I still don't like Toby but he did two things on the reunion that endeared me to him. He asked about the camera work for the Hosea/Leah couch episode. As I suspected, the camera man was very sneaky -- he filmed a reflection on the window. Toby also asked Hosea about his sick dad, and it was too bad to hear he's not doing well.
- Hooray and congrats to Fabio for winning fan favorite! I'm not alone in thinking it would have been him or Carla. I hope we see more from both of them. I know we will from Fabio -- from this BravoTV blog post, it sounds like he has a lot in the works.

If you want to know what Hosea's life will be like next, let me move on to my ...

A few weeks ago, the good people from Quaker Oats contacted me and offered me an interview with Stephanie Izard, last year's winner of Top Chef. I had a nice chat with her on the phone last week, a few days before the Season 5 finale had aired. She is as personable as she appeared in last year's season. Between my rusty interviewing/note-taking skills and a bad cell phone connection, I don't want to misquote her, so I'll just share these tidbits:

- Her new restaurant: She plans to open a restaurant, called The Drunken Goat, in Chicago this fall. She chose "goat" because "Izard" is French for a type of goat. I don't think I got a good explanation for "drunken" -- see, it's those rusty interview skills. To think I have a degree in journalism...

- Spending the $100K: Since she is working with investors for the new restaurant, she is spending her winnings on exploring new media opportunities. She is doing a podcast called "The Tasty Life" on her Web site. She is also working on a cookbook.

- Riding the wave: I asked whether the attention for winning Top Chef had died down since almost a year had past. She remarked that Jeff had asked her the same question (she met Jeff at the South Beach Wine & Food Festival in February). Her answer to both of us: no, it hasn't died down -- and she intends to make the most from the opportunities that arise from it.

- The finale: With this year's finale on the horizon, I asked if she had practiced for her finale. She said she didn't practice at all, but before she went to Puerto Rico she bought a cookbook on that cuisine and read up on it. (So Ariane wasn't so off base on her cookbook comment earlier this season?) She mentioned that there had been about six months from the time she made the finale to actually going to Puerto Rico, so they had a chance to see most of the season before they went to the finale. That gap also made it a challenge for them to jump back into competition mode. This year's cheftestants didn't have as long of a gap, but they were able to watch a good part of the season before the finale.

- Top Chef recipes: I told her that I had made her banana bread that received accolades last season, and found it to be salty. I also mentioned that the original post of the recipe was full of mistakes. She explained that the cheftestants jot down the recipes while they are at the house, after the challenges are over. Someone from Bravo types them up and uploads them to the Web site. The recipes are not tested by the cheftestants. So if you decide to make a recipe from the Bravo Web site, proceed with caution.

- Visiting Rochester: This being a Rochester blog, I had to ask if she had been to Rochester. She said she grew up on the East Coast and had been to the area for some swim meets. Because it was so long ago, I didn't ask her what she recalled of the area or the food scene here ... this part of the interview was a little awkward so never mind ... moving on ...

- The Quaker Oats Viewer Quickfire Challenge: I asked if she had any tips for me if I wanted to enter the contest. "Have fun with it," she said, pointing out that oatmeal could be used for a lot more than a bowl of oatmeal. "Go for it." All of this was no help whatsoever, but I had to ask. Which leads me to... 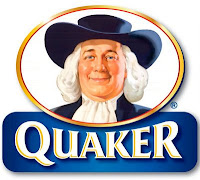 So I entered this contest and I am not a semifinalist. And you know, I'm happy about not being a semifinalist, maybe in the same way Stefan is happy to not have won Top Chef. I don't have to go around begging for votes (a practice I hate), and I would be seriously stressed out about being one of the top three vote-getters who will go and compete in a QuickFire challenge.

I'm a little surprised at the semi-finalist recipes, because I would have expected Quaker Oats to stick to healthy fare and several finalist recipes are pretty decadent. In any case, many of the recipes look delicious and worth voting for. One is banana donuts, by Emily from Sugar Plum. Two others are the creations of contesting "pals I have yet to meet:"
- Denise, with Seacoast Scallop Cobbler, and
- Deborah, with Icy Oat Mochaccino