When my kids were younger, I belonged to a Bunco group. It was an excuse for a dozen women to get together once a month to eat, drink, eat, gab, and did I say eat? And oh yeah, there was a mindless dice game thrown in for good measure. The group fizzled out after a few years, but I still have a bunch of fun memories, not to mention good recipes, from our time together.

Here's an easy recipe that I got from with Jodi, one of the better cooks of the bunch. I like taking it to cookouts because it doesn't get soggy as quickly as a tossed salad will. The honey roasted peanuts are the ingredient that elicit remarks like, "mmm .... who brought this salad?" 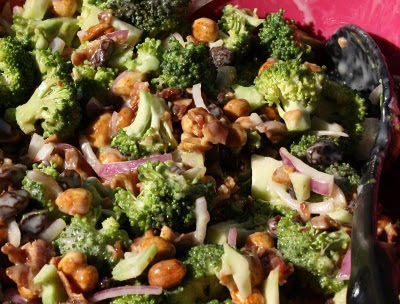 1 red onion (this can be omitted but I like it)
2 fresh broccoli heads, washed and cut into bite-size pieces
1 pound bacon, cooked and crushed (crush in a paper towel when cooled)
1 can honey roasted peanuts

Mix together the ingredients for the dressing ahead of time. Twenty minutes before serving, combine the onion, broccoli, bacon and salad dressing. Mix well. Garnish with the honey roasted peanuts just before serving.
Posted by Tracy at August 26, 2010 1 comments 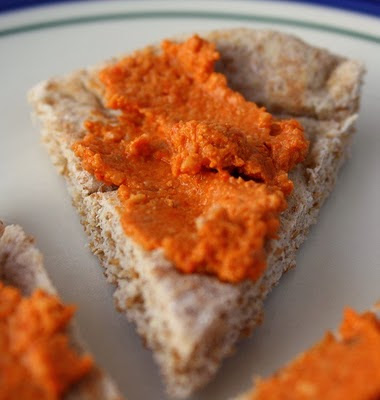 Every summer, I like to have a "go-to" dish that I can take to cookouts and picnics. Ideally it is something that's a bit different and holds well in the hot weather. This year it's been a dip called Muhamarra, which I discovered on Camilla Saulsbury's blog, Enlightened Cooking.

The original recipe called for jarred red peppers, but I prefer to roast my own. (Wegmans often has a great deal on red peppers -- a bag of six big ones for $4.99.) The easiest way in the summer is for my husband to toss them on the grill when he's grilling something, and turn them every so often until the skin is mostly charred. Then I put them in a bowl and cover them with plastic wrap. When they are cool, I peel them, get rid of the seeds, and chop.

The first time I made the dip, I found the 4 cloves of raw garlic in the original recipe to be too pungent. The second time, I blanched two cloves of garlic and it just right for my taste. The third time, I used jarred minced garlic and the garlicky flavor was nowhere to be found. Trust me, use the real stuff. 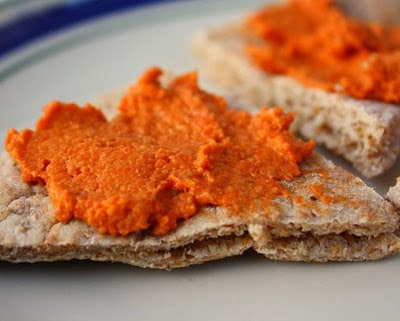 Bring small saucepan of water to a boil. Skewer the 2 cloves of garlic and lower into water. Boil about 45 seconds. Immediately put under cold water to stop the cooking. Peel and coarsely chop.

Blend all ingredients in a food processor until a coarse puree forms. Season with salt to taste. Makes about 2 cups. Keep covered in refrigerator for up to 1 week.

I served this with wedges of pita bread. For more serving suggestions, check out the original recipe on Camilla’s blog.
Posted by Tracy at August 24, 2010 3 comments