You wake up with no power and two hungry teenage boys home from school. What’s a mom to do? This mom took them out to breakfast. We love going to breakfast while we’re on vacation but it’s a rare treat while we’re at home. 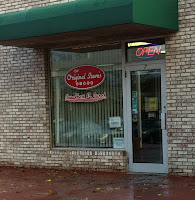 We headed to The Original Steve’s Diner, which is tucked in a strip mall on Penfield Road in Penfield. We had attempted dining there twice before, but the first time it was closed. On the second try, a line stretched out the door, and we didn’t have time to wait. This time we walked in and sat right down – our timing was lucky because a line formed shortly after we arrived. It appeared that other families had the same idea.

It’s a small place – it seats about 50 – and the décor was nondescript. But the service was prompt and friendly in spite of the rush.

I had wondered about the “original” in the name of the diner. It turns out there are a lot of original choices on the menu. Son #1 chose Reese’s Pieces pancakes from the long list of pancake creations. They were thick and bigger than his plate. (My advice: order one pancake unless you have a mammoth appetite.) The menu also featured a list of interesting plays on eggs Benedict.

Son #2 and I both ordered unoriginal omelets, both of which hit the spot. I prefer home fries with more brown crispy surfaces, but they were well prepared.

The Original Steve’s Diner was a comfortable refuge from Sandy’s aftermath. We’ll be back – even if it means waiting in line.

I’ve worked for a pumpkin farm (Wickham Farms) for 10 years, and in that time I’ve cooked a lot of pumpkin seeds. The bad news: no matter how you cook them, Jack-o-Lantern seeds will be chewy and fibrous. Pie pumpkins and – even better – Delicata squash -- have seeds that aren’t quite as chewy. But if you want to roast your jack-o-lantern seeds next week, here are tips and a recipe to make the process easy and tasty.

Tip 1: Water makes it easier to separate the seeds from the pulp. The orange goo that comes out of the pumpkin with the seeds needs to be removed before baking the seeds. The easiest way to do it: put your scooped-out pumpkin mess in a big bowl of water. The seeds will float, and you can skim them off with a slotted spoon or small sieve/ Some seeds will remain stuck to the pulp, but they come off more easily in the water.

Tip 3: Boiling/soaking the seeds: not sure. I've seen recipes that call for boiling seeds in salty water. I tried it twice and I’m not sure it makes a difference. I've also heard of soaking the seeds overnight in various solutions ranging from salty water to liquor. I haven’t tried those techniques yet but they are worth exploring.

Tip 4: Low and slow is the way to go. When I’ve tried high temperatures (like 400 degrees), the pumpkin seeds wound up tasting like burnt toast, even when they weren’t burnt. Cooking them in a 275 degree oven for a longer period of time results in better tasting seeds.

Here’s my latest working recipe for pumpkin seeds from Jack-o-Lanterns:

Cut open your pumpkins and scoop out the insides. Put the whole mess in a large bowl of water. Skim the seeds floating in the water with a small sieve or slotted spoon. Separate the rest of the seeds from the stringy orange stuff. Discard the orange stuff.

(Optional – not sure if needed:) In a saucepan, add the seeds to 4 cups of water. Add ¼ cup of salt. Bring to a boil. Let simmer for 10 minutes. Remove from heat and drain.

Spray a couple of baking sheets with cooking spray, and spread the seeds on the pans. Bake at 200 degrees for about an hour, until dry.

In a small bowl, mix together 1 tablespoon canola oil, 2 teaspoons Worcestershire and 2 teaspoons Cajun seasoning. Pour over seeds and stir to combine.

Note: this post also appears on my blog for the Flavors of Rochester website.
Posted by Tracy at October 26, 2012 0 comments I was in a predicament, one that wasn’t uncommon for me.

I had come up with a great idea, but set my plans in motion too late.

My in-laws were celebrating their 50th wedding anniversary and planned a small gathering of immediate family to celebrate it. I wanted to surprise them with a cake -- something pretty and tiered and wedding-ish.

I went into my local bakery on a Friday -- the celebration was on Saturday -- and was told that I didn't give them enough turn-around time to make such a cake.

My only hope: Wegmans. I went to the bakery at the Penfield Wegmans and started telling the girl behind the counter my situation.

"Do you need an anniversary cake?" she interrupted (the bakery was busy).

"Yes, but it's my in-law's 50th, so I wanted something nicer than a sheet cake," I stammered.

"We can do a tiered ultimate," she said. I told her that the group was just nine people, and she said that she could do a small one for $17. She could have it ready by the next day, so I went with it.

She asked me their names and marked the sheet with "Happy 50th Anniversary Rosie and John.” I couldn't imagine how all of that would look on a tiered cake, but went with that, too.

I left the store with low expectations, kicking myself for not ordering the cake sooner.

I picked up the cake the next day, and was utterly amazed at my $17 cake. It was adorned with roses and rosebuds like a miniature wedding cake. The words were not written on the cake, but on a white chocolate heart set in the top like wedding cake topper.

My in-laws were delighted with their cake, and even better, it was delicious. It was moist and not sicky sweet like most grocery store vanilla cakes. It was heavy on the icing, but that's what happens when you add on all those flowers.

Whew! I love it when a plan -- even a last-minute one -- comes together.

This post also appears on my blog for Flavors of Rochester.
Posted by Tracy at October 08, 2012 0 comments

Email ThisBlogThis!Share to TwitterShare to FacebookShare to Pinterest
Labels: Wegmans