OK, let me get this much out of the way.

I didn’t finish in the money at the Cooking Light Ultimate Reader Recipe Contest in Birmingham. But I refuse to say I lost, because it was an honor and a pleasure to be there.

I’ll give you a recap ... but I’m going to need to do it in a few entries. I’ll start with Monday, the first day in Birmingham.

When I opened the door of my room at the Embassy Suites Hotel, I knew this contest would be a treat. First, the hotel room was attractive and spacious, with two rooms – a sitting room and a bedroom – as well as a big bathroom.

I immediately spotted the gifts that were waiting for me on the table in my room – and I LOVE gifts!

The contestants gathered in the hotel lobby in the afternoon. It was great to see some familiar faces, particularly Anna and Erin, who I knew from the Pillsbury Bake-off in 2004. I also met a bunch of friendly new people from all over the country.

You would think that the atmosphere before a competition with $35,000 in prize money would be tense, but it’s really not. Most of the people I’ve met at cooking contests (this was my third) are very cordial, and many friendships are started at them.

Our first official function was a tour of the Southern Progress headquarters. Having worked in advertising, I’ve seen a fair number of headquarters and office buildings, and this was the nicest I’ve seen. If you’re interested, take a tour.

The next task was checking our trays in the test kitchen to make sure we were given all the ingredients and equipment we requested prior to the competition. My tray was in order; the only thing I needed to do was decide on a serving platter. I chose a square white one.

I envisioned the test kitchens to be industrial looking and loaded with stainless steel. I was surprised to see that they looked just like someone’s home kitchen – clean, but lived in. They were in an “H” formation, with four kitchen areas bisected by an aisle. 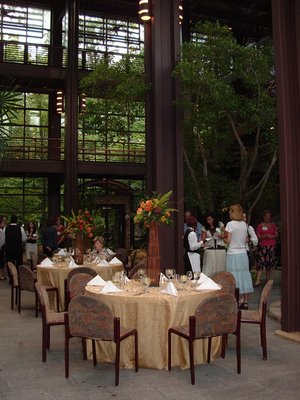 Once that was done, we had a reception and a lovely dinner that was catered in the headquarters. That's what's pictured to the right -- it's not a restaurant! We met several editors and test kitchen staff, all of whom were very cordial. Ellen Carroll, who ran the contest, was the epitome of southern hospitality, and not just because of her southern accent. She was gracious, funny, and full of life.

It was an early evening because some of us (including me) would be back at the headquarters at 7 a.m. More on that tomorrow...
Posted by Tracy at August 31, 2006