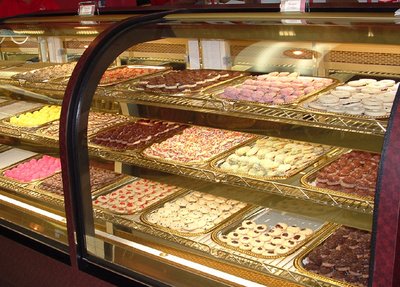 My friend and I go out for coffee almost every Wednesday morning during the school year. It’s for an hour or less, just to catch up. Our usual spot is Dunkin Donuts because it’s close and quick, but we’re both pretty tired of it.

I saw an article on Etna Italian Pastry Shop in nearby East Rochester. It quoted a woman who went there for breakfast, so I persuaded Diane to give it a try.

The shop was gleaming, spotless, and attractively decorated. It has two large cases of Italian cookies, cakes and pastries. A third case holds gelatos that look creamy and delicious.

For breakfast, though, it was slim pickings. They had a few choices of coffees from Finger Lakes Coffee Roasters in thermal pots, including my favorite, Jamaican Me Crazy. There were a few bagels and muffins, none of which were baked there. In fact, the muffins look suspiciously like Wegmans muffins (which are one of the very few baked goods from Wegmans that I’m not thrilled with). I don’t get it. They can bake all those beautiful pastries, cakes, and cookies, and they can’t bake up a few muffins or scones?

The case of the Italian cookies brought to mind the first Italian wedding I attended here – Vince and Stephanie’s. Now, I couldn’t tell you what music they danced to or what flowers they had, but I can tell you all about the desserts!

First we had the wedding cake – a moist, delicious carrot cake. Then we were served Irish Cream in little chocolate cups. Then two enormous trays of colorful cookies were brought out. As I was reflecting that the Italians sure do know how to eat, a bunch of older ladies went up to the trays of cookies, piled the cookies in napkins, and put the napkins in their purses! I remarked on this to my friend, Marie, who explained that this is a tradition at Italian weddings around here, and followed suit. When in Rome, they say, so I took a few with chocolate frosting and put them in my purse.

I thought it was an odd tradition, but maybe they’d think the same about my family weddings. These usually include people dancing -- the women with their shoes off -- until sweat is pouring off their bodies. And heavy drinking, with beer often being the beverage of choice. On my Dad’s side of the family, my cousins have been known to do shots – one that involves setting two of your fingers on fire. (I’m not kidding.)

But back to Etna. We won’t be going back there for breakfast, but I know I’ll return for some gelato. While I’m there, maybe I’ll buy a couple of cookies and stuff them in my purse for later. They just wouldn’t taste right without the funky aroma of my purse.
Posted by Tracy at September 14, 2006

I, too, remember the WONDERFUL food at Vince and Stephanie's wedding! This entry brought back some really yummy memories!!

Etna's is famous for the fact the cannolis are hand filled per order. They are the best in town along with the fig cookies.