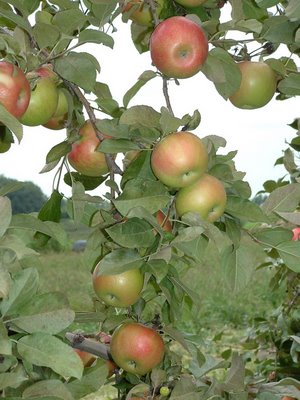 One of our family’s fall traditions is to go apple picking. New York is second only to Washington in apple growing in the U.S., and there are several places in the Rochester area to choose from.

Last year, we went in October and I was dismayed to have missed my two favorite varieties – Honeycrisp for eating and 20-Ounce for baking. As a result, I’ve been calling the Green Acres U-Pick line for a couple of weeks now to make sure I didn’t miss out again. I finally got the recording I was waiting for -- it’s Honeycrisp time!

If you haven’t had a Honeycrisp, be sure to try one if you have a chance. They are shown in the picture above. They are very crisp and have a sweet flavor with a touch of tartness. Because they are not as plentiful as some of the other varieties, they are more expensive – but they are worth it! 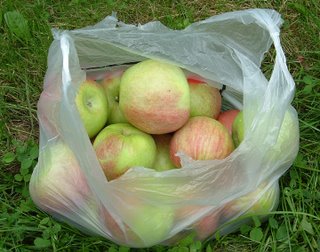 For baking, 20-ounce apples are a local favorite. They are really large (although not as large this year as I’ve seen in previous years) so you have to peel and slice fewer apples. They aren't as pretty as some of the other varieties -- they often have a bumpy surface -- but they make great pies and applesauce. That’s our bag of 20-ounce apples at right. 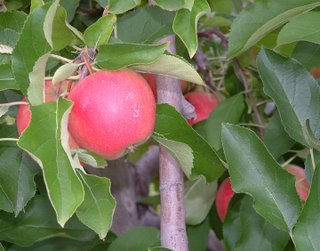 We also picked some Arlets and Galas. Both were smallish but great for eating. I think the Arlets (left) have an especially pretty color.

I’ll really enjoy eating and cooking with these apples. We’ll probably use them up in a few weeks, and go back in October to try some different varieties.