When I’m enjoying a book, I usually devour it in a couple of days. Well, it took me a couple of weeks to get through “My Life in France” by Julia Child (with Alex Prud’homme). I probably would have had an easier time reading it if I had been to France, knew about the dishes she describes (I wouldn’t know a galantine if it hit me over the head), and understood the French phrases she sprinkles without translation throughout the book.

I stuck with the book because the writing is good – it read as if Julia were telling the story – and there are many things to admire about her. She led an interesting life, having lived in Ceylon and Norway in addition to France. She had a wonderful intellectual curiosity, which is what led her to delve so much into French cooking. And it was interesting to read how her career progressed.

I personally found it gratifying that Julia was a relatively late bloomer. She started her culinary training at the age of 37. Her first book, “Mastering the Art of French Cooking,” was published when she was 49. Her TV career started a year later, at the age of 50. As a 43-year-old who is struggling to find my true calling, I found this encouraging.

After reading this book, I was inspired to try one of Julia’s recipes. I own “The Way to Cook,” one of her later works, although I haven't used it much. Since I had lots of veggies from my garden and a Porter Farms CSA bag, I decided I’d try her recipe for Ratatouille. Whenever I hear the name of the dish I think of a former coworker, John, who used to call it Rat-a-phooey. I was hoping to make a version that didn’t justify John’s name. Here’s my shorthand version of the recipe, along with how it went for me. 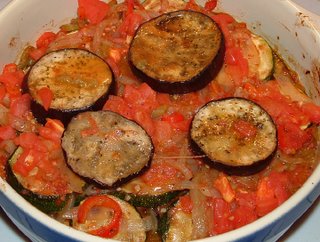 Ratatouille
Adapted from Julia Child, “The Way to Cook”
6-8 servings

Preheat oven to 400 F. Arrange the eggplant in 1 or 2 lightly oiled jelly roll pans. Paint lightly with oil and sprinkle with herbs. Cover with fil and bake 15 to 20 minutes, until just tender, but do not overcook; the slices must hold their shape.

Film the frying pan with 1 1/6 inch of olive oil. Dry the zucchini slices and brown lightly on each side; remove to paper towels. Adding a little more oil if necessary, saute the onions until tender but not browned. Stir in the peppers and garlic; fold and toss over moderately high heat for several minutes, until fairly tender. Set aside ½ cup of the tomatoes. Fold the rest into the onions and peppers; toss, adding salt and herbs to taste, until the tomatoes have rendered their juice; continue for several minutes until the juices have almost boiled off.

(All this went fine and things seemed to be shaping up nicely. I ran into trouble during the next step, which the recipe said should take about 30 minutes.)

Set aside 4 of the best-looking slices of eggplant for final decoration. Arrange the rest of the vegetables in several layers in the casserole, starting and ending with the onion mixture. Arrange the reserved tomato and eggplant decoratively over the top. Cover and bring to the simmer over moderate heat, either on top of the stove or in a 325 F oven. When bubbling gently, uncover, tip the casserole, and baste with the juices rendered; repeat several times until the juices have almost evaporated. Serve hot, warm or cold.

Well, after about 30 minutes at 325, my ratatouille was not bubbling at all, but it had a lot of liquid. The rest of the dinner was close to being ready, so I turned the heat up to 375 and uncovered the casserole. I tried basting with the juices, but it was awkward to tip my heavy Emile Henry casserole with one hand while trying to spoon the juices with the other, and I felt like its contents would come spilling out. About 15 minutes later I served it, even though the juices hadn't evaporated very much.

The flavor of the ratatouille was pretty good, but I didn’t like the super soft texture of the veggies. If it had been in smaller pieces, it might have been good as a chunky pasta sauce. My son with the adventurous palate took a bite and didn’t like it. Tom forced down a serving, but probably would agree with John’s moniker of “Rat-a-phooey.” Sorry, Julia...
Posted by Tracy at September 27, 2006

Hey, this isn't at all like Julia's recipe. The book clearly states that you need to follow the recipes as they're written, & that oven temp is not necessarily the same for every oven (& her recipe doesn't use an oven). The only thing this version has in common is the vegetables, & different proportions. "Rataphoey", indeed...Do try it again & post for us!

A hard-core accolyte of St. Julia.

You changed ingredients, you skipped steps and you used an oven. You shouldn't be surprised it didn't work. I am a really bad cook, but I have tried to follow this Julia Child's recipe in every detail and the result has been delicious.

This recipe is from "The Way To Cook." The directions said the recipe could be done in the oven. The substitutions were minor and would not dramatically change the outcome of the dish.