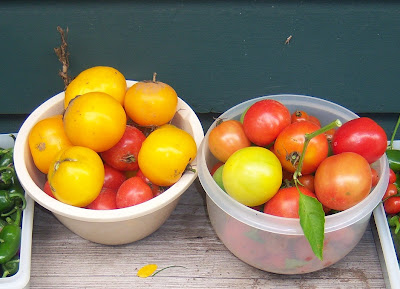 It’s Labor Day weekend, which is usually our time for doing a few things we haven’t done yet. I had been thinking of the Seneca Park Zoo and/or Seabreeze, as well as doing some grilling.

But noooo ... we’re all battling bugs, one with a crusty eye, another with a sore throat, and another with a chesty cough. The weather hasn’t cooperated either – Saturday and Sunday were gloomy and rainy, and today is a little better with the sun occasionally peeking from behind the clouds.

I had planned to make spiedies -- a local grilled specialty that I’ll write about another time. Instead, I decided to figure out what to do with the tomatoes from my garden and CSA bag. I decided on tomato sauce.

I found in my files a recipe called Classic Tomato Sauce from Donna Hay, who’s a cookbook author from Australia. I don’t have any of her cookbooks, but they look really nice.

My only problem with recipe was that it called for 12 tomatoes or 4 (14 oz) cans. I had 10 tomatoes – some really large, and a couple really small – and it would have been helpful if the recipe indicated how much the tomatoes should weigh. So I peeled, seeded, and chopped the tomatoes and weighed them. They were around three pounds. Because the four cans of tomatoes added up to a little more than that, I added one can of chopped tomatoes.

In the end, the results were pretty good. Next time, I’d leave out the red wine, because I really wanted to highlight the tomato flavor. If I decide I want a red wine flavor, I can add it in when I’m using the sauce. Here’s a paraphrase of the recipe, with my notes:

If using fresh tomatoes, peel and chop them. (I also seeded them.)

Heat the oil in a deep frying pan (I used a dutch oven) over medium to high heat. Add the garlic and onion and cook until soft, about 4 minutes.

Add the tomatoes, wine, herbs, pepper and salt and bring to a boil. Reduce heat and simmer for 20 minutes if using canned tomatoes and 35 minutes if using fresh. (Because my family likes a smooth sauce, I cooled and used a stick blender to puree.)