It’s been chicken and more chicken in our household this week. At the last minute, I decided to throw my hat in the ring for the National Chicken Contest (cooking contesters call it just “Chicken”). The deadline is Sunday. I wasn’t going to enter Chicken, because I planned to take a couple of months off from contests, but after the great time I had at Southern Living, I decided I at least wanted to take a crack at it. I’ll probably end up with two or three entries, which gives me a very slim chance of being a finalist, but at least it gives me a shot.

Since everything I'm cooking is work in progress, I thought I’d post my take on the ubiquitous Buffalo chicken wing dip in honor of the good people of Buffalo, who are digging out from a 21 inches of wet snow. For the record, there’s absolutely no snow in Rochester – I didn’t even see a flurry.

Speaking of snow, I can’t resist a quick rant. I just took two trips to the South. I have family in the South. I like many things about the South. But I do get tired of people in warm climates talking about the vast superiority of their weather. Puh-lease. Here, 21 inches of snow is rare, and when we get it, it’s an annoyance for a day or two. I’d rather be in a blizzard than in a hurricane or tornado – I have never heard of a blizzard destroying someone’s house. Plus, I love the change of seasons. Our fall foliage is at its peak right now – I can look out my window and enjoy it as I write. And I pity the child that’s never experienced sledding, making a snow angel, or walking through new snow. If you ask me, a sunny day with fresh snow on the ground is every bit as beautiful as a sunny day on the beach.

But back to the chicken wing dip. Around here, people usually make it with Frank’s chicken wing sauce, which I think is ok, but it’s a little harsh and acidic to my taste. All it takes is some Cajun seasoning to make it just right. Here’s how I make it: 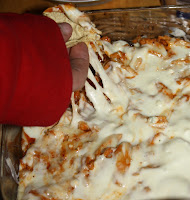 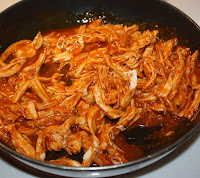 Combine, chicken, chicken wing sauce, and 2 tsp. Cajun seasoning in a skillet. Simmer over medium-low heat 10-15 minutes or until the sauce is absorbed by the chicken. Stir frequently and break up any big chicken chunks with a spoon.

In a mixer, combine the cream cheese and remaining Cajun seasoning until the mixture is smooth. Spread the mixture on the bottom of shallow dish, such as a glass pie plate. Spread the chicken mixture on top. Top with mozzarella cheese. Bake at 350 degrees for 20 minutes or until hot and cheese is melted. Remove from oven and spread the salad dressing on top. Serve with tortilla chips.

(Footnote, added later: I was not selected a finalist in that National Chicken Contest.)
Posted by Tracy at October 14, 2006

I made this the other night and it was very good! I just had some of the leftovers today heated on an English muffin and it was really good.

Glad you liked it, Alysha!

I made this for Super Bowl today, and it was a huge hit! One guy actually tried to hide the bowl so no one else could eat it. I found your site by googling for this recipe, and I'm very happy I found it! Thank you for posting it.

Jenny,
I'm so glad you liked it! I made it for my Super Bowl party as well.
Tracy