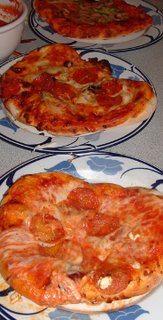 “Family Pizza Night” is a fairly regular Friday night event in our family. Each of us makes our own pizza. When I get my act together a day in advance, I make my own dough. My usual favorite is from “Cooks Illustrated” magazine. Last time, I thought I’d use a recipe from “I’m Just Here for More Food” by Alton Brown (which I’ve had for awhile but haven’t used much).

Alton Brown is a running joke between Tom and me because of an encounter we had a couple of years ago, when we were in Hollywood for the Pillsbury Bake-off contest. We were having lunch in a Johnny Rockets restaurant that had glass walls looking out to an outdoor mall area. A nice couple that we had met walked by, and we gave them a wave. When they saw us, they excitedly ran into the restaurant toward us.

“We just met Alton Brown!” they exclaimed, and showed us the picture they had taken with him on their digital camera. We squinted at the display to admire the picture of them with a scruffy looking guy.

“That’s great! Cool!” we enthused, and they scurried off to find some others to tell.

When they were out of earshot, Tom said, “who the heck is Alton Brown?”

“I have no idea,” I replied, and we both cracked up. Guess you had to be there. Anyway, this has become kind of a running joke between us. I’ve watched Alton Brown on “Good Eats” since then, and I like it. I’m not much for all the scientific stuff he presents, but the unique way he presents information makes the show both entertaining and informative.

So back to the pizza crust. When I look at the recipe in the book, a couple of things had me scratching my head. First, it called for 8 cups (1 pound) of flour, for four small pizzas. This puzzled me, because it would seem like 8 cups of flour would weigh more than a pound, and would make more than four small pizzas. It also would challenge the capacity of my stand mixer.

I couldn’t figure this out. Would I cut the tablet into quarters? I then looked at the aspirin box. No vitamin C listed anywhere. Huh.

I was puzzled enough that I decided to turn to the Internet. I suspected there’d be a review of this recipe or some sort of discussion about the aspirin somewhere. Sure enough, I found the information I was looking for on a couple of food blogs. Turns out, the recipe should have read 25 mg children’s Vitamin C (not aspirin), and it should have read 4 cups of flour, not 8. Whew! Saved by the food bloggers – what would we do without them?

I decided to go to the TV Food Network Web site to see if Alton Brown had a pizza dough recipe posted there. He did, but one that’s very different than the one in the book. For one, there was no Vitamin C in the Food Network version.

At this point, I looked up at the clock, and it’s now midnight. Is the Internet one giant black hole of time, or what? Still, I wanted to get dough in the fridge before I go to bed, so I decided to combine elements from both of Alton Brown’s recipes. I started by combining the following ingredients from the book recipe:

The book version said to mix for 2 minutes on low, rest the dough for 15 minutes, knead in the mixer for 5 minutes, knead by hand 30 seconds, let rise for an hour or so, then refrigerate. I didn’t have that kind of time, so I went with the Food TV version. Using the paddle attachment of my trusty KitchenAid mixer, I start mixing on low until the dough came together, then kneaded for 15 minutes on medium speed.

As directed, I then looked for the “baker’s windowpane.” I had a vague recollection of watching Alton Brown demonstrate this TV. The idea is to tear off a small piece of dough, flatten it into a disc, and stretch it until it’s thin. Hold it up to the light and look to see if a “taut membrane” has formed. I was pretty vague on what this “taut membrane” would look like, but the dough seemed ok to me. I repeated the whole process a second time (B. was having a friend spend the night, and 11-year-olds can consume a lot of food). I put the balls of dough into the fridge to use the next day. Whew! 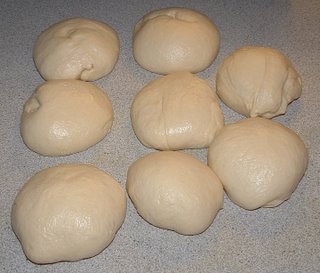 The next day the dough had risen nicely in the fridge, and we (along with B.’s overnight guest) were ready to make pizzas.

I learned my usual method for rolling out pizza dough from “Cooks Illustrated” magazine. Basically, you roll out the dough on a piece of parchment. The uncooked dough sticks to the parchment, making it easy to roll thinly. You slide it, parchment and all, onto a baking stone. (This is much easier than using a traditional pizza peel.) When the dough bakes, it is released from the parchment.

Well, I was out of parchment, so I decided to use the Alton Brown book’s method of stretching the dough and getting it into the oven. It called for a series of maneuvers that ended with tossing the dough in the air “with a twist” and catching, a la your local pizza shop. The boys loved trying this method, and a few pieces of dough ended up in the floor (and subsequently in the garbage – trust me, you don’t want to eat off my floor). 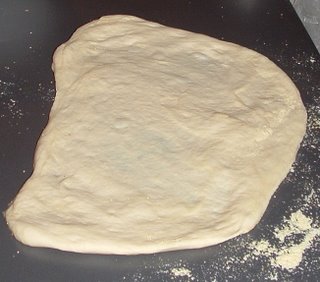 Tom quickly abandoned this method and went back to the rolling pin. I stubbornly kept on with Alton’s method and eventually wound up with amoeba-shaped pieces of dough of varying thicknesses.

We topped them as directed. Tom and the boys went with the usual cheese and pepperoni. I used various odds and end from the fridge.

Alton Brown’s recipe called for the traditional method of getting pizzas into the oven --sprinkling cornmeal on a peel, then sliding it from the peel to the baking stone. I don’t have a peel, so I used a rimless cookie sheet.

The first time I did it, there wasn’t enough cornmeal and the pizza stuck to the pan. I managed to unstick it, but not without dislodging a lot of the toppings on the pizza. For the next pizzas, I used tons of cornmeal. The problem with this is that some stayed on the stone and some fell to the bottom my oven, and all of this excess cornmeal burnt and made my kitchen smell of burning cornmeal. In addition, some of it mounded up under the crust, making the crust bumpy in places.

Removing the pizzas from the oven was also a hassle. I grabbed a bit of the crust and tried to slide it back onto the rimless baking sheet. The hot toppings oozed around as I did so. This didn’t make for attractive pizzas. The bottom line from this experience: from now on, if I’m out of parchment, it’s Boboli crusts for us.

In the end, our pizzas were ok but far from exceptional. (Those are the boys' creations pictured at the top of this post.) I haven’t decided whether or not to give Alton Brown’s pizza dough recipes another try. If you’ve made a pizza dough using one of his recipes, I’d greatly appreciate it if you’d leave me a comment and let me know how it turned out!
Posted by Tracy at December 07, 2006

Hi, Tracy! I have never used AB's pizza dough recipe, but thought I would let you know that the pancakes in that book are THE BEST EVER! I also use a Cook's Illustrated pizza dough recipe and love their crust.

Jodi,
Thanks for the tip! I'll have to try those pancakes this weekend. I have buttermilk in the fridge just waiting to be used.

Hi Tracy. I've never tried Alton's recipe, but I am looking for a good pancake recipe. Don't like any of the ones I've tried and I refuse to use baking mix. Could you e-mail me that recipe when you get a chance?

I don't yet have a copy of Alton's second book, but I love the first.

I use Billy Reisinger's Ridiculously Thorough Guide to Making Your Own Pizza:

It's simple and has yet to fail me. I haven't had the pizza stone out since getting an aluminum pizza screen. It bakes great and skips the whole sliding stuff around step.

that pizza looks so yummy...and i just got done eating a big dinner.

I use Alton's recipe for the crust, I put 1 t. of salt instead of 1 T. I don't use a mixer, mix by hand. I knead it for about 10 by hand and refigerate overnight. The recipe makes a 16 inch pizza.

I used his recipe from the show and it produced useless dough. Hopelessly sticky, and i had already added more flour during mixing because it was plainly way too sticky. Totally spoiled my day. The only thing was that i used "bread" flour not "bread machine" flour, so maybe it didn't have enough gluten.

I have made the recipe from the book half a dozen times or so, with varying (though typically positive) success.

I skip the vitamin C tablets, and I typically substitute some portion of the flour for whole wheat flour. Like you, I found that the recipe overstates the amount of flour necessary.

I've shaped it in several ways ... throw-and-twist, which is fun but risky ... but also another CI tip I saw: Turn a stainless steel bowl upside down and spread it out over the bowl so that gravity & surface tension on the bowl help against the "spring-back". This has worked the best for me.

There are several recipe differences in the book from the website, and some are quite interesting. The website recipes (I believe) are the ones presented in his show. In many cases, the book's recipes are newer ... indeed, he sometimes writes "I used to ..." and indicates what he said in some episode of his show.

The interesting difference in the bread recipe is the type of flour: the book uses AP and the show used bread. He's so adamant about that in the show, one wonders why he changed it for the book?

The MOST interesting difference is his cheesecake recipe, though. Watching the episode, then reading the book's discussion is a fascinating study into how one, very analytical cook can change his views on things.

Thanks to anonymous for the "Billy Risinger's" link. That's cool.