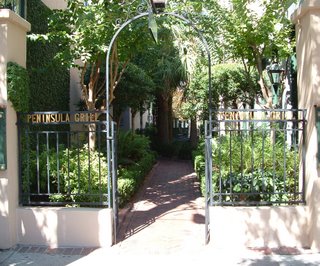 To kick off 2007, I thought it might be fun to take a page from the media and declare my "Best of 2006." I'll sort of follow the categories of my blog. I'll start with my best restaurant meal of 2006 because that's the easiest.

My most memorable restaurant meal of 2006 was at the Peninsula Grill in Charleston, South Carolina. The occasion was a dinner hosted by Southern Living editor, John Floyd, for the finalists of the Southern Living contest.

I normally wouldn’t judge a restaurant based on a meal I had at a dinner for a large group. Well, this meal was among the best I’ve had, so I can only imagine that a dinner in the dining room is spectactular.

The Peninsula Grill is located in the charming historic area of Charleston. To enter the main dining room or the room where we had our meal, you walk through a pretty courtyard that’s lit up with twinkle lights at night. The room where we ate had tall windows that looked out onto the courtyard.

We started with Crisp Romaine Salad with Lemon-Thyme Caesar Dressing. The salad also had some radicchio in it, which I’m not usually fond of. The combination of the crisp greens, creamy cheesy dressing, and crunchy garlicky croutons was outstanding. Tom, who is not ordinarily a fan of salads, practically scraped his plate clean. He pronounced it the best salad he had ever eaten.

John had thoughtfully selected three entrees – two seafood and one beef – for us to choose from. I had Grilled Jumbo Shrimp Scampi with Roast Garlic-Chive Sauce. Tom had the Grilled Filet of Angus Beef Tenderloin with Green Peppercorn Jus. Our entrees were served with Hoppin John, a rice and black-eyed pea dish that’s traditionally Southern, as well as several spears of perfectly cooked asparagus. Both of us thought our meals were delectable.

For dessert, we chose between The Ultimate Coconut Cake and Chocolate Extravaganza. John highly recommended the coconut cake, as that’s the restaurant’s signature dessert. I have started to develop a taste for coconut during the past few years, but chocolate will always trump coconut in my book, so I ordered the chocolate. When John saw that I had ordered the chocolate, he told me to take a bite of his Coconut Cake, and passed his plate to me. That was my uncertain Emily Post moment of the evening. Do I politely decline or do I take a bite? I’m not sure what Emily would do, but I took a bite. The coconut cake was fabulous. Maybe as good as the chocolate. 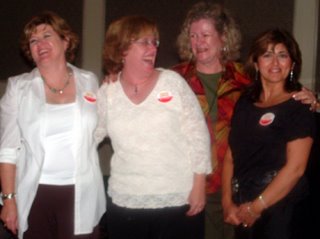 My memories of the Peninsula grill are not only of a delicious meal, but also of being surrounded by great people. John Floyd was an enjoyable and gracious host. Chef Robert Carter of the Peninsula Grill popped in and said a few words. I met Nathalie Dupree, a judge for the contest, who I used to watch on TV and whose cookbooks I own. Best of all, the other finalists I met at the Southern Living contest were great people that I remember with fondness. We had a lot of laughs. The photos that were taken came out blurry due to the dim light in the room, but this one gives a sense of the fun we had.
Posted by Tracy at January 02, 2007

Email ThisBlogThis!Share to TwitterShare to FacebookShare to Pinterest
Labels: Cooking contests, Restaurants - out of town, Travels