Last weekend B. and I decided to have one of our mother/son nights. We decided to try Golden Port Dim Sum on East Avenue, and then head to the Mona Lisa Cafe in Webster for dessert. Both places were new to us. The night ended up being what B. called, “our best night out ever.” B. has a tendency to use superlatives – as in his frequent use of, “this was my worst day ever!” – but in this case I tend to agree with him. 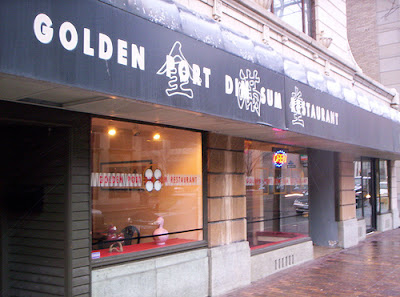 Golden Port Dim Sum is on East Avenue, in a part of Rochester called the East End. I parked in the East End garage, about a block from the restaurant, where parking was free. East Avenue had a nice city neighborhood feel to it. The street was lined with trees with white twinkle lights on them, and dressed-up people were milling about. The Rochester Philharmonic Orchestra must have been playing at the nearby Eastman Theater.

The restaurant was bustling when we got there, with nearly every table full. The waiters were moving around with urgency, perhaps to get the theatre crowd to their destinations in time. We were seated promptly and given menus, along with printed sheets for circling our choices. The dinner menu had 188 selections to choose from, including dim sums and soups, as well as Chinese, Thai, and Vietnamese dishes. Plus there was a sushi menu with 70 items. I had two reactions to this:
1. My experience is that most restaurants with huge menus don’t do any of it very well. But I decided to keep an open mind.
2. Uh-oh. What the heck are we going to order? I have never eaten dim sum and have had very little sushi. I wish someone knowledgeable were with us to give us some guidance on what to order.

I had stuck an old newspaper review in my purse for the address, so I surreptitiously took a peek at what they had ordered. Based on the article, I chose crab meat rangoons and scallion pancakes from the dim sum menu. B. wanted to try sushi, so I picked California roll, because it seemed like a good “beginner” sushi. B. also wanted egg rolls. I tried to talk him into fresh spring rolls, but he wanted the fried ones he was familiar with. We chose Pad Thai Noodles with shrimp as our entree.

I expected the food to be served to us in a sequence, like the way Chinese restaurants serve egg rolls, then soup, then the entree. Golden Port must serve it to you when it’s ready. In short order, we had a whole bunch of plates of steaming hot food on our table.

The crab meat rangoons were our favorite. They were pretty fluted half moons of crispy deep fried goodness, filled with a creamy crab mixture. We also devoured the sushi. I had B. try one with some green wasabi on it. “What are you trying to do, kill me?” he almost yelled after he tasted it. I liked the wasabi. It clears the sinuses.

The shrimp egg rolls were larger than the ones I’ve had elsewhere. I was sure that if I ate one, it would sit like lead in my gut. I reluctantly took a bite. The wrapper, which is thick and greasy at most places, was thin and crispy. Inside were lots of crunchy, fresh-tasting veggies and shrimp. I would rather eat a fresh spring roll, but if you like fried egg rolls, this is the place to get them.

The two dishes we wouldn’t order again were the scallion pancakes and the Shrimp Pad Thai. The fried pancakes were mildly flavored and heavy. The Pad Thai was ok, but I prefer the version I’ve had at Pattaya in Penfield.

At the end of the meal, B. exclaimed, “This is my new favorite Chinese place. It’s even better than Wegmans!” (Wegmans has a Chinese buffet that’s better than the fare at Chinese buffet restaurants, but pricey.) So I said, with a straight face to our waiter, “my son thinks your Chinese food is even better than Wegmans.” The waiter looked stunned at my comment and not sure of how to respond. When I broke into a grin, he laughed. “I would hope so!” he said. The tab, including beverages (tea for B., pop for me) and tip, was $32.

We’ll definitely go back to Golden Port, but I’d like to be prepared next time. If you’ve been there, or if you like dim sum or sushi in general, what are your favorite things to order?

I wanted some time to digest before we went somewhere else, so we took a drive through Rochester’s Park Avenue neighborhood. This is a trendy area with row houses and charming old houses that either are divided into apartments or rehabbed into spectacular homes. The residents consist mostly of 20-something renters or hip homeowners who refuse to live in the ‘burbs. The area also has several fun eateries and shops. As we drove, I pointed out the landmarks of my single days to B.. Then it was onto Mona Lisa Cafe in Webster.

Mona Lisa Cafe is in a strip mall on Ridge Road, right near Five Mile Line Road. The first thing you see as you walk in the door is a case of colorful, creamy looking gelatos. It is a long, narrow space, with bakery cases and counters to the left, and tables and chairs to the right. The bakery cases hold confections including Italian cookies, squares of birthday-type cake frosted on all sides, and gorgeous pastries. I asked where they got their baked goods, and they said that some came from Italy, others from New York City, and the rest from a local family bakery.

B. ordered a chocolate hazelnut gelato called Bacio (in case you haven’t surmised, they’ve got an Italian theme going). I also let him order a half-shot mocha – he’s almost a teenager, after all. I ordered a confection called the Mona Lisa Kiss. It was a thin layer of a spongy chocolate cake, topped with mounds of hazelnut mousse, covered with chocolate ganache and garnished with hazelnuts. I didn’t have my camera on me – I feel dorky taking pictures of food in restaurants and would rather enjoy the food – but in this case I wished I had it. My drink was a cup of flavored black coffee.

We enjoyed a local music duo until they ended at 11 – much past B.’s usual bedtime. All in all, it was a great evening.

Golden Port photo by Yoshisushi uploaded from Flickr
Posted by Tracy at January 10, 2007

How FUN! What a delightful adventure - quite enjoy Golden Port. Will look up the Mona Lisa Cafe :-)

The "buns" are good, especially the vegetable. And the vegetable dumplings. The Golden Port veggie roll, and the spring rolls are great. Our friends never go without getting the Chinese greens.

We used to go to Golden Port when they were in a little tiny spot in a more 'humble' spot in the City. Like, we liked to keep any eye on our car... So we are loving this new restaurant! I'm so glad they are doing well.

The availability of sushi was new to me when I was there in November. My tastebuds were set for dim sum, so I didn't order any, but I'm wanting to go back and try it there.

That's great that you had such a great time together. My kids are so far away from savoring the same foods as I do...except ice cream, of course :)

stumbled upon your blog coming from kate's. golden port has decent food. their shrimp shumai (steamed dumplings) are quite tasty. i'm a huge fan of the egg custard tarts for dessert, but they often run out of them. for pad thai, i'm a king & i kinda gal. the sushi at golden port is okay -- fine if you're in need of a sushi fix (though here, i think wegmans might be better!) plum house is my pick for sushi.

are you familiar with chowhound.com?