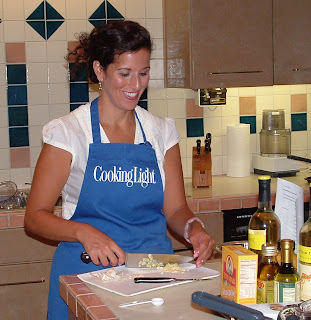 When I started enter cooking contests, I had one goal -- to win some cash.

Now that I've been doing this kooky hobby for a few years, I can honestly say that participating in contests has garnered me something even more valuable -- friends from all over the country. One of those is Erin, who I met at the 2004 Pillsbury Bake-off. I also hung out with her at last year's Cooking Light contest -- that's where I took this photo of her.

Erin's winnings have eclipsed mine. In addition to winning her category at the Cooking Light contest, she also won Rachael Ray's burger contest last year. She has also finished in the money in the National Chicken Cookoff and National Beef Cookoff. And on and on.

A few weeks ago, I got a phone call from Erin. She was in town visiting her in-laws, and she was at Wickham Farms, so I popped over to say "hi." It was fun to see her and her adorable kids.

Erin's not one to brag, so that may be why she didn't tell me about her exciting new gig. She has a blog on Rachael Ray Magazine's Web site! I couldn't be more envious, but her success is well deserved and she's doing a great job on her blog. (Hey, if I was being paid to write this thing, I might do it on a more regular basis!)