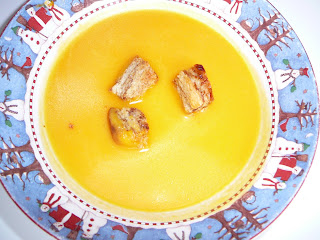 I have a short list of foods that I don't like but wish I did. The list includes winter squash -- butternut, acorn, etc. I get them in my Porter Farms CSA bag, and can get lots for free at the end of the season at Wickham Farms. They are nutritious and great at this time of year, when produce is sooo expensive and not that good. Every year I try new squash recipes, but the results rarely appeal to me.

We recently had friends (M&M) over for dinner. M (the wife) is a former farm girl from Michigan and eats most veggies, so I thought I'd experiment with some butternut squash still in the fridge from Porter Farms. The family doesn't like things that are spicy or ethnic, so I made this basic butternut squash soup from Cooks Illustrated. (The only change I made was to use less butter.) The preparation is unusual but easy. One of the suggested garnishes was cinnamon-sugar croutons, and I did my own spin on them using some cinnamon bread I had in the house. I didn't think I'd like the sweet croutons in the soup, but the combination rocked. Even M (the husband) ate a bowl -- and his wife commented that he doesn't usually like butternut squash.

I'm sending this to Sweetnicks for her ARF/5-A-Day roundup. If you (like me) are looking for healthy recipes for your new year's diet, that's a good post to check out on Tuesdays.

Silky Butternut Squash Soup with Cinnamon Croutons
Adapted from Cooks Illustrated, November/December 2001
(Note added later: After several times of trying, I've realized that you really cannot substitute another squash for butternut. It changes the consistency. Better to find a recipe developed for a particular squash.)

Heat butter in large dutch oven or a pot that comes with a removable pasta insert. (I used the latter.) Add shallots and cook, stirring frequently, until softened and translucent, about 3 minutes. Add squash scrapings and seeds and cook, stirring occasionally, until fragrant and butter turns bright yellow, about 4 minutes.

Add 6 cups of water and 1 1/2 teaspoons salt and bring to a boil over high heat. Reduce heat to medium low, place squash cut-side down into a steamer basket (or pasta insert, which is what I used), and lower the basket into the pot. Cover and steam until squash is completely tender, about 30 minutes. Remove from heat. Use tongs to transfer squash to rimmed baking sheet; reserve steaming liquid and the stuff in it. When cool enough to handle, use a large spoon to scrape the yellow flesh from the skin into a bowl; discard skin.

Pour the reserved steaming liquid through a mesh strainer into a second bowl. Discard the stuff that's in the strainer. Rinse and dry the cooking pot.

In a blender, puree the squash and reserved liquid in batches, pulsing on low until smooth. (Do not overfill the blender or it will overflow. To be on the safe side, cover it with a towel while you are blending.) Transfer the puree back to the cooking pot; stir in the cream and brown sugar. Heat over medium-low heat until hot. Add salt to taste. Serve immediately. (I made it ahead and it reheated fine.) Makes 1 1/2 quarts, serves 4-6. 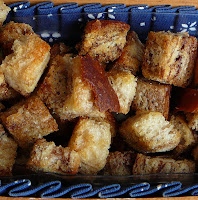 Preheat oven to 350 degrees. Put butter on a rimmed baking sheet and put in oven until the butter melts. Remove from oven. Put bread on the melted butter and toss until all are coated with butter. Bake until crunchy, about 10 minutes.
Posted by Tracy at January 16, 2008

Here's another recipe you might want to try, It's a minestrone soup with butternut squash.

I made it the other night and the family loved it.

Hey rottenchester, I had wondered where you had gone. Thanks for the recipe link. I haven't seen that blog before. It looks good.

Oh yum! The use of cinnamon sugar croutons is definitely different. I just made a tart with butternut squash last night and now I want to cook with it more.

Tried to vote for you, but they wouldn't take me because I am not from America, ho hum!
That is just the kind of soup I like!
Myself & Lisa have started up a new blog event called No Croutons Required, you might want to give it a go! The theme this month is Vegetaian Soup!
Good luck with the voting!