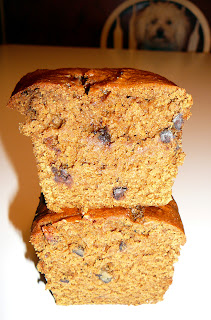 Camilla Saulsbury is a big name in the arena of cooking contests. She won two of the biggest national competitions -- National Chicken ($100,000 prize) and Build a Better Burger ($50,000) -- and has won money in scads of others. And now she has a lovely blog called Enlightened Cooking that focuses on healthy food.

I thought I'd try one of the first recipes she posted, Cinnamon-Spiced Butternut Bread. I made it as she directed but used canned pumpkin instead of butternut squash (one of her suggested variations). Instead of her two large loaves, I made four small loaves. She suggested a few variations, and I did one of my own -- using mini chocolate chips in two of them. As I expected, it was delicious -- very moist and a little less sweet than some of the other pumpkin breads I've tried. If you want the directions for baking regular-size loaves, be sure to go to Camilla's recipe.

Adapted from this recipe by Camilla Saulsbury

Preheat oven to 350°. Spray 4 mini loaf pans with Baker's Joy (or another nonstick baking spray with flour); set aside.

Bake 45-50 minutes or until a wooden pick inserted in center comes out clean. Cool loaves in pans 10 minutes on a wire rack; remove loaves from pans and cool completely on wire rack. Makes 4 mini loaves.
Posted by Tracy at January 29, 2008

Pumpkin bread does sound good. I don't think I made enough stuff with it, during the fall.
And it's light. Yay!

You've been busy!! Loved all your recent creations - yum! I'm back in Rochacha, trying not to get blown away by the gusts today! But I love the winters here , especially for all the food choices :-)

Emiline, I work at a pumpkin farm so I think I have pumpkin on the brain now. Love it.

Smita, so glad to see your comment! I was getting concerned about you. I'm concocting a recipe for a contest today and I realized I'm missing an ingredient. I so don't want to venture out into this wild wind! Oh well, off to Wegmans.

This sounds delicious! I'm always impressed by people who can make up their own recipes!

I like Charlie keeping an eye on things in the background. This sounds yummy. I have to say I would try the pumpkin before the butternut squash.
Karen

Deborah & Cakespy, I just finished one of the mini loaves today. It doesn't dry out at all in the fridge. Two are in the freezer.

Karen, you're not anonymous anymore! I actually took better photos of the bread but I couldn't resist posting the photo that Charlie snuck into. And I agree about the pumpkin but I'll probably try it with squash sometime because I get so many in my CSA bag.