A tangy taste of Jamaica 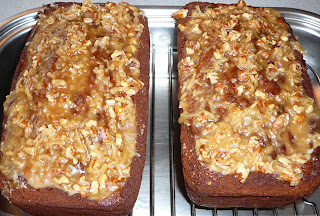 I had six black bananas on my counter, so I made a double batch of Jamaican Banana Bread and kept one for our house and took the other to band practice. I've never made this recipe before, but it has received rave reviews on the Cooking Light Web site and bulletin board.

I made it as written except for substituting King Arthur white whole wheat flour for half of the all-purpose flour. It was really good. I loved the combination of the tangy lime with the sweet banana. It was a welcome taste of the tropics in the middle of our cold snap. Of course it would be even yummier if I doubled the tangy topping but then I suppose it wouldn't be light. I might like it a bit moister, so next time I make it, I might add just a little more banana.

I frequent the Cooking Light Great Food bulletin board, and we've had debates about how we like recipes written. I don't think there's a right or wrong way, but I personally like each ingredient to appear once in the recipe. It helps me when I'm making sure I have enough of each ingredient. If it's used twice in the recipe it should indicate as much in the list of ingredients (with "divided use" as an example) so that you don't dump in the entire amount the first time you use it.

This recipe is a good example of why I like the ingredients to be listed once. Toasted pecans are called for twice in the list of ingredients. I didn't notice, so I had to toast pecans two separate times -- not a huge deal but a tad annoying. I also don't like it when a recipe says add "the next five ingredients," which Cooking Light always does.

So for my own use, and yours if you like it written my way, I've rewritten the recipe below. If you like written it their way, just go to the recipe on the Cooking Light site.

Pour batter into prepared pan; bake at 375F for 50 to 60 minutes or until toothpick inserted in center comes out clean. Let cool in pan 10 minutes; remove from pan. Let cool slightly on a wire rack.

Combine brown sugar and 2 teaspoons each butter and lime juice, and 1/8 tsp rum extract in a saucepan; bring to a simmer. Cook 1 minute; stir constantly. Remove from heat. Stir in 2 tablespoons each pecans and coconut; spoon over loaf.

I like recipes written "your way" too...particularly dislike the whole add the next 5 ingredients thing. I am SO with you!

Hi!
This banana bread recipe sounds yummy. I too prefer ingreds. to be listed as "divided" rather than separately. How frustrating to have toasted the nuts twice!

This is my first time on your blog... looks great!

Jamaican me crazy with your delicious-looking bread! Ok, that was stupid.

Maybe I should make this for my Reggae band member brother-in-law.

I saw this bread and have been wanting to make it! I had to laugh about the way recipes are written - I totally agree with you!!