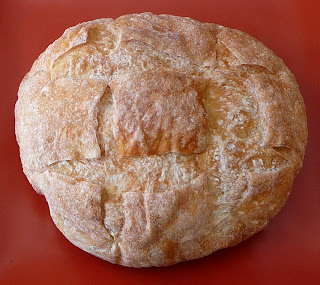 After completing the Daring Bakers challenge to make Julia Child's French Bread, I wasn't 100% pleased with my results, or with Julia Child's recipe. Several Daring Bakers had supplemented their knowledge by watching videos online, but I didn't. I thought a recipe should be able to stand on its own. I decided to try out a different but similar recipe to see how I fared.

I chose the French bread recipe from The Book of Bread by Judith and Evan Jones. Judith Jones is the editor who championed and edited Julia Child's first book, Mastering the Art of French Cooking. (This was after she discovered the diary of a girl named Anne Frank in a rejection pile and helped bring it to publication.) Judith's book, The Tenth Muse: My Life in Food, is on my list of books I've been meaning to read.

Since this wasn't a Daring Bakers post, I decided to allow myself a few small changes from the book. And since I just wrote about French Bread, I'm just going to point out how the Jones' recipe (and my modifications) differs from Julia Child's. 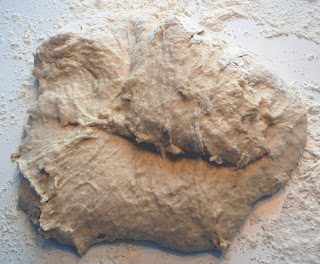 - The writing - The Jones' writing style is friendly, reassuring and less fussy, which I liked better than Julia's.

- The ingredients -- The Jones' add a bit of whole wheat for texture and flavor. I can't say I noticed much of a difference.

- The mixing/kneading -- The Jones' add the step of scraping the dough up and slapping it down hard against the counter several times. This freaked out the dog but it completely changed the texture of the dough, and made it soft and smooth. 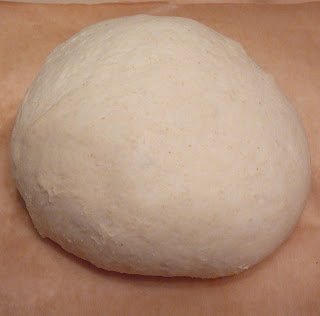 - Shaping the loaf -- The Jones' directions were simple: Using the palms of your hands, lightly floured, coax the sides of the dough down and under all the way around, at the same time plumping up the loaf. You will feel an invisible elastic cloak of gluten; just stretch it, don't break it. That's pretty much what I did for Julia's recipe, by the way.

- Transferring the loaf to a pan - Unlike Julia, the Jones' don't have you flip the loaf over after it has risen, which I think is a particularly tricky endeavor. Instead, the loaves rise on a paddle lined with cornmeal, and are transferred to the baking stone in the oven. I'm not a big fan of the whole cornmeal business. It makes a mess and burns on the bottom of the oven, and you need to use an awful lot to keep the loaf from sticking. I let my loaves rise on pieces of parchment and transferred them to the baking stone. I knew from my experience with pizza that they would stick to the parchment before baking, but release when they were done baking.

I did make one BIG mistake in my process. During the final rising, I got absorbed in American Idol and forgot all about them! I do think they may have over proofed. 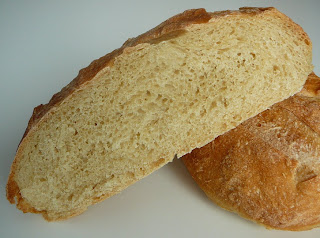 Despite my mistake, we preferred these loaves to Julia Child's. The crust wasn't quite as hard, and the flavor wasn't quite as salty. The only disadvantage to this recipe is that the measures are not by weight, which serious bakers prefer to measuring by volume.

In the end, I am glad I tried making French Bread and I did learn from the experience. But I am over it. I don't really think it's worth the effort required. From here on out, I'll be buying my French Bread at Wegmans.

On the other hand, it did remind me that I enjoy making bread at home, and it's not as much of a bother as it seems. I plan to try my hand at some of the easier no-knead recipes that seem to be in vogue now.

But if you want to try your hand at French Bread, I do recommend this recipe (my comments in parentheses):

Good French bread depends on slow rising to develop its honest flavor and chewy texture, and those skinny loaves need a hot oven and a great whoosh of steam to acquire the deep, golden, crunchy crust. So take your time once you start; the dough can always be left to rise in the refrigerator, or overnight on a cool windowsill, if that works best for you.

Some years ago Paul and Julia Child spent months perfecting a method to create in American home ovens the true characteristics of crusty French loaves, and the recipe we give here is based on their invaluable findings, along with some touches we've worked out in our own kitchen as we've baked this bread almost weekly over the years. The use of just a little roughly ground wheat flour, while perhaps not authentic in this classic white flour loaf, adds a little texture that we like.

Put the yeast in a large bowl with 1 cup of the warm water. When dissolved stir in the remaining water, salt, whole wheat flour, and about 5 1/2 cups of the white flour -- enough to make a dough that holds together. Turn out on a floured work surface and let rest while you clean the bowl.

Scrape the dough up -- it will be quite soft and very sticky -- and slap it down hard against the counter. Repeat several times. Start kneading, adding more flour as necessary. Knead for about 10 minutes (I did this in the stand mixer) until the dough is smooth, no longer sticky, and full of bounce. Return the dough to the clean, ungreased bowl, cover with plastic wrap, and let stand at no more than 68 degrees for at least 3 hours, until triple in volume (this only took a couple of hours). We've found that it is even better to leave the dough overnight on a cold windowsill, or if the weather is warm to let it rise for about 1 hour at room temperature, then refrigerate overnight; weigh down with a heavy plate.

After the first rising, turn the dough out, punch it thoroughly all over, return it to the bowl, cover again with plastic wrap (spray bottom with cooking spray), and let rise at room temperature until double in volume -- probably 1 1/2 to 2 1/2 hours depending on how cold the dough was. (Again, this went faster for me).

Divide the dough in half and form two round loaves. First pat each half into a round cake about 7 inches in diameter. Then, using the palms of your hands, lightly floured, coax the sides of the dough down and under all the way around, at the same time plumping up the loaf. You will feel an invisible elastic cloak of gluten; just stretch it, don't break it. Pick up the round and pinch together the seams on the bottom. Place, seam side down, either on a cornmeal-sprinkled paddle, if you are going to bake the loaves directly on hot tiles or a baking stone, or on a greased baking sheet sprinkled with corn meal. (You may also omit the cornmeal and place them on separate sheets of parchment on the paddle.) Let rise, covered lightly with a kitchen towel, until double in size - about 45 minutes.

Half an hour before baking, set in motion your device for creating steam. (I put a shallow pan on the bottom shelf of my oven as I was turning it on to preheat, then put water in it when I put the bread in the oven.) Preheat the oven to 450. Just before putting the loaves in, slash them with either three long, curved slashes or slashes going both ways in a tic-tac-toe pattern. Brush with water. Slip the loaves onto your hot surface, pulling away the paddle with a firm jerk, or place the baking sheets in the oven.

Bake 15 minutes ate 450 degrees, then lower the heat to 375 and continue baking another 20 minutes or until the loaves are nicely browned, crusty, and hollow-sounding when tapped on the bottom. Cool on racks.
Posted by Tracy at March 02, 2008

Thanks for posting an alternative recipe. I've been baking artisan breads for awhile now, and, for the life of me, I couldn't figure out the purpose of the "floured-towel/upside down loaves/flippy" disaster. Plastic wrap keeps the skin from forming, and having the loaves rise on parchment, then sliding them in to the hot oven works equally well. I did the challenge verbatim in Round One, but not in the succeeding rounds, and, honestly, there is no difference. Well, maybe some -- fewer tears. ;)

Thx for the recipe & comparison to our DB one! I'll try yours asap. I got hooked on having fresh, homemade bread in the house. I'm halfway through The Tenth Muse & it's a great read!

Ahh yes.. definitely quicker and that's the way I shaped my boules as well.

Mary gave me another French bread recipe that's ready in 4-5 hours that I had intended on making last week, but ended up running out of time.. I'm going to make it today and I'll post my results.

This is so informative - thank you for sharing! The 'Little Bakery' is currently object of my stalker-like devotion. Good to know that the French bread at Wegmans is pretty good. Happy Easter!

I like to cook very at home. Greetings from Poland. :|