What to make for a special Valentine's Day for my three guys? A dilemma, since they have different ideas of what a "special" meal is. The final decision: an easy surf & turf, accompanied by baked potatoes and salad. 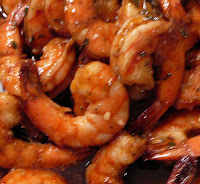 The surf was Spicy Baked Shrimp from Epicurious.com, made as directed. I purchased Wegmans' farm-raised shrimp from Belize ($7.99 a pound). The shrimp is said to meet environmental and health standards. I am glad that Wegmans is paying attention to environmental issues, but I'm sorry to say that I didn't care for the flavor of the shrimp. I don't think it was the recipe, which had a nice spice to it. The shrimp had a strong flavor that I personally didn't care for. If anyone has purchased these shrimp from Wegmans, I'd be curious to know what you think of them. 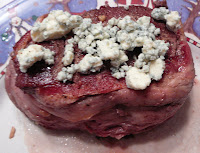 My Filet Mignon preparation was based on this Tyler Florence recipe from the Food Network. Tyler's recipe called for a Pinot Noir Sauce, which I didn't make (my sinuses can't tolerate red wine.) Instead, I garnished it with blue cheese, which my husband loves on steak. It was pretty good. I would have liked the bacon to be less flabby, but Tom says that's how it is when it's wrapped around filet. And I would have liked the mushrooms to be sauteed more, but I used plain old moonlight mushrooms instead of the wild mushrooms I should have used.

Here's how I made it:

Season both sides of the filet mignon generously with salt and pepper. Wrap a piece of bacon around the sides of each steak and secure with butcher's twine. In a large heavy, ovenproof skillet, heat the olive oil over medium-high heat until almost smoking. Place the steaks in the hot pan and cook until well seared on 1 side, about 3 minutes. Turn the steaks over (there should be a nice crust on top). Add the mushrooms and garlic; give everything a good stir. Transfer the pan to the oven. Roast for 10 to 12 minutes or until the steaks are cooked medium-rare. Garnish with blue cheese.
Posted by Tracy at February 17, 2008

Except for flabby bacon.

We love filet with blue cheese without the flabby bacon :)

Sounds like it was a nice dinner (we had leftovers on V-Day!)

Well, they both look phenomenal! And now I have a serious craving for surf & turf...