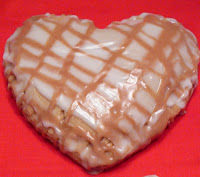 Happy Valentine's Day! Here's what my guys will have for their special breakfast: Pop T'hearts! I was inspired to make these by a post on the blog of a 17-year-old cook. I figured if a 17-year-old could make them, so could I!

When I saw that her recipe was baked at 450 degrees, I was concerned I'd burn them. I also wasn't sure how many it would make, considering she was starting with just 1 1/2 cups of flour. Then I recalled that Alton Brown had made them on "Good Eats," so I turned to his cookbook, I'm Just Here for More Food. 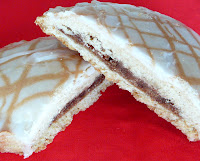 I've ranted about recipe formats before, but this book takes the cake when it comes to making me nutso. I don't mind the premise, that he's trying to teach different methods of baking, but the execution doesn't work for me. The general baking instructions are on a flap at the beginning of each chapter. The idea is to fold those instructions over the page of the recipe you are following, but the ingredients of the recipes aren't listed in the same order as the instructions, so it's an effort to go back and forth.

Anyway, my biggest change from his recipe was to use some white whole wheat flour. I also rolled the dough (probably not thinly enough) and cut it with cookie cutters, instead of following his technique to use wax paper to fold the dough into rectangles.

So I'm going to post the recipe in such a way that you can actually follow it. Am I saying I'm a better recipe writer than Alton Brown? Well, yes I am. 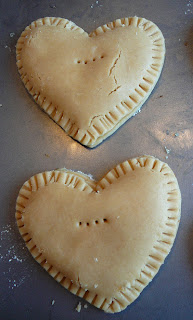 Fillings and glaze, as desired (see end of recipe for ones I tried)

Using a stand mixer with the paddle attachment, beat the shortening on medium speed for one minute. Add the sugar and beat until mixture lightens in texture and increases slightly in volume. Reduce the speed to "stir" and slowly add the eggs, stopping to scrape down the sides of the bowl as necessary.

Add the flour mixture in three installments, alternating with two doses of the milk.

Divide the mixture into two disks and refrigerate for one hour. Beat an egg with a little water to make an egg wash. Preheat oven to 350 degrees.

One disk at a time, roll dough between sheets of waxed paper and cut out with cookie cutters.

Place the filling on one piece, leaving a 1/2-inch border on the outside. Brush egg wash on the edges. Place another piece on top. Press down around the outside edge with the tines of a fork to seal. Dock the top with a fork; do not pierce the bottom layer.

Bake 18-24 minutes, or until edges are just starting to brown. Remove from the oven and place on a rack to cool for about 15 minutes. Glaze, if desired.

FILLINGS/GLAZES: I tried two fillings, but didn't measure for any of them:
1. I did a filling of a little melted butter, some brown sugar and cinnamon. For the topping, I did one glaze that was just confectioner's sugar and milk, and other glaze that had cinnamon added. I drizzled the cinnamon glaze over the plain glaze. It would have looked nicer if I had used less, but we all like lots of glaze! This one was yummy.
2. I tried to duplicate S'more Pop Tarts. I spread marshmallow fluff on the bottom, then topped with melted chocolate. For the glaze, I combined confectioner's sugar, cocoa, and milk. This didn't work. For some reason the tarts got overcooked. In addition, the fluff seemed to disappear and the filling just didn't taste like much. I wouldn't do this one again.
3. I still have some dough in the fridge and may try some jammy fillings.

I am sending this to "A Heart for Your Valentine" blog event! It will be fun to check out all the different hearts that people make!
Posted by Tracy at February 13, 2008

Those are adorable! My boys would love them! Have a great Valentines Day!

Kellogg's should make those for next year! Eat your heart out, Alton ;)

Tracy these look great! I love a good pop tart and can only imagine how good these are :)

Thank you for your participation and happy Valentine!

I love these!! Have a happy Valentine's Day!

Very cute! I want to make these so bad!!

You're a much better recipe writer than Alton :)

Gorgeous! What a cute idea! I know whatcha mean about AB's books.. they do kinda drive you a lil insane sometimes.

Tarah at Genesis of a Cook said...

Love the pop tarts! The came out so adorable!!