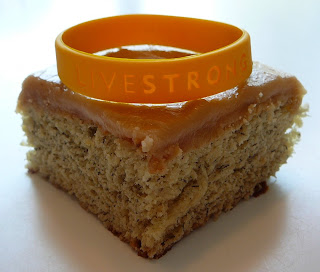 Today, the food blogging community is supporting LiveSTRONG Day with a blog event called a Taste of Yellow. LiveSTRONG Day is the Lance Armstrong Foundation's one-day initiative to raise awareness and funds for the cancer fight.

Maybe you'll want to commemorate the day by cooking something yellow. If so, you'll have 179 recipes to choose from at the LIVESTRONG A Taste of Yellow Roundup. Most of them, including my no-knead batter bread in the second part of the roundup, are probably a better choice than this one. But since I took a decent photo of the recipe, I thought I'd tell you about it. 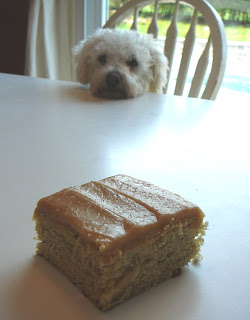 When I selected the recipe to make for this event, I wanted a really good one. To that end, I thought I'd take on Banana Bread with Salted Caramel Sauce & Meringue, which garnered Chef Stephanie Izard high marks from the judges in this season of Top Chef.

I started with the bread. The batter was thicker than any other banana bread recipe I've made. But the thing that concerned me most was the full teaspoon of salt it called for. Despite my doubts, I dumped it in.

After the bread was done, I tasted a corner. It was dense and not as moist as my favorite banana breads. But bear in mind this was served as finger food on the show, so it had to be fairly sturdy. And, unsurprisingly, it was distinctly salty. On the show, it was served with a salted caramel sauce, so maybe the salt in the bread punched up the salty flavor of the sauce. Or maybe that teaspoon of the salt was a typo on the Bravo Web site, because it's hard to imagine that the judges complimented the bread I tasted.

I decided it wasn't fair to judge the recipe unless I had all of the elements of it, so I studied the recipe for the next steps -- the meringue and the caramel sauce. And then I got really perplexed.

The caramel sauce called for egg whites, sugar, water, and corn syrup. I thought that was odd, because I've never seen a caramel sauce recipe with egg whites. And the recipe called caramel meringue had no egg whites -- a key component in meringues -- and it didn't call for the mixture to be heated until it browned -- which is how a caramel flavor is achieved. Then it dawned on me that someone mixed up the titles -- the egg white mixture was the meringue, and it wasn't meant to be caramel flavored. The other mixture was the sauce. (They have since corrected the switched titles, although the meringue is still called "caramel meringue" and the teaspoon of salt remains in the bread.) 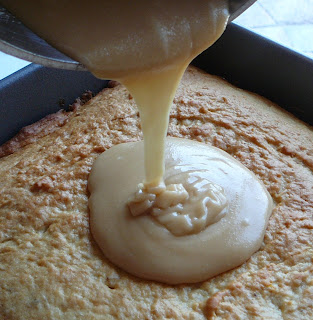 After that, I decided I didn't have enough faith in the recipe to expend the energy to make the meringue and sauce. But I wondered if a caramel icing might make the saltiness of the bread less pronounced. I used my go-to caramel icing and poured it on the bread. It helped somewhat; my salt-loving son gobbled it up. But honestly, I would make any other banana bread I've posted on this blog over this one.

Melt the butter in a saucepan. Add the sugar and the milk. Bring to a boil and continue to boil for 1 minute. Remove from the heat, add the vanilla and gradually mix in the powdered sugar.

My original directions say this icing hardens up quickly so you need to work fast, and if it hardens up too quickly, add some more milk to thin it out. I haven’t found this to be the case – in fact, I find that I need to let it cool off long enough to thicken a bit, so it doesn’t run right off the cake. This makes a lot of icing – I drizzle it in layers on top of the cake.

Banana Bread
From Stephanie Izard on the Top Chef Web site.
This makes a dense, salty bread so I would at least change the amount of salt.

Heat oven to 350 degrees. In a mixer, cream together butter and sugar; then add in bananas and vanilla. Combine dry ingredients and slowly add to batter. Mix to combine. Butter or pan spray in 9x9 inch pan. Bake for approximately 25 to 30 minutes or until toothpick comes out clean when tested.
Posted by Tracy at May 13, 2008

The amount of salt in the bread sounds odd...who knows? Maybe the judges like salt. But your caramel icing looks fabulous! You need to get that dog in commercials. He is adorable and how he sits at the table like that...too cute!

Caramel icing on banana bread...I like it!! That looks so yummy. How is your dog so good to sit and watch that!!

Wow, that is interesting. That sauce looks wonderful though!

Thanks for the comments. The icing is definitely fabulous. The bread, not so much.

My dog isn't being good, though. He's totally begging. He really shouldn't even be up on a chair with his head on the table. But I'm a softy and I let him get away with it!

Normally I wouldn't get too excited over Banana Bread but that salted caramel sauce won me over, looks delicious.

Tracy, you should make this:

It's banana bread made with peanut butter chips and mini marshmallows.

Mom, I keep telling you enter Charlie in those cutest dog competitions. He will win hands down!

The banana bread was awesome! Especially with icing!