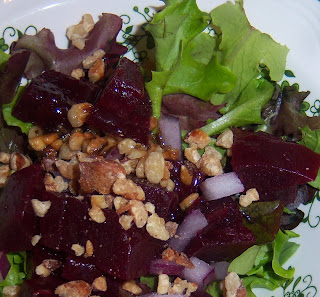 I'm on my way home from my week-long stay at my 94-year-old Grandma's house. Once it dawned on me that she didn't want me to wait on her hand and foot -- that she wanted to do things for herself -- my time with her was mostly harmonious. The only teeny weeny disagreements we had were over (of all things) cooking.

My husband will tell you -- I can be a wee bit controlling in the kitchen. Whenever he or one of the kids are doing something in the kitchen, I can't help but offer suggestions. As it turns out, I come by it honestly -- because Grandma does the same thing! But it was her kitchen, after all, and I was guilty of losing sight of that at times.

One example of this was beets. Uncle Bob pulled four final beets out of the garden -- one the size of a baseball, another the size of a softball, and two about as big as my head. OK, maybe not quite as big as my big head, but huge for beets. The latter two went into the trash, because I was sure they'd be tough and stringy.

When I brought in the two remaining beets, Grandma asked how I cook beets. I told her I roasted them. She said she always boiled them whole, so I did that. I boiled the baseball beet for our dinner, and when I thought it was tender, I sliced it and served it with butter, salt & pepper (the way Grandma said she liked them). But it wasn't quite tender enough. I left the softball beet to boil and boil and boil -- I don't know for how long but I'm guessing it may have been an hour or more. But in the end, it did become tender. I diced it and marinated it in Newman's Own Balsamic Vinaigrette (which was in Grandma's fridge).

When it was time for dinner, I served the diced beets on top of baby greens with some finely chopped red onions, chopped toasted walnuts and baby greens that had been tossed with a little more vinaigrette. I wanted to serve it with goat cheese but I couldn't find some in the grocery store in Grandma's grocery store. Sometimes I forget that I've been spoiled by Wegman's (a fact confirmed by a friend who joined us for dinner, who had moved from the Rochester area to that same part of Wisconsin). But it was still good without it.

Boil beet until very tender. When cool enough to handle, peel and chop. Put in a bowl with a bit of vinaigrette and marinate until ready to serve.

When ready to serve, toss the greens with a little vinaigrette. Top with marinated beet, red onion, and walnuts.
Posted by Tracy at October 04, 2008

I'm just like Grandma (and you). I tend to freak out if any one tries to help me in the kitchen. We had an INCIDENT a few Thanksgivings back! They'll never let me forget that meltdown.

I love beets, especially in salads!

I'll tell you what - you can be controlling in my kitchen anytime -as long as you're producing things that look this terrific :)

Yes, you have been spoiled by Wegmans! Wherever I go in the world, I never can find any shop to replace it. I'll be in NY next month so I'm hoping we can meet up!

I love beets-sounds like a tasty salad. I hate it, but I can be a teansy weansy bit controlling in the kitchen too-does that mean I'm a bad teacher? I try really hard to bite my tongue and let everyone try to do their own thing, but sometimes it's hard!;)

WHAT'S WRONG WITH BEING CONTROLLING IN THE KITCHEN?

I love that Grandma story. You're so lucky to have a grandmother. Off the beet-en track, you reminded me of a story about my husband's grandmother. She told me that the night before her wedding, her aunt said her mother should educate her a bit. She said, No, Morris will tell her everything she needs to know. The story ended there...unfortunately.

That would be a good way to get your grandmother to stop interfering in your cooking...just ask her about her sex life.