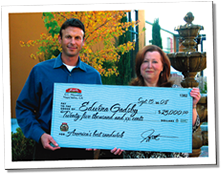 The folks at Mezzetta are holding a GREAT recipe contest, called "The Mezzetta Make That Sandwich Recipe Contest" and the deadline is soon. September 7, to be precise. I've been around the block when it comes to contests, and have a list of criteria for what makes a great recipe contest. This contest meets them all:
1. It has a great prize. In this case, it's $25K and a trip to the Napa Valley. It doesn't get much better than that.
2. There's more than one winner. In this case, two other finalists win $1,000. Also not small change.
3. There's NO ONLINE VOTING. Enough said.
4. They have good taste. Last year's winner, by my good friend Edwina, was a Spanish-Style Grilled Cheese sandwich. It sounds divine but doesn't have too many ingredients or complicated steps. In fact, I've been meaning to try the recipe.

The folks from Mezzetta sent me a couple of their products to try -- olives stuffed with jalapenos and sliced peperoncini. Thanks, Mezzetta people! I'm thrilled with them both, because one son loves olives and the other loves peperoncini. I had planned to use them to work on recipes for the contest or the blog, but but the boys keep eating them right out of the jar. The olives in particular are disappearing quickly. My son says he loves the way they "start off tasting like an olive, and end up hot."

Off to snag what's left in those jars and start experimenting for the contest. If you'd like to enter, here's a link.
Posted by Tracy at August 31, 2009

Thanks for the info about the contest. I am off to check it out.