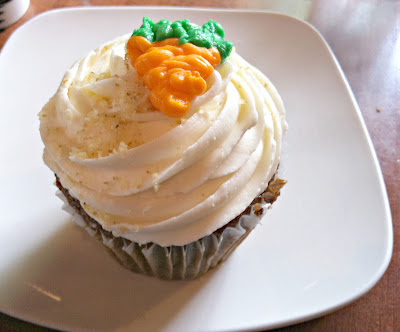 My friend and I recently paid a visit to the Chili establishment, and we were lucky enough to hit it on a day when seafood bisque was the soup of the day. The flavorful bisque was just the right consistency – not too thick – and had plenty of nice chunks of seafood. I also enjoyed the chicken salad, which had the tasty additions of cranberries and walnuts.

It’s nearly impossible to pass up the beautiful array of baked goods – cookies, cupcakes, cakes, pastries and more – without succumbing to sweet temptation. We decided on a couple of cupcakes. My friend enjoyed her Oreo cupcake. I asked a staff member if the carrot cake contained raisins, because I don’t care for raisins in baked goods. She said no, but I had a hunch that she didn’t know. Grrr… I was right. After I picked out the raisins, the cake was moist and delicious, and the cream cheese frosting was the perfect balance between sweet and tangy.

I was told the baked goods are not made in-house, but are baked by a local bakery. They are definitely a cut above those served at most coffee shop chains.

Leaf & Bean is tucked into a strip mall in Chili, but would fit right into the Park Avenue strip. The décor is eclectic, the seating comfortable and the music retro 90s (at least it was when I was there). It's an enjoyable place for a meal or even a cup of Joe.