A quiet day of baking

I woke up with a hoarse voice yesterday, and today I woke up with no voice at all. This can be a pain, such as when the phone rings, but a day of shutting up is probably good for me. It also has had its amusing moments. When I went to Rocky Mountain Pizza to get a slice, I pointed at the one I wanted. The woman behind the counter responded by speaking a few words at a time, overenunciated her words, and pointing at things in an exaggerated manner. I didn't realize why she was acting that way until she brought my order to me instead of calling out my name. Aha! She thought I was deaf -- not an unreasonable assumption in Rochester, where we have a large deaf population (the National Technical Institute of the Deaf (NTID) is located here). I didn't have the heart to clarify the situation for her.

Anyway, it's a damp, overcast day -- a great day for baking, and that's what I intend to do. I'm going to be doing some contest testing, as there are several baking-related competitions going on. 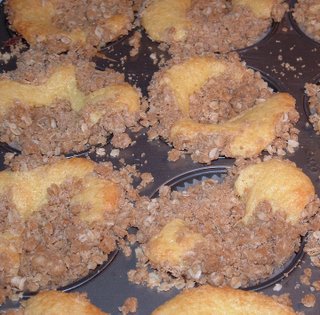 When contests come up in conversation, some people can't resist giving me ideas. I even had a friend suggest that she give me her ideas, I work them into a recipe, and we split the prize money. I tell these people that the hardest part isn't coming up with an idea -- it's turning an idea into a good recipe. This photo of a recent disaster is an example. The idea was a sort of crumb cake, which sounds simple enough. Well, obviously they didn't turn out the way I envisioned. I also thought they tasted way too sweet, but the rest of my family didn't agree. They all were eaten over the course of a few days. Although the cakes didn't wind up in the trash, the concept probably will.

While I'm on the subject of contests, I thought I'd mention that the “Desperate for Dinner” contest winner recently appeared on “Good Morning America.” The winning recipe was Shrimp ‘n Grits for the Discriminating Housewife. The other winning recipes were Sunset Chicken and Rice, White Chocolate Raspberry Mousse Cake, and Desperately Comforting Roast Beef. Considering that the contest referred to dinner, I thought it interesting that a dessert was among the winners. Anyway, the video and recipes can be found at the ABC News Web site. That really was one of the weirder contests I’ve seen.
Posted by Tracy at November 14, 2006