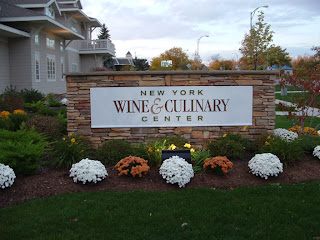 Last Christmas, my husband gave me gift certificate to the New York Wine and Culinary Center in Canandaigua. It took me awhile to redeem it, mostly because the cooking classes there fill up very quickly. Finally, my friend, Jackie, and I settled on taking a class called fall salads. The class caught my eye because the recipes included ingredients I didn't have much experience with, like lamb, duck, and fresh figs. I also thought it would give me new ideas for the bounty of fall veggies I receive in my weekly Porter Farms CSA bag (a reasonable expectation, I thought, in that the NYWCC aims to educate about New York State food).

During the 30-minute drive to the center, Jackie and I chatted about our experience with cooking classes. We've both attended several different cooking classes in the area. It got to the point, though, where we weren't learning much from them, so we hadn't attended many recently. As a result, we were looking forward to attending a chef-taught class that was a step above the classes we've taken.

The building itself lived up to what I had heard about it. It was beautiful. You can see it for yourself here. The hands-on kitchen, where our class was to be held, looked like a cook's dream. Until the door was opened, we walked around and admired the building and some of the art that was hung there.

When the door to the class opened, people moved purposefully toward certain areas in the room. Then I realized that the set-up of the class was that each stove area contained the makings of a certain recipe, and a small group made each recipe. The other areas being occupied, Jackie and I wound up at the area for Southwestern Roasted Pork Salad with Tropical Sweet Corn & Black Bean Salsa (we were later joined by a nice gentleman). I was disappointed that this was our dish, because I have cooked pork tenderloin and made similar salsas lots of times. But I tried to be optimistic. The recipe looked pretty easy, which I hoped would leave us time to wander around and watch the other teams at work.

The class started with the instructor introducing herself and her impressive credentials. Next, she briefly reviewed each recipe and gave tips. She encouraged the groups to be creative, which didn't thrill me -- when I go to a cooking class, I want to know I can replicate the dish at home. For our recipe, she demonstrated how to remove the silver skin from the pork tenderloin (something I could demo myself), and told us that we'd be using frozen corn instead of fresh, so we may want to saute it.

Our little team got along and worked together well. The salsa required lots of chopping. Jackie noticed that her mango wasn't ripe. What little cilantro we were given was brown and wilted. And although we sauteed the frozen corn, its flavor didn't approach the sweetness of fresh corn. After about an hour of chopping, we tasted the salsa. Blah -- not much flavor at all. We added salt and honey and other seasonings, and still it didn't taste like much. One of the chefs wandered by and we asked him for his opinion. He added some cider vinegar, which did perk up the flavor a bit. But it still wasn't great. 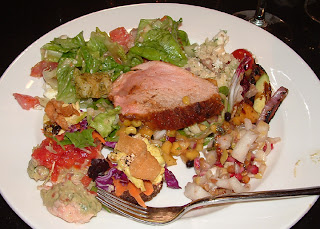 Then all the dishes were put on a central island, and each group shared information about their recipe and what they had done differently. When we said something about having a hard time getting much flavor out of the salsa, the instructor chef made a comment about Canandaigua not having the best mangos and papayas at this time of year. I really wanted to make a remark about that being the reason why we were in a FALL SALADS class -- to learn to use fresh seasonal produce from New York -- but I'm not that rude. After that, we all helped ourselves to all of the salads. This is what my plate looked like. Our salad is in the middle -- the slice of pork with the corn salsa underneath. 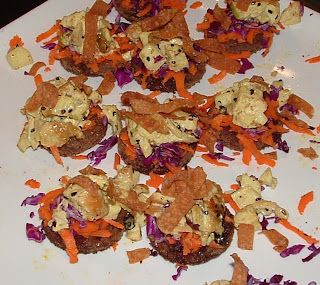 The salads were generally good, but few were "wow." The recipe that came closest to meeting my expectations was Curried Apple Chicken Salad with Crispy Wontons. It included seasonal ingredients, like shredded red cabbage and a Granny Smith apple. It had nice contrasts of flavors and textures. My only complaint is that it was messy to eat -- as you can see, the ingredients just didn't want to stay on the pumpernickle rounds.

We left with another pair of women who were sharing notes about the class. They, too, were disappointed with the produce they had been given, and didn't understand that there wasn't more of an emphasis on fall regional ingredients.

I don't feel comfortable posting the recipes from the class, because I don't want to undermine the efforts of the New York Wine & Culinary Center. Even though I was disappointed with this one class, Jackie & I agreed that we're not ready to give up on the center, and we'll probably give the classes there another shot. Maybe we'll take a class that's held in their demonstration room instead of the hands-on kitchen.

Instead of posting a recipe from the class, I thought I'd post the kind of recipe I'd include if I taught a Fall Salads class. It is easy, tasty, and loaded with fall ingredients. I spotted it on Joe's blog, and it was originally in Cooking Light magazine. 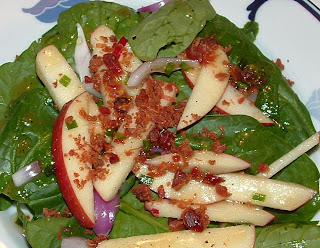 In a small bowl, whisk together maple syrup, vinegar and mustard. Drizzle in oil, whisking constantly, until completely combined. Whisk in chives, salt, pepper and bacon.

In a large bowl, add apple strips, onion and spinach. Drizzle with vinaigrette and toss well to coat.