Snacks for the band 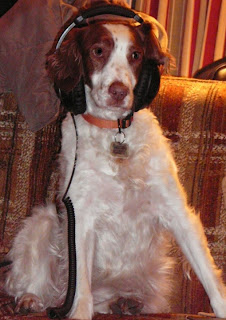 CRB spent Friday night recording our demo in the home studio of our good friend, Jim. Here's Jim's dog, Zoe, listening to a playback. I'm not sure she's happy about that take.

Anyway, my primary role in the band is to sing harmonies, which comes late in the recording process. I knew I wouldn't have much to do on Friday, but I wanted to feel useful, so I figured I'd provide some snacks.

I made two things that were quick to grab and eat, so as not to interrupt the recording process -- caramel brownies and Snack Jack pumpkin seeds.

Caramel Brownies is one of those recipes a lot of people make because the results are much greater than the effort required. It has about six ingredients, and starts with a box of cake mix. This time I added pecans over half of the base before I added the chips and the caramel. I'm never sure whether or not to add nuts to things, because lots of people don't like nuts. Well, the band vastly preferred the version with the nuts. 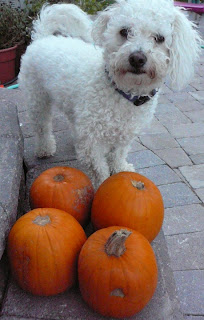 Snack Jack Pumpkin Seeds, on the other hand, require a bit of effort. Every time I make them I kind of grumble and wonder if it's worth the trouble -- but in the end I think the results are worth it. I don't really follow a recipe but I'll tell you how I did it.

The most important ingredient is seeds from Snack Jack pumpkins. Here's Charlie with four of this variety of pumpkins (hey, I couldn't show a really cute dog on my blog without showing my own). These pumpkins are grown specifically for their hull-less seeds. I got mine at Wickham Farms. I'm not sure where else Snack Jack pumpkins are sold, so if you want to make this recipe, you may have to make a special trip to Wickham Farms next year. 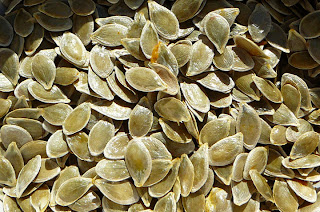 The first step of the process is to cut open the pumpkins and scoop out the seeds. Snack Jack pumpkins don't have tons of seeds -- the four pumpkins shown yielded just over 2 cups of seeds that are darker in color than other pumpkin seeds.

My personal preference is to get rid of all the orange goop, so I spread them out on paper towels, and pick off the orange stuff that clings to the seeds. Then I put the seeds in a colander, rinse them, and spread them out on more paper towels. When I'm done, they look like the photo to the left. This is the most time consuming part of the process. Maybe you don't have to be as fussy as I am about it.

The next step is to dry out the seeds. I put them on a couple of baking sheets that have been sprayed with cooking spray, and I bake them at 200 degrees for about an hour. 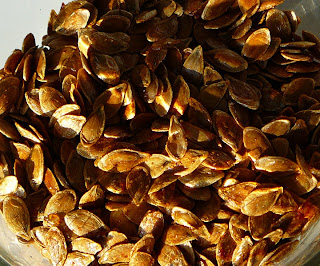 Turn the oven up to 275 and bake them for another hour, stirring every 20 minutes. After 40 minutes have gone by, taste and adjust seasonings. At this point I added some more salt and a sprinkling of Cajun seasoning from the Dinosaur BBQ.

As you can see, they turn out a lot browner than other pumpkin seeds, and much crispier. I like them that way (and I think the band did, too). If you don't, you probably could bake them at a lower temperature or take them out sooner.

As expected, CRB made really good progress on the demo on Friday, but we didn't get to recording most of the harmonies. But the band really enjoyed my snacks!
Posted by Tracy at November 04, 2007

Sing, it, sister! Personally, I think it's pretty cool that you rock it out with a band... Another outlet for your overflowing creativity!