Throwdown Cheesecake: My Best Baking Project of 2007 (that I didn't blog about)

Sometimes it's not good to have kids who watch the Food Network.

When I asked my 9-year-old son what kind of a birthday cake he wanted, he said, without a pause,

"Remember the cheesecake episode of "Throwdown with Bobby Flay?" I want the cake that won that episode -- the one with three layers of chocolate cake and a layer of cheesecake.

And I want it to have kids with sleeping bags on it.

And a roller coaster."

Surely I told him that he was off his rocker.

Well, no, actually I didn't. I like it when my kids think creatively. And it made perfect sense. He had been talking about that cake since he saw the show. Sleeping bags because he was having friends sleep over. A roller coaster because we were taking him and his guests to Seabreeze first.

Plus, I like a challenge. So I did it. And it wasn't too bad. The secret was doing the project over two days.

I found the recipe on the Food Network Web site. The first step was making the cheesecake layer, cooling it, then freezing it. The next step was making the three chocolate cake layers, which also was a piece of cake (ha, ha, couldn't resist). And unlike my usual tendency to try to do too much in one day, I called it a day. That gave the cakes plenty of time to cool and the cheesecake time to freeze.

The next day I frosted and decorated the cake. The frosting in the recipe was easy to prepare and use. The frozen cheesecake layer wasn't any harder to handle than any other cake layer. 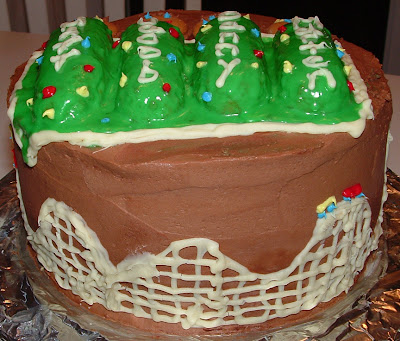 For the roller coaster, I made an old-fashioned wooden roller coaster, like the Jack Rabbit at Seabreeze. I melted white chocolate and created the coaster in sections on wax paper. After it cooled and solidified, I transferred the sections to the side of the cake, and touched up the whole thing with more melted white chocolate. I'm not sure I'd use that technique again. It didn't end up looking perfect, but I think you could tell it was a coaster. 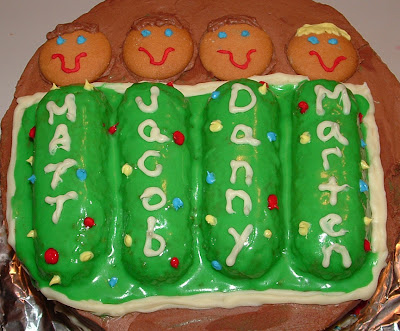 I got the idea for the kids in sleeping bags from Family Fun Magazine. Instead of frosting, I thought I'd use a glaze that would flow over the Twinkies and look like a blanket. Well, the glaze (which I made out of confectioner's sugar, milk and corn syrup -- don't ask me the amounts) was too thin and the Twinkies could be seen underneath. I disguised the worst spots with dots of colored frosting.

In the end, the cake wouldn't win any contests, but my son was thrilled with it, which was all that mattered. 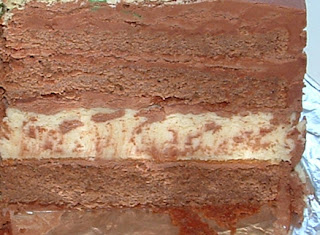 How did it taste? The kids enjoyed it, although some of them didn't eat the cheesecake layer. The parents who had a piece raved about it.

I wasn't wowed by it. The cheesecake layer was just right -- firm enough to hold its shape in the cake without being dry. The chocolate cake was fairly dense, which was ok -- I'm sure it had to be to support cheesecake layer. But to my taste, neither the cake nor the frosting was chocolate-y enough. But maybe I've been spoiled by the Wegmans Ultimate Chocolate Cake. Finally, I think the three layers of chocolate cake (which is the way it was shown in the TV show and the way it is described in the recipe) is overkill. If I decided to make this again, which I probably wouldn't, I would make two layers of chocolate cake instead. That is actually the way it was shown on the Junior's Cheesecake Web site.

Still want to make the recipe? Well, here it is, with a few notes and modifications from me.

Rah Cha Chow note: This was originally written as a one-day process. I edited to make it a two-day process. Make the cakes the first day, then frost the second day. Trust me.

(The recipe also called for chocolate curls, which I omitted. If you want to make them, use the recipe from the Food Network.)

Preheat the oven to 350 degrees F and generously butter the bottom and sides of one 9-inch springform pan (preferably a nonstick one). Wrap the outside with aluminum foil, covering the bottom and extending all the way up the sides.

To make the cheesecake layer, put one package of the cream cheese, 1/3 cup of the sugar, and the cornstarch in a large bowl and beat with an electric mixer on low until creamy, about 3 minutes, scraping down the bowl a couple of times. Blend in the remaining cream cheese, one package at a time, scraping down the bowl after each. Increase the mixer speed to medium and beat in the remaining 1 cup sugar, then the vanilla. Blend in the eggs, one at a time, beating well after adding each. Beat in the cream just until it's completely blended. Be careful not to overmix!

Gently spoon the batter into the foil-wrapped springform and place it in a large shallow pan containing hot water that comes about 1 inch up the sides of the springform. Bake the cake at 350 degrees F until the edges are light golden brown and the top is slightly golden tan, about 1 1/4 hours. Remove the cake from the water bath, transfer to a wire rack, and cool in the pan for 2 hours, cover with plastic wrap, and refrigerate (while still in the pan) until it's completely cold, about 4 hours. Place in the freezer and freeze overnight or until ready to assemble the cake.

Meanwhile, prepare the devil's food cake layers. Check that the oven is preheated to 350 degrees F and that the water bath has been removed. Generously butter the bottom and sides of three 9-inch round layer cake pans. It is important to line the bottom of all three pans with parchment or waxed paper. Trace the bottom of your pan onto wax paper or parchment, cut out the circle, then use it to line the pan.

Sift the flour, baking powder, and salt together in a small bowl. Cream the butter and both sugars together in a large bowl with the mixer on medium until light yellow and creamy. Add the egg yolks, one at a time, beating well after each. Beat in the melted chocolate and vanilla. Using a wooden spoon, stir in the flour mixture, alternately with the milk, mixing well after each until blended.

Put the egg whites and cream of tartar in a clean medium-size bowl and beat with clean, dry beaters on high until stiff (but not dry) peaks form. Fold about one-third of the whites into the chocolate batter until they disappear, then gently fold in the remaining whites. Don't worry if you still see a few white specks--they'll disappear during baking. Divide the batter evenly between the three pans. Bake until a toothpick inserted in the centers comes out with moist crumbs clinging to it, about 30 minutes. Cool the cakes in the pans on a rack for 15 minutes, then remove the cakes from the pans and gently peel off the paper liners. Let cool completely, about 2 hours, then cover with plastic wrap and refrigerate overnight or until ready to assemble the cake.

Make the frosting: In a large bowl, sift the confectioners' sugar, cocoa, and salt together. In another large bowl, cream the butter with a mixer on high until light yellow and slightly thickened, about 3 minutes. With the mixer still running, beat in the chocolate, corn syrup, and vanilla. Reduce the mixer speed to low and beat in the sugar-cocoa mixture in two additions, beating well after each. Blend in the cream until the frosting is a spreading consistency, adding a little more cream if needed. Whip the frosting on high until light and creamy, about 2 minutes more.

To assemble the cake, remove the cheesecake from the freezer and let stand at room temperature about 10 minutes. Place one layer of devil's food cake, top side down, on a cake plate and spread with some of the frosting. Release and remove the ring of the springform, then remove the frozen cheesecake from the bottom of the pan. Place top side down on the frosted cake layer and spread with some frosting. Top with the second devil's food layer, top side down. Spread with more frosting and cover with the third devil's food layer, top side up. Brush away any crumbs from the sides and top of the fudge cake layers. Frost the sides and top of the cake with the remaining frosting, spreading the top with frosting about 1/2 inch deep. Use a long metal spatula that has been warmed under hot running water to smooth out the frosting on the sides and top of the cake. Decorate as desired.

Refrigerate the cake for at least 2 hours to allow the cheesecake to thaw enough to easily slice. Use a sharp straight-edge knife, not a serrated one, to cut it. Cover any leftover cake with plastic wrap and refrigerate, or wrap and freeze for up to 1 month.
Posted by Tracy at December 28, 2007

HI It's Tracy Ubbink-now Spice here...and I'm looking for my school mate back in East Rochester named Tracy ABbott I put in a search and got this blog....is that you "abbey"?
If so please contact me and I can get you your photos back! I have a couple of baby photos. If not I enjoyed reading about your sons cake...now I want cheesecake & chocolate...mmmm!
Thanks,
Tracy Spice (ubbink) Tracy.spice@gmail.com

What a cool name you have - Tracy Spice. If I chose a name to have, that might be it. Unfortunately, both my married name and my maiden name are hard-to-spell German names. And neither one is Abbott.

And I actually went to Carmel High School for Girls in Mundelein, Illinois. So no dice there, either.

Thanks for stopping by, and good luck in your search for Tracy Abbott!

I just watched that Throwdown episode last night! That chocolate cheesecake looked really good, so I don't blame your son for wanting it.
I've looked at that recipe before, but decided it looked like too much work.
So I have to give you props for making it, and doing all that decorating.

OMG - This is the cheesecake that towers over all other cheesecakes. Way to go!! Happy New Year!

Tracy - That is just too funny! I definitely have to stop by more often, you always give me a giggle!

And good for you for going with his wishes - such a good mom! I probably would have stuck with the "off your rocker" comment. ;-)

Ladies,
Thanks for the compliments! I know my fellow bakers appreciate the effort, even if the results aren't perfect.

I LOVE that story. And I think that any child that shares his mother's interests that much and actually responds with more than a mumble (oh, wait, he's not a teenager yet, and, even more, he's not a teenage daughter) should be rewarded big time.

My advice is that the next time you're watching a show and someone makes a 15 layer, 5 flavor, fondant, buttercream AND royal iced cake, you change the channel...QUICK.

No, thankfully my younger son doesn't display a lot of attitude ... yet.

He often wanders in and watches whatever I have on TV. And I'm surprised that quite a number of food programs aren't appropriate for kids.

Some I watch after the kids go to bed: Anything with Gordon Ramsay and his foul mouth (yes, my kids have heard me mutter expletives, but he's over the top). Anthony Bourdain and his smoking and enthusiasm toward drinking and mind-altering rituals.

But the one who has been permanently banished from my Tivo list: The dude who makes the cakes. Duff? I shudder to think of what my son would be asking for if he caught one of those shows. Scary.