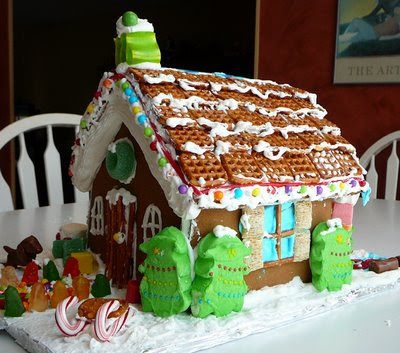 I can't quite explain what happened to our gingerbread house this year. It started out nice enough. I bought the pieces at Wegmans, made several batches of Martha Stewart's royal icing, put together the house, and was ready for our day of decorating with another family with whom we've been decorating gingerbread for years. D asked what theme we were going to do, but after last year's disaster, I suggested we go theme-free and just decorate a nice house. And that's where we started. You can see that it came out fairly nice. It's in the details where the house ... well, let's just say it really deviates from the usual Christmas spirit. And I have nobody to blame but myself. 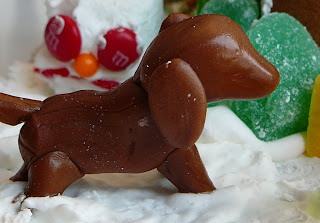 It all started when Tom made a perfectly nice dog out of Tootsie Rolls and placed it in front of our house. (By the way, that cute dog pales in comparison our friends' character creations ... but you'll have to check back tomorrow to see those.) 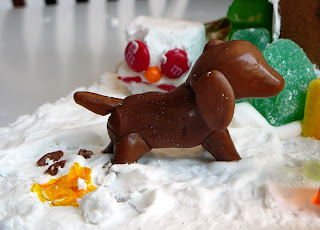 What I did to the dog I can only attribute to more than a decade of living in a household of nothing but males. It was pure impulse. All it took was a drop of yellow food coloring and a few bits of Tootsie Rolls to send us down a completely different creative path. The boys, needless to say, loved it. (I ignored Tom's groans and eye rolling.)

Upon seeing that, B got the idea of doing some decorations based on Calvin & Hobbes cartoons that depicted Calvin making some demented snowmen. Now you have to understand, B is talented in many ways, including being a gifted musician, but he has never had any aptitude for art. In grammar school, he got his lowest grades in art (proving that it actually is possible to get a low grade in art). When we do gingerbread decorating, he usually spends the afternoon eating the candy and asking when he can go play. So with B suddenly and unexpectedly excited about working on our gingerbread house, we had no choice but to let him go ahead with his ideas.

What B's decorations lack in artistic skill they make up for in imagination. To help you understand what they are supposed to be, you need to see the cartoons on which they are based. Cartoon #1:

... and here's B's interpretation of the cartoon. The fins of the snow sharks were created out of vanilla Tootsie Rolls. 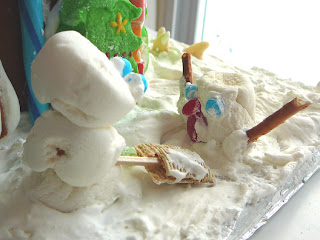 And B's interpretation of the second panel. I think his dad may have helped with the shovel, which was made from a toothpick and piece of shredded wheat cereal.

Honestly, I think our gingerbread house suits us. It probably will be one of those "remember when..." stories that the boys tell, like the time D. peed in a cup when we were stuck in a traffic jam in Chicago. But that's another story, probably not suited for a food blog.

I am submitting our house to a gingerbread house blog event on YumSugar. Wanna bet nobody has a theme like ours?
Posted by Tracy at December 17, 2007

Tracy - That is too funny! I agree that it is a holiday memory that your boys will never forget :)

I think the male humor has finally worn you down....!

The first picture looked so pretty, and I was getting ready to compliment you, but then...
I actually burst out laughing when I saw that little dog, and what he left behind! That's exactly something my family would do.
Mmm, I'm hungry for gingerbread now.
That other story sounds interesting, but I'm not sure I want to know what happened!

that sounds like many ideas come up at once and transferring the idea from the cartoons is quite neat! the dog looks really happy. happy holidays.

I love it all, that doggy is really cute too!
What a fun and fabulous concept!

Really fun! I love that the whole family got involved, and the humor just makes it so much more fun. Especially since you said your dog doing it's business inspired the snowmen carnage. Sounds like a delightful way to spend a day together as a family.

I'm glad you guys enjoyed this. It's probably immature, but I think our gingerbread house kind of captures the spirit of our real house.