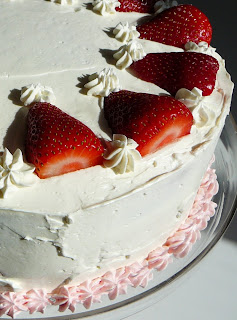 This month's Daring Bakers challenge was a convenient one for me, because it was a dessert I could serve on Easter. It was a party cake by Dorie Greenspan that had lots of room for creativity. I decided on a lemony cake and frosting, with strawberry jam in the middle and strawberries in the middle and on top.

The directions called for the cake to be four layers, but I didn't find the layers to be thick enough to cut in half, so I made a two-layer cake. The other change I made was to use all-purpose flour instead of cake flour, using two fewer Tablespoons per cup of flour, and adding two Tablespoons of cornstarch.

The recipes for the cake and frosting were well written and easy to follow. It all came together without incident, and I think the cake ended up looking pretty nice. 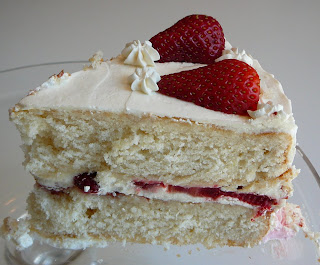 I'd like to say that the cake tasted as good as it looked, but it didn't. The cake was a bit dry and not as lemony as I would have liked. That may have been because of a typo in the recipe provided to us -- a measly 1/4 cup difference but who knows -- or maybe that was because of the flour substitution?

The frosting was unlike anyone I've ever made, both in technique and in taste. The frosting started with egg whites and sugar. They were cooked until the mixture was white and shiny, then beaten in a mixer until it cooled. It looked like marshmallow fluff. Three sticks of butter was added, followed by some lemon juice and vanilla. The end result was shiny, fluffy, and easy to work with. I know people who find many frostings to be too sweet, so this would appeal to that kind of person. But I'm not one of them. I would have liked it to be a bit sweeter and a bit more lemony. 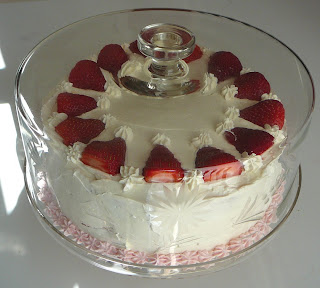 For Finishing: strawberry preserves and strawberries (about one pound).

Getting Ready
Center a rack in the oven and preheat the oven to 350 degrees F. Butter two 9 x 2 inch round cake pans and line the bottom of each pan with a round of buttered parchment. (I did not put the pans on a baking sheet as directed -- I don't have the right size baking sheet.)

To Make the Cake
Sift together the flour, baking powder and salt. Whisk together the milk and egg whites in a medium bowl.

Put the sugar and lemon zest in a mixer bowl or another large bowl and rub them together with your fingers until the sugar is moist and fragrant. Add the butter and working with the paddle or whisk attachment, or with a hand mixer, beat at medium speed for a full 3 minutes, until the butter and sugar are very light. Beat in the extract, then add one third of the flour mixture, still beating on medium speed. Beat in half of the milk-egg mixture, then beat in half of the remaining dry ingredients until incorporated.

Add the rest of the milk and eggs beating until the batter is homogeneous, then add the last of the dry ingredients. Finally, give the batter a good 2- minute beating to ensure that it is thoroughly mixed and well aerated.

Divide the batter between the two pans and smooth the tops with a rubber spatula. Bake for 30-35 minutes, or until the cakes are well risen and springy to the touch – a thin knife inserted into the centers should come out clean. Transfer the cakes to cooling racks and cool for about 5 minutes, then run a knife around the sides of the cakes, unfold them and peel off the paper liners.

Invert and cool to room temperature, right side up. (I made a few days ahead and froze.)


To Make the Buttercream
Put the sugar and egg whites in a mixer bowl or another large heatproof bowl, fit the bowl over a plan of simmering water and whisk constantly, keeping the mixture over the heat, until it feels hot to the touch, about 3 minutes. The sugar should be dissolved, and the mixture will look like shiny marshmallow cream. Remove the bowl from the heat. Working with the whisk attachment or with a hand mixer, beat the meringue on medium speed until it is cool, about 5 minutes.

Switch to the paddle attachment, and add the butter a stick at a time, beating until smooth. Once all the butter is in, beat in the buttercream on medium-high speed until it is thick and very smooth, 6-10 minutes. During this time the buttercream may curdle or separate – just keep beating and it will come together again. On medium speed, gradually beat in the lemon juice, waiting until each addition is absorbed before adding more, and then the vanilla. You should have a shiny smooth, velvety, pristine white buttercream. Press a piece of plastic against the surface of the buttercream and set aside briefly. 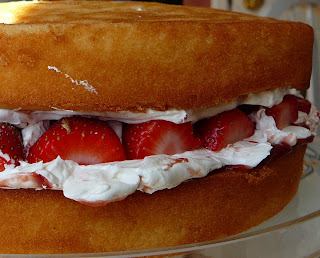 To Assemble the Cake
Put one layer, domed side up, on the cake stand (use a dollop of icing beneath the first layer to keep in tin place). Spread it with strawberry preserves. Cover the jam evenly with the buttercream. Top with sliced strawberries. Spread top layer with a small amount with the frosting, then place, frosting side down, against the strawberries.

Use the remaining buttercream to frost the sides and top of the cake. Decoratively garnish with strawberries.

Serving (directions from Dorie, no changes)
The cake is ready to serve as soon as it is assembled, but I think it’s best to let it sit and set for a couple of hours in a cool room – not the refrigerator. Whether you wait or slice and enjoy it immediately, the cake should be served at room temperature; it loses all its subtlety when it’s cold. Depending on your audience you can serve the cake with just about anything from milk to sweet or bubbly wine.

Storing
The cake is best the day it is made, but you can refrigerate it, well covered, for up to two days. Bring it to room temperature before serving. If you want to freeze the cake, slide it into the freezer to set, then wrap it really well – it will keep for up to 2 months in the freezer; defrost it, still wrapped overnight in the refrigerator.
Posted by Tracy at March 30, 2008

Beautiful Cake Tracy! Who doesn't love fresh strawberries, I'd so love a piece of this right now!!

Nicely done. I love the strawberries, especially fresh ones. I suspect the extra flour didn't help the cake itself, so perhaps you could try it again with less flour and more lemon.

Tracy your cake looks delicious! I'm a berry fan so I can't stay away from any fresh berry cake.

Your cake looks so tasty! I'm loving the fresh strawberries - I probably would have had them eaten before the cakes came out of the oven!

Sorry you didn't like it. It does look lovely!

Perfect party cake. I mean, I'd go staight for it and forget the potato chips and ranch dressing!
Nice job, Tracy!

It looks beautiful! I do wonder if the typo made a difference - I made mine from the book, and my cake wasn't dry at all. Great job, though!

It looks beautiful! I threw in some lime zest which really upped the flavor of the cake, but I find I'm still more of a yellow cake fan than white cake.

A very beautiful cake.. it makes me drool!

Very pretty... I love the way you decorated it :)

I want one of those glass cake domes! You made a very pretty job of your cake - sorry about the typo.

Your cake looks so pretty-- I'm sorry that it didn't turn out that tasty but at least there were the strawberries. I have definitely been guilty of eating all the strawberries off an otherwise mediocre cake...

I'm so bummed that the cake wasn't totally delicious - I love lemon and berry flavors together...darn....

Wow that looks stunning and so delicious. Well done

Wow it looks so summery. I love the filling. Really well done

PS- After seeing your 'leave your comment' message, do you post links to fun & cheery Mom blogs? ;)

You did a fabulous job on your cake!