A good dish ruined by a few flakes!

I wrote this post and then hit "preview" and saw that it looks like I'm calling this woman a flake. I'm not, really -- I like her! I'll get to the flake reference soon...

Anyway, if you don't recognize her, she's Anne Burrell, star of "Secrets of a Restaurant Chef" on the Food Network. If you haven't caught that show yet, you may recognize her from "Iron Chef America." Anne is (was?) one of Mario Batali's chefs, and she's easy to spot by her spiky yellow/blonde hair.

Her show debuted this year and I think it has been met with some mixed reviews because of her big personality. Me? I like her a lot. I like that she's not skinny and that she doesn't wear low-cut shirts and that she seems real. She uses words like "crud," which you don't hear much on the Food Network. Plus, from watching ICA I know that she kicks butt in the kitchen. The only thing I don't like is that she does this growly thing, like she's Louis Armstrong, when she's talking. A lot. I do a little of that when I'm singing "Sweet Home Chicago" in the band, but a little goes a long way. It gets annoying after awhile, plus it's not good for your voice. Anne -- love ya tons, but give your voice and your viewers a break, and cut back on the growly voice. 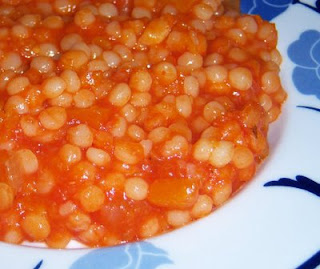 Anyway, I thought I'd try one of her recipes, and the one that caught my eye was Fregula with Braised Butternut Squash, because I had the ingredients on hand (except for Fregula, but I did have Israeli Couscous, which she said was a good substitute).

This recipe calls for butternut squash in 1/4-inch dice. Funny thing, they don't show her doing the chopping on the show. After doing it, it's no wonder! It takes for-friggin'-ever!

Other than that, this recipe was easy to pull together and was a different use for butternut squash. Unfortunately, when I tasted the dish, I went "YOW!" because it was REALLY hot. My "pinch" of of red pepper flakes must have been generous! If I ever made it again, I'd measure the red pepper flakes in an 1/8 teaspoon. Restaurant chefs can get away with not measuring, but I really can't.

Also, you don't see any chives, which were called for in the recipe. That's because I sent my husband to the store for chives, and he returned with rosemary! It didn't matter, though. Once I had tasted the overly hot dish, I wouldn't have wasted the chives in there. I toyed with adding extra chicken broth and making it into a soup, but I didn't bother. I might make this again, with the rest of the 1/4-inch squash cubes I cut and froze.

Coat a large saucepan generously with extra virgin olive oil. Add the onions and bring to a medium high heat. Season generously with salt and add the crushed red pepper. Saute until the onions are translucent and very aromatic, about 7 to 8 minutes. Add the garlic and saute for another minute. Add the tomatoes. Rinse the tomato can with water and add to the pan. Season with salt and cook over medium heat for about 10 to 15 minutes or until the water has reduced. Add the squash, stock, and bay leaf. Taste for seasoning and season with salt if needed. Cook until the squash is cooked through and most of the liquid has absorbed, about 20 to 30 minutes.

Bring a pan of well-salted water to a boil. Add the fregula and cook until it is cooked through but still al dente, about 8 to 10 minutes. Strain and add to the pot with tomatoes and squash. Stir to incorporate. Add more stock or water if the mixture is dry and cook longer if it is too soupy. When done it should have a stew-like consistency. Stir in the chives. This will be really good today but even better tomorrow!
Posted by Tracy at November 09, 2008

I haven't caught her yet. I used to like Sara Moulton because when she'd mess up she'd always say "Yours won't look like this."

It still looks great even with all the trouble you had!