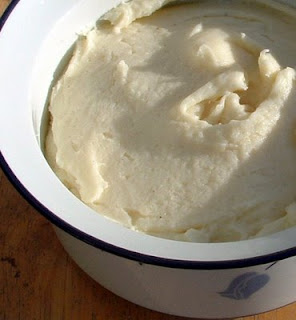 At my Aunt Sue and Uncle Mike's house on Thanksgiving, the whole family pitches in. Everyone brings a dish -- the same one every year -- and there are a lot of people in the kitchen when it's time to do the last-minute tasks. Dad carves the turkey (in his undershirt). Uncle Jim makes the gravy (with giblets, which my generation don't like). And at some point in my childhood, my job became making the mashed potatoes. Someone would peel, boil, and drain the potatoes, and then I'd use the hand mixer to mash them, adding butter and milk along the way. We'd taste them until they were right. I liked my job. I felt important and grown-up, working in the kitchen with the adults.

Then I moved to Western New York and wasn't home for every Thanksgiving. The next time I went to Aunt Sue's house for Thanksgiving, I wandered into the kitchen when I thought it was about time for me to make the mashed potatoes.

"When you left, we switched to Butter Buds," Aunt Gretta said. "Nobody knew the difference, so we just stuck with them."

Ack. I was so disappointed. My important job displaced by a box of flakes. And I could tell the difference. At least I thought I could.

Luckily, my cousin, Kristen, married Dan, who was from New Orleans. Folks from New Orleans are accustomed to really good food and Dan is no exception. Dan has brought all kinds of taste treats to Thanksgiving dinner -- Turducken graced the table one year -- but the best has been real mashed potatoes, made ahead and rewarmed in the slow cooker. As much as I miss being a part of the last-minute hustle-bustle in the kitchen, at least we're eating real potatoes again.

I don't know exactly which recipe Dan uses -- I've tinkered around with various versions -- but all in all it's pretty forgiving. You can use less of one "add-in" and more of another. I usually use Russets, but Yukon Golds are also good. The one thing you can't do is rewarm them in a hot oven (like 400 degrees). Take it from me, because I've done it. The side and bottom develop a brown crust that people don't like in their mashed potatoes.

Place potatoes in a large pan with water to cover. Bring to a boil. Reduce heat and simmer, covered, until tender when pierced with a thin-bladed knife, 20 to 30 minutes.

Using a potholder, peel and drop them into a bowl. Mash using a standing mixer fitted with the paddle attachment. You may have to do this in two batches. (One recipe I have says you can process unpeeled potatoes through a food mill into a medium bowl. I haven't tried this method but I plan to.)

In a large bowl, mix mashed potatoes, cream cheese, sour cream, and butter. Gradually add milk until the mixture reaches your desired consistency (you may use less or more). Season with salt and pepper. Transfer to a large casserole dish or slow cooker insert. Refrigerate until needed -- can be done up to two days head of time.

Email ThisBlogThis!Share to TwitterShare to FacebookShare to Pinterest
Labels: Side dish recipes

That was so funny! I love Dad in his undershirt. Now THAT is what the holiday is all about. The part about the Butter Buds was a riot.

You can also put the mashed potatoes in a big stainless steel bowl and keep them warm over simmering water. That is, if you have a burner left.

I know years ago I made mashed potatoes that way. I'm going to try your recipe this Thanksgiving because so much is going on in the kitchen at the last minute.

Butter Buds would never make it to feed my family.

This is exactly what I'm bringing to my In-Laws for Thanksgiving, because if I don't, we'll be faced with mashed potatoes made from canned potatoes. Ick. I'm bookmarking your recipe to compare with mine... I think they're pretty similar. Thanks!!

OUTSTANDING. It's early Thanksgiving morning right now as I type. I have 30 people showing up in about 8-hours. Like every year, I made my mashed last night (8-Lbs. of Yukon Gold, un-peeled, with sautéed leeks & sour cream). Last year I ruined this great side dish by trying to re-warm at too high a temp for too long. The consistency and texture of the dish broke down and became soupy; just gross and disappointing. Using the slow cooker is an excellent tip - exactly the type of advice I was looking for when I googled "rewarm mashed potatoes". Thanks!