As I was making my recipe for Bread Baking Day #14, I was reminded of a story from a few summers ago, when our family hosted a boy named Tyrod through the Fresh Air Fund.

My younger son was so excited to show Tyrod, who was from Harlem, everything he might not have experienced in the big city. My son made lists of things to show Tyrod and places to take him. One of the first things my son proudly showed Tyrod was our small, overgrown garden, and the pickles we had made from the cucumbers that had grown there.

Tyrod was impressed with a lot of things -- our pool, our basketball hoop, our car (a Plymouth Voyager with about 100,000 miles on it), our basement (he hadn't been in a house with a finished basement) -- but one thing he was not impressed with was our homemade pickles.

"They don't sell pickles in stores here?" he asked. He couldn't understand why we'd go to the trouble of growing cucumbers and making the pickles when you could get perfectly good ones at the store. It cracked me up. 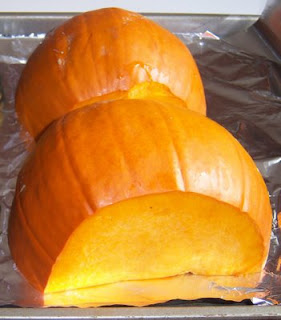 When I cook fresh pumpkin to use in baking, I often get a reaction that reminds me of Tyrod and the pickles. Canned pumpkin is so inexpensive that cooking fresh pumpkins seems hardly worth the effort. I have nothing against canned pumpkin, but I think that the bright orange color of cooked fresh pumpkin is so much prettier than the brownish color of canned pumpkin. That's why I figured a pumpkin bread from fresh pumpkin would be a good contribution to November's Bread Baking Day, which has a theme of colored breads (many thanks to Boaz, the event's host).

Roasting a pumpkin is easy. Just wash the pumpkin and cut off the stem end (although I've seen recipes that leave the stem on). Cut in half through the stem end. Scoop out the seeds -- I use a grapefruit spoon that has jagged edges. Place cut-side down on a baking pan lined with foil. (I have seen recipes to put water in the pan -- you don't need to do that. ) 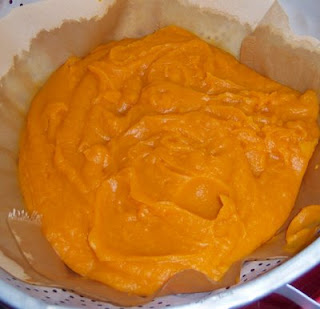 Once the pumpkin is cool enough to handle, scoop out the soft insides and discard the skin. Put it in a food processor and puree.

Now, there's a very important trick to getting the pumpkin to the consistency that you can use it in recipes calling for canned pumpkin, and a lot of recipes skip it.

Line a colander with coffee filters and place the colander in a large bowl. Spoon the pureed pulp into the lined colander and let sit for a few hours. You will find that a lot of liquid drains into the bowl that's under the colander. From the two pumpkins I cooked, about a cup of water drained out, and I was left with a little more than two cups of puree to use in recipes. Now the pumpkin is ready to be used in a recipe!

I wanted to make some mini loaves to freeze and give as hostess gifts during the holiday season, and this was a new recipe to me. If I were to be perfectly honest, I'd say that the bread looked and tasted good, but was not worthy of ooh's and aah's. You could barely see where the streusel was -- maybe it needed more cinnamon for color and flavor. The loaf was moist and flavorful, but not that much better than a healthier pumpkin bread recipe I've made in the past. Given that these loaves took 3/4 of a pound of butter, next time I'll probably use my healthier recipe and tinker with the streusel for it. 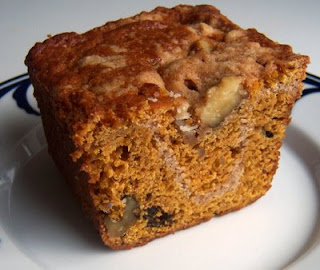 Mix together the flour, brown sugar, cinnamon, and salt in a small mixing bowl. Using a pastry blender, cut in the butter until it creates pea-sized crumbs. Set aside.

In a medium mixing bowl, whisk together melted butter, sugar, pumpkin, milk, eggs, and vanilla until combined. In another bowl, sift together flour, cinnamon, baking soda, salt, ginger, nutmeg, baking powder, and half of the chopped walnuts. Add flour mixture to pumpkin mixture and mix with a rubber spatula just until combined. Do not overmix.

Bake until the top is golden brown and a toothpick inserted into the center comes out clean, 45 to 50 minutes.

Transfer the pan to a wire cooling rack and let cool for 15 minutes. Using a thin knife or spatula, release the bread from the pan and let cool to room temperature. Makes 7 small loaves.
Posted by Tracy at November 24, 2008

Email ThisBlogThis!Share to TwitterShare to FacebookShare to Pinterest
Labels: Bread recipes, Gifts from my Kitchen

These look great. I love mini anything.

Thanks for the draining tip...I always use home-baked pumpkin, but now I think it will be even better!

That looks wonderful! I've never baked a pumpkin but when I do I'll remember your tip about draining. I once made a pumpkin cheesecake from Cook's Illustrated and they had you roll up the pumpkin puree (yes, mine was canned) in paper towels to get out the excess moisture.

Julie, I used to use undrained pumpkin but found I was having trouble with some recipes. I found this tip somewhere (online?) and it's made all the difference.

Susan, with all the wonderful breads you've made on your blog, it's hard to imagine you've never baked a pumpkin! That's interesting about the CI recipe.

These look really good. Thanks for the tip about draining the pumpkin.

I think making pumpkin puree is fun. I forgot to drain mine, though. :( Thanks for the tip.