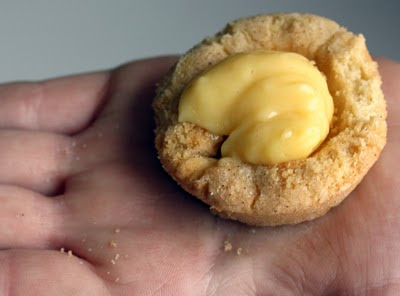 Note that the title of the post is Eggnog-Filled Cookie Cup, not Cups. That's because exactly one of this recipe came out. This is it.

It's irritating whenever a cooking disaster happens, but it's especially so whan it happens to a 13-year-old cook. Young cooks don't have the experience to know that when a disaster happens, it's as likely to be the fault of the recipe as it is of the cook. I'm fairly convinced that this is the fault of the recipe because I was around when he was baking.

My son loves eggnog (I don't) so he was excited about making this recipe, from his own cookbook, Best-Loved Cookies and Bars, published by Taste of Home. It consisted of two elements: an eggnog pudding and cookie cups. 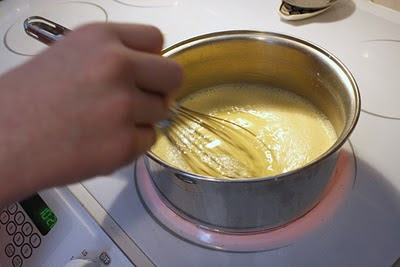 The first task was making the eggnog pudding, which consisted of pudding mix, eggnog, milk and vanilla extract (which he used instead of rum extract). The instructions said to bring the mixture to a boil. Because the mixture was foamy, it was hard to tell when it was boiling, but eventually some fat, thick bubbles broke the surface. 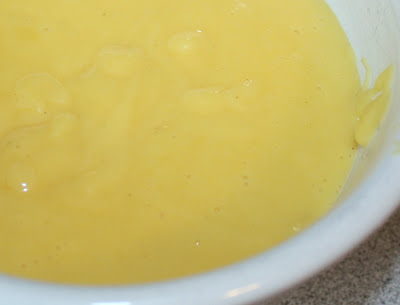 The pudding was put in a bowl, covered with wax paper, and cooled. THAT part of the recipe my son loved. But then came the cookie cups, which were pretty fussy. 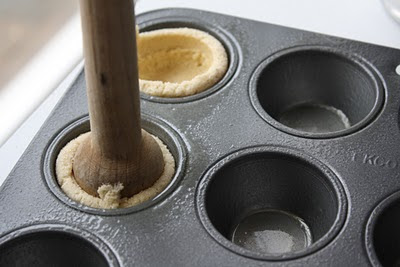 You make a dough (which I noticed was very soft), form it into balls, roll the balls in a sugar/allspice mixture and put them in mini tart pans. (We sprayed those tart pans well with cooking spray.) The directions said to use floured fingers to press the dough up the sides of the pan, which is not an easy task. Luckily, I had this handy dandy mini-tart shaper to make quick work of it. (I purchased it from Pampered Chef, and I mention it here because I like it; they did not compensate me in any way to mention it.) He needed to dip it in flour each time so that it didn't stick to the soft dough. 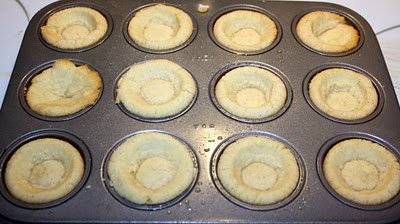 When they came out of the oven, they had filled in quite a bit, so he used the tart shaper to gently push down the middles a bit. Would this have caused what came next? I truly don't think so. 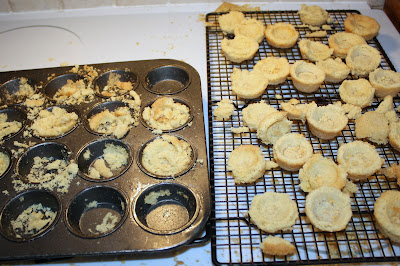 These buggers would not come out of the pan. He tried right when they came out of the oven, as directed, and they fell apart. Then I stepped in. We tried waiting a few minutes, and they stuck to the pan. When we did manage to get them out of the pan, they still fell apart. We tried waiting until they were completely cool. They completely stuck to the pan, so we tried running a knife around the outside of each cup. That caused them to crumble right in the pan.

I'm not printing the recipe here because I don't want anyone to experience the same frustration he did. If, for some reason, you want to try it, you can find it here, on the Taste of Home website. (I noticed that the two most recent reviewers had the same trouble he did.) If you come up with better results that he did, please let me know and give us a clue as to what went wrong. I will post my son's version of the pudding because he enjoyed that:

Danny's Eggnog Pudding
Adapted from a Taste of Home recipe

In a small saucepan, combine the pudding mix, eggnog and milk. Cook and stir until mixture comes to a boil. Remove from the heat; stir in extract. Transfer to a small bowl. Put a piece of waxed paper right on top of the pudding so that it doesn't form a skin. Refrigerate until chilled.
Posted by Tracy at December 15, 2010

What a bummer. This reminds me of the Epic Cupcake Fail of 2010, which had me scraping our tins directly into the compost.

That one looked good though...

I made a similar recipe with chocolate last year and it was a PITA trying to get them all out of the pans in one piece (and I'm sure they all didn't come out in one piece). I have two different mini muffin pans that look similar but one gave them up easier than the other. One of the pans is exactly like your pan so maybe it is just the pan.

Paula, it's a good thought but I don't think it was the pans because I used two different pans. The bottom picture shows the one with wider, shorter cups. In the picture above it, there's another pan with taller, narrower cups -- and that one is nonstick! So frustrating.

I hate when this happens...and for me it always seems to happen to the recipes I am most excited about :-( I hope your son has better luck with his next recipe. I think it is so great that he is making cookies!

I absolutely love eggnog. The pudding your son made sounds good! Sorry the cookies were so much trouble, though... that's not good at all.

Hi. I came across your blog after I found this recipe in a cookbook and wanted to find any tips on the procedure & subs for the rum extract. I would like to tell you that I tried the cookie recipe with very good results. Here is what I did that seemed to help: I lightly greased the mini muffin cups with Crisco (mine are stick-resistant.) I used a similar tool to press the cookie dough into the cups. Now, here is what I think made the difference between success and failure--I baked them for 10 minutes, took them out of the oven and pressed them again, twisting each cookie cup a little in the process. Then I popped them back into the oven for 5 minutes more. I was able to remove them from the muffin pan immediately. I didn't get to use the pudding recipe because eggnog is not yet available, but I found another recipe that was ok. Will try this again in a few weeks when I can get the eggnog.