Our family had our traditional day of gingerbread house decorating with another family, whose creations get more and more beautiful every year. Their creation this year was my favorite -- a gingerbread farm. Here's what they created, along with some of their techniques. 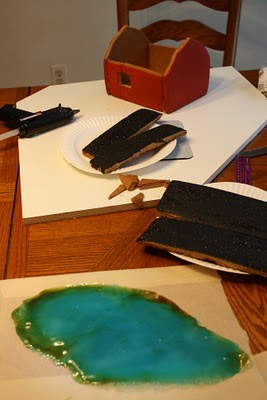 When we arrived, they had several elements ready to go.

Wegmans sells a package of unadorned, pre-baked gingerbread house pieces for about $5, and that's what they used. They trimmed the front pieces and cut the roof pieces in half lengthwise to make a Gambrel roof. They cut holes in the side pieces for windows. I wasn't there for this step, but my guess is that they used a Dremel tool to do the cutting.

They stained the barn pieces red by painting them with food coloring. They made some sort of a thick black concoction for the roof.

They used a glue gun to put the barn pieces together. That wouldn't fly in a gingerbread competition, but this wasn't a competition. It was more dependable and less messy to use than royal icing.

They also had made a pond by putting hard candies on parchment and baking them until they were melted. Then they shaped the pond to their desired shape. 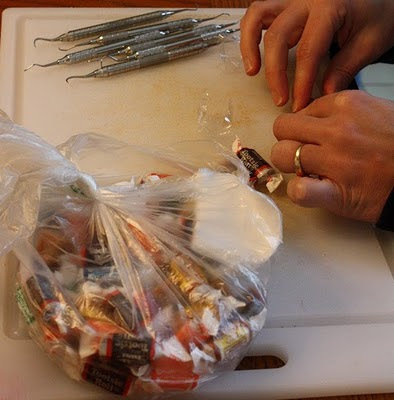 The husband of the family and their 13-year-old daughter have become sophisticated in their molding of various figures, and their tools have followed suit. They used retired dental tools (scored from a family member who is a dental hygienist) to shape their figures. 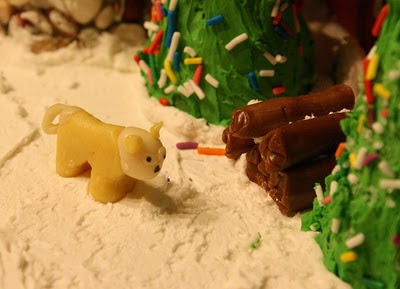 Cat, along with some stacked Tootsie Roll logs. 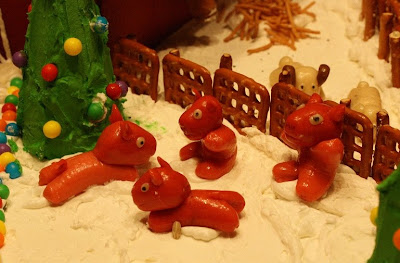 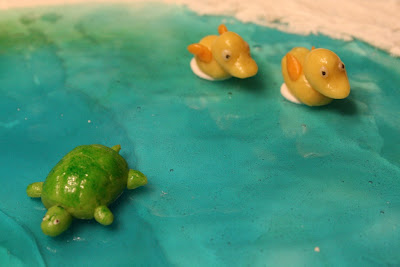 Ducks and turtle on the pond. 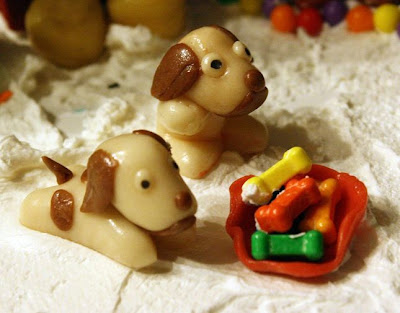 And (my favorite), dogs. 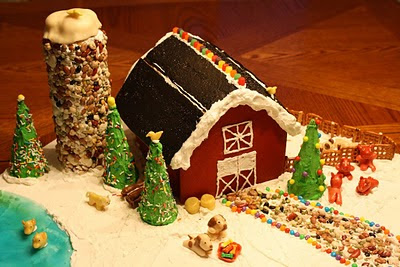 Here's the barn, almost done (every time I thought their masterpiece was complete, they added embellishments). The silo was made adhering a mixture of dried beans to an empty food container with royal icing. Again, this wouldn't fly in a gingerbread competition but it looked great. The path leading up to the barn also made use of the dried beans, and was lined with colorful small candies.

The trees were made by covering sugar cones with green frosting. Each had a Tootsie Roll bird on top.

Note the use of white space. Because they didn't feel the need to cover every bit of snow, you can appreciate the details. 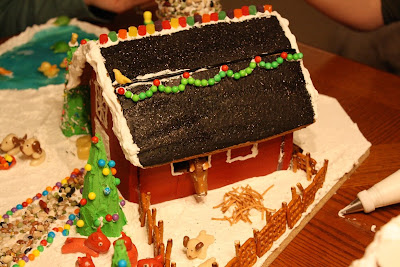 Here's a shot the finished barn from the side. Note the garland and the bird on the roof. Do you see the horse looking out the window and his hay (Chinese noodles) on the ground?

Want to see some of this talented family's past creations? Here are some:
The Zoo from 2009 (Some photos are missing. I will try to remedy that.)
The Pretty House from 2007
Another Pretty House, from 2006
Posted by Tracy at December 16, 2010

Wow! That gingerbread house looks fantastic. Very impressive use of tootsie rolls. Thanks for sharing your friend's creation. What a fun tradition for your family! We recently shared a blog post on the tradition of gingerbread around the world that you might enjoy (http://www.wegmans.com/blog/2010/12/gingerbread-2/)

Tracy, this must have been a fun for everyone afternoon. The finished barn is amazingly creative. Have a wonderful day. Blessings...Mary