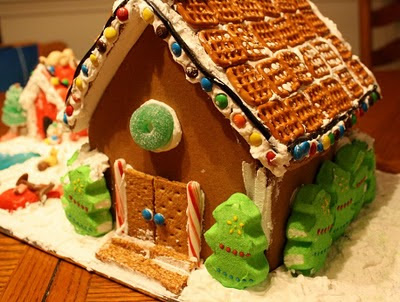 The year 2010 will be the year remembered as the year Mom lost her sense of humor about our gingerbread house.

I arrived at our friends' house for our afternoon of gingerbread with our house assembled, royal icing ready to go (foolproof recipe here) and edibles for decorating the house purchased. As our friends peacefully created their beautiful farm (previous post), my teenage sons started their annual ritual of creating stabbed snowmen, snowmen with their heads blown off, and the like. In past years, I was amused. I even joined in. But this year I had had enough (and my husband didn't like the sick humor in the first place). I put my foot down.

In retrospect, I should have told them in advance that it was time to think of another way to express their creativity. I wouldn't have minded a funny theme, but in my book, violence isn't part of the Christmas spirit.

My 15-year-old son, who avoids unpleasant situations and especially irritated Moms, resigned himself to putting waffle-shaped pretzels on the roof and arranging Peeps Christmas trees around the house. He spent about a half hour on the house and wandered off. My 13-year-old son would not be dissuaded, and created a few things that he found amusing. I gave in and let him put it on the board, but Mom gets her way in the end. I'm not showing his stuff on this blog post.

So let's move on. Did you spy a doghouse in the background? Why yes, my friends, it was Snoopy's doghouse. It was a piece of unfinished business I had related to gingerbread. 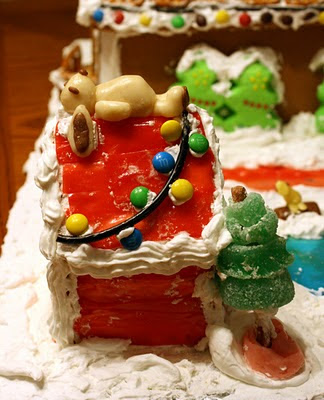 A few years ago, we tried to create a Snoopy gingerbread house, and failed. An epic fail, the boys would say. I chronicled it here. But I always thought it was a cute idea, and wished we had pulled it off.

Instead of having a big Snoopy house, I thought we could have a little doghouse behind the regular size gingerbread house. (That makes our big house Charlie Brown's house. In my memory, his house is nondescript so I figured we had creative license.) I made Snoopy's house from graham crackers and sculpted Snoopy out of regular and vanilla Tootsie Rolls. His Christmas lights were black licorice strings and mini M&Ms. 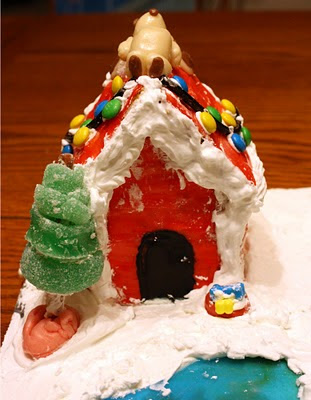 To make the house red, my husband adhered red Fruit by the Foot to the crackers with royal icing. It was a messy process and as a result he got royal icing fingerprints all over the place. (I tell myself it's snow.) A better idea may have been painting the crackers with red food color, the way our friends did for their barn in the previous post. The black for Snoopy's door was a concoction our friends had made for their barn roof. My husband fashioned a Charlie Brown Christmas tree, complete with a pink blanket around the bottom, and put it next to the house. (Although come to think of it, wasn't Linus' blanket blue?) 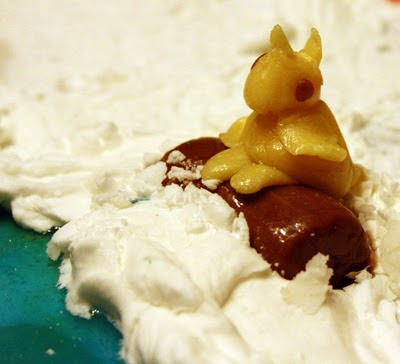 I made Woodstock out of a lemon Tootsie Roll. It's hard to make Tootsie Rolls look like feathers. He looks like he has horns on his head instead of feathers. He's sitting on a Tootsie Roll log next to the pond in front of Snoopy's house. The pond was actually a reject from our friends' barn, made from melted blue hard candies. 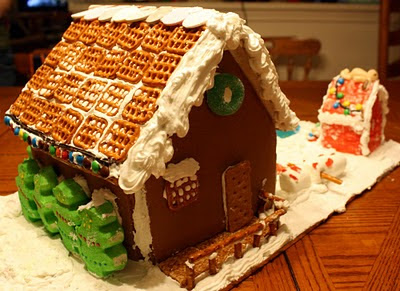 My husband made a cute back porch of various pretzels.

Pay no mind to the snowman with red splotches on the ground next to it.
Posted by Tracy at December 17, 2010

Haha! You had me laughing because I know exactly what you are dealing with. Boys, gotta love 'em! We stopped making our gingerbread house a few years ago and I started borrowing the little girls across the street then the NFL moved them away so this is the first year we are sans gingerbread cottage. Yours is adorable. Merry Christmas!!!

I love your house! I didn't even get to gingerbread this year. Maybe next week! Snoopy's house was so cute!

Wow, that's an impressive house!
I've never made a gingerbread house, but I'd like to think that stabbed snowmen would be out of the picture.