Wegmans Ultimate Chocolate Cake (and my teeny tiny role in it) 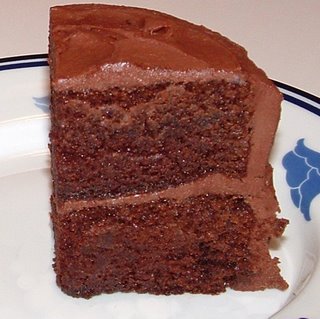 More than a year ago, I got a call from Mary Ellen Burris, senior vice president of consumer affairs at Wegmans Food Markets. (I enjoyed meeting Mary Ellen at the Pillsbury Bake-off contest in 2004.) She asked if I would be interested in being a judge for an internal chocolate cake contest at Wegmans – and Danny Wegman (Wegmans CEO) and Gale Gand would be among the judges.

Suffice it to say I was thrilled at the invitation.

Once the excitement of the invitation wore off, however, my nerves set in. I had no idea about what the judging process would be like. And since I’ve almost never had a chocolate cake I didn’t like, I was worried I wouldn’t have much to contribute to the judging – especially in a room with the likes of Gale Gand and Danny Wegman.

As it turned out, I didn’t have reason to be nervous. Danny, Gale and the other Wegmans executives were all very pleasant. And I found, to my surprise, that there were significant differences among the chocolate cakes.

This was more than a year ago and I didn’t take notes, but I’ll describe the judging to the best of my recollection. The judging happened in two groups of eight cakes, each of which had won a regional competition. We were given a sheet for rating each cake and we quietly tasted the cakes and recorded our marks.

During the judging, I was seated between Joe McKenna, Wegmans executive chef, and Jack DePeters, a VP. I watched Joe McKenna out of the corner of my eye to see how he approached the task. He slowly and methodically took a bite of the cake, then a bite of the frosting, then a bite of cake and frosting together, and then marked his scores. I had Googled Joe McKenna before the contest, so I knew Joe knew his stuff. He used to teach at the Culinary Institute of America and has won many culinary competitions and awards. I decide to imitate his method, tasting the cake and frosting separately, then together. This in itself was interesting, because there were instances where I wasn’t wild about one of the elements, but thought the combination of the two were very good.

After tasting a number of cakes, I noticed that the majority of the cakes had a good moist texture, but few had a pronounced chocolate flavor. Finally, my curiosity got the best of me (not to mention that I’m exquisitely uncomfortable not talking for a long period of time). I said to Joe, “is it my imagination, or are most of these cakes not very chocolatey?” He explained that working with chocolate is tricky because too much sweetness mutes the chocolate flavor.

Some of the cakes had different flavors in them. One had raspberry, and my take was that a chocolate-raspberry cake was a different animal than “the ultimate chocolate cake.” Several had a pronounced coffee flavor. Adding coffee wasn’t a bad idea, because coffee can intensify the flavor of chocolate, but some tasted like more like mocha than like chocolate. Some cakes had a very dark, almost black color. Gale explained that the color came from the kind of cocoa powder that was used. Those cakes would be great for Halloween but struck me as somewhat unappealing.

We took a break after the first eight cakes, and Wegmans served us lunch – sandwiches and the like. I found myself, however, craving protein. All I wanted was a chicken breast with no carbs whatsoever. This is a rare state for me, as I love sweets, pastas, and so on. But the combination of the caffeine and sugar in the chocolate cakes gave me a case of the jitters.

About midway through the judging, Jack, who sat to the left of me, grew tired of silently tabulating our scores, and started chatting with me. We compared notes on the cakes (after recording our scores), but we mostly talked about such things as boating on the Great Lakes. I remember a lot of chuckling, as he had a quick wit. Joe, on the other side of me, kept up his serious, silent, methodical process of tasting first the cake, then the frosting, then both. His seriousness was understandable, as he’d have a large role in bringing the cake to market.

During the second group of cakes, I found I had a stronger opinion about them. A couple stood out as being exceptionally chocolatey and moist, and others I didn’t like at all. I don’t know whether the cakes in that group were that much better or worse, or if I had developed a stronger opinion of what I did and didn’t like. Each time I wrote down my scores, I’d jot down little notes about each cake, assuming that we’d discuss the scores at the end to come to an agreement on the winner.

Once the tasting was done, we handed in our score sheets and Joe told us we could take a break while he tallied the scores. After the break, he told us which cake won. I was surprised, as I thought there would be some discussion, but evidently the winners were pretty clear cut.

The awards ceremony was held in an atrium in the Wegmans headquarters. As the contestants and Wegmans employees gathered, I got a chance to chat with Gale Gand. She was friendly and approachable – she struck me as someone I’d enjoy palling around with. We chatted a little bit about the Pillsbury Bake-off contest, and I grilled her about her show (“Sweet Dreams” on the TV Food Network). I learned that they film all the episodes in a few days, one right after the other. She said it’s a melancholy feeling as they are doing the last episode, because burly union guys hover around, ready to break down the set.

The ceremony was fun, because we got to see the people behind the winning cakes. The woman who won received a class at the Culinary Institute of America – I was envious!

I went home with an autographed Gale Gand cookbook, which was a gift from Wegmans, as well as (believe it or not) some chocolate cake. During the judging, I had mentioned that my sons were desperately interested in the contest, so one of the Wegmans employees set aside a small piece of each cake for me. He put them all together to form a cake out of 16 different pieces. It was very thoughtful -- I appreciated it.

You would think that after tasting 16 chocolate cakes that I’d swear off chocolate cake for a long while. By the end of the judging, I thought I wouldn't have any for awhile. But I actually had some the next day. I was curious to taste the winner to confirm that it was really “the ultimate chocolate cake.” I honestly believed the group made a very good choice. And both sons enjoyed tasting the other cakes and telling me their critiques.

Turn the calendar to more than a year later ... a week or so ago, I went to Wegmans, and there was a display of “The Ultimate Chocolate Cake.” At last! I bought the mini cake – put the tips of your fingers and thumbs together to make a circle, and it’s roughly that size – for $7. I cut it into quarters.

The cake was very moist and intensely chocolaty. A quarter of that little cake completely satiated my need for chocolate – for a day, that is. I suspect that the fudgy frosting is even more chocolaty (less sweet) than the frosting on the original winning cake. In any case, I’m pleased to say that I had a teeny tiny role in that cake!

If you want to read about the contest, here’s a link to the Wegmans press release.

Tracy, the cake was offered for samples at our Wegmans today. It was excellent...I agree that it was like eating a candy bar. Of course the kids wolfed down their teeny bites and loved it too.

I enjoyed the inside scoop about the contest. You do so many fun things these days :)

By the way, I am loving your blog. I check it just about every day, and I think your writing and insights are great!

Karen,
Thanks for reading, and thanks for the compliment on the blog!
I may have to run to Wegmans for cake samples today! :-)
Tracy

I bought a little one ($7 - yikes!) last weekend. It was good. A little fudgy (like the center of a brownie) for my taste - I'd prefer a little more fluffy or cake-y consistency, but that could have just been sample variation.

Hiya Rottenchester,
I was a tad startled at the cake prices too.
I wouldn't say the cake I had was like a brownie. It was definitely moist, but still cake-like.
Hmmm ... maybe I have to go buy another one to check on it...

I am a dark chocoholic and have eaten many chocolate cakes. This is the best cake I have ever had. So glad Wegmans moved into the neighborhood.

I am going to try the Ultimate Chocolate Cake again. My husband and I were actually really disappointed. We bought ours from the Fairfax, VA Wegmans (the mini version for $7 and it was very dry and the flavor wasn't that great as I can recall). I will go and try it again and comment once I have it again. We did let it sit out at room tempature for an hour.

I have NEVER liked chocolate cakes. That all changed when i tried the Wegmans ultmate chocolate cake, it is AMAZING though yes its overpriced.

Hi there
i lived in Rochester for a few months back in 2007 (now back in Sydney Australia) and I just fell in love with the Wegmans brownies (you could say I was obsessed). I would love to be able to cook these, but don't know where to find the recipe.

ps. I loved Rochester and still have a great friend there.

Your help would be hugely appreciated.
Cheerio
Harai Clark

Harai,
I, too, love Wegmans brownies. I can't say I have a recipe that's just like them. I'm glad you liked Rochester. I'd so love to visit "Down Under!"
Sorry I can't be of help.
Tracy

I really need to make it upstate so I can visit a Wegman's and try their chocolate cake. We were in the Hudson River Valley this summer, but that's as close as I got. But I've been reading about that great cake and am wondering which of my many chocolate cake recipes is closest to the Wegman's one.

Anna, it's very dense and has a thick chocolate frosting. It is less sweet/more chocolatey than most cakes I've had.