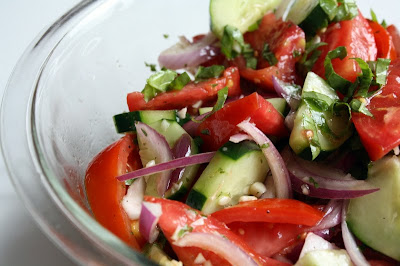 Recipe says this feeds six -- I suppose that's if you don't have a lot of sides.
Posted by Tracy at September 15, 2010

there is nothing like a cold crunchy salad on a warm day im in arizona so it is still hot here 106 today!

This salad looks great. I remember that mac and cheese. I have to make that for Eric soon.

This is a regular at our house in the summer but I never thought to put a little sugar in it. I bet that just makes it so much more flavorful.

I'm definitely copying this recipe! I wish I could keep my basil plants alive, though. Also, please update your blog!!

No, really. I'm not kidding.

I stumbled upon your blog while searching for an appropriate photo to use in my Superfoods recipe book. I have a very similar recipe to your cucumber salad, and while I don't have the equipment or great photography skills, I have to borrow or buy most of the photos I have used so far.
In the interest of saving time and money, I was wondering if you would allow me to use your photo of the cucumber salad with your photo credits.
The book will be sold online through my site and a couple of other sites.
Thank you so much!
PS I couldnt get your email address to work.

Cat, you didn't leave any contact info so I'm not sure how to get back to you. My email address does work if you know usual email formatting. The word "at" is replaced by @ with no spaces, and the word "dot" is replaced with the period key. Again, no spaces.

Just a heads up, the cucumber salad you get at the actual restaurant (in both Rochester and Syracuse) doesn't have any onions in it.

I believe you! This is the way it appeared in their cookbook.