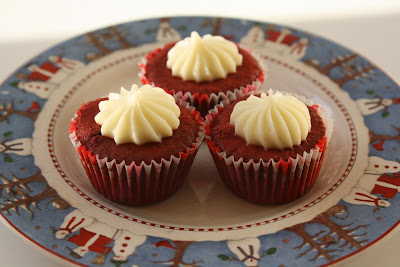 Did you catch the mini cupcake episode of "Throwdown With Bobby Flay?" (I'm hooked on that show -- I think I've seen every episode since it began.) Those mini cupcakes looked so cute that I wanted to try making them the first chance I got. I made them for a dinner party that happened just before Valentine's Day.

When I checked out Bobby Flay's mini cupcake recipe, it looked like a lot of bother. Plus, I had people coming and the house needed cleaning! I turned to the recipe that served me well with the Big Top Cupcake. I figured if it worked well for a big cupcake, it would also work well small. And it did, for the most part.

The only problem I had was that I have three different mini muffin pans (I pick them up when I see them at a garage sale or thrift shop). Each pan is a little different. 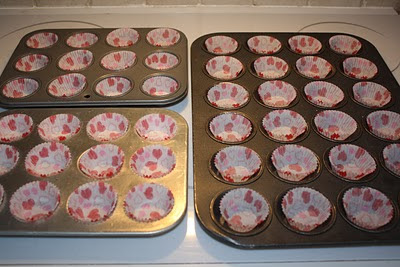 The one on the top left was the deepest, and the liner nestled down in the cup. The pan on the right had the widest cups, so there was wiggle room around the liners. The one on the bottom left was shallow, so the liners extended above the top of the pan. They baked at different rates, so I had to take each pan out of the oven at different times. Which came out best?

The deepest pan produced cakes that were tall and skinny. The pan with the widest cups produced squat cupcakes, and the liners separated from the cupcakes in places. The shallow pan, in which the liners extended above the pan, produced cupcakes that were just the right shape and size.

Bear in mind that the pans you see above accommodated half of the dough. I didn't want to make 96 mini cupcakes, so I made the other half of the batch into a dozen regular cupcakes, which we enjoyed on Valentines Day.

I frosted the cupcakes with a lightened cream cheese icing. It's an amalgamation of a recipe from  The Best Light Recipe (my current favorite cookbook) and another I saw in Cooking Light. All the guys in the family were begging the lick the bowl -- shhhh, we won't tell them it's light.

If you're following Weight Watchers, each mini cupcake with a little dollop of cream cheese icing is 2 Points Plus. 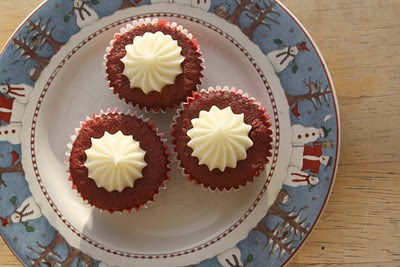 Place a rack in the center of the oven and preheat the oven to 350 degrees. Line cupcake pans with paper liners.

Place the cake mix, milk, melted butter, eggs and vanilla in a large mixing bowl. Blend with an electric mixer on low speed for 1 minute. Stop the machine and scrape down the sides of the bowl with a rubber spatula. Increase the mixer speed to medium and beat 2 minutes more, scraping the sides down again if needed. The batter should look well blended.

Scoop the batter into the liners. They should be about 3/4 full. (If you happen to have the Pampered Chef scoops, the smallest one is perfect for mini cupcakes). Bake the cakes until they spring back when lightly pressed with your finger, about 10-12 minutes for mini cupcakes. (If you are baking regular size cupcakes, start checking them at 18 minutes.)

Remove the pans from the oven and place them on wire racks to cool for 10 minutes. Let cool completely before frosting.

Combine cream cheese and vanilla in a stand mixer bowl. Mix on stir until just combined. Add sugar and mix until combined but still lumpy. Finish stirring with a rubber spatula. (If you mix too much with the stand mixer, it will become too soupy).

I frosted with pastry bag and large star tip (Wilton 6B).

For tons and tons of other sweets ideas, check out this post, from Sweet as Sugar Cookies.
Posted by Tracy at February 20, 2011 6 comments 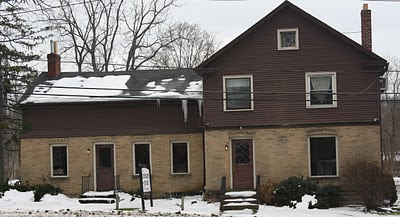 There's something about cold, snowy nights that make even the most hardy Rochesterians stay close to home. That's the primary reason a group of friends from the eastern suburbs chose the Humphrey House (on Route 441 in Penfield) to meet for dinner and drinks. It turned out to be a good -- but not perfect -- choice.

The Humphrey House has been a Penfield institution for as long as I can remember. My husband and I went there years ago (in the 1990s?) and I remember it having a dark atmosphere, heavy menu and gray-haired clientele. Since then, the restaurant has gone through some ownership changes. In the process, the decor was brightened and updated. The menu also changed to lighter, more casual fare, including wood-fired pizzas.

We went on a Friday at 6:30, just in time to take advantage of the buy one/get one happy hour for beer, wine and well drinks. We spent awhile visiting at the bar, and by the time we were seated for dinner, we all were in a great mood.

The dining room is quiet and cozy, with a fireplace, lots of exposed wood and interesting antiques. Most of the tables were couples or foursomes, all adults in their 40s and up, so our table of eight women was by far the loudest in the place. It made me a bit uncomfortable. (Although there's a kids menu, I can't imagine taking kids there unless they are exceptionally quiet and well behaved.)

The service was a bit slow. When our waitress came to take our order, we asked her to return in a few minutes because everyone hadn't decided. We waited several minutes and finally had to flag her down. But once we got our food, everyone was happy. Several people ordered wood-fired pizzas and liked their choices. I had a special shrimp and pasta dish, which a few others ordered. Often when I order pasta at a restaurant, the portions are so huge that I feel like I could roll out of the place. This dish was just the right size that I was satisfied but not stuffed ... and I ate every delicious bite. We agreed we'd order it again.

After dinner, a few of us were intrigued by the antiques throughout the dining room and bar and went to inspect them close up. It turns out that the house used to be owned by Doc Humphrey, and the antiques were memorabilia from him. It was fun checking them out.

By the time we left at just past nine, the dining room was empty (although the bar wasn't). I've come to notice that this isn't unusual for Penfield restaurants. I'm guessing the people in their 20s and 30s, who go out and stay out later, tend to head to the city. That could be a clue as to why so many Penfield restaurants seem to come and go. I do hope the Humphrey House sticks around for awhile. Because of the quiet atmosphere, it's probably not the place I'd choose for another ladies' night out, but I'd certainly return for a quiet dinner with my husband.