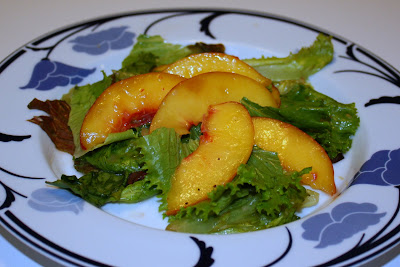 This simple salad highlights the sweet, juicy nectarines that are so wonderful this time of year. I've made a few variations -- I've made it with peaches, added pecans, added goat cheese, added grilled chicken -- and it's great every time.

It calls for walnut oil, which is an ingredient that always elicits a guffaw from my husband, Tom. Here's why.

Shortly after my husband and I were married (almost 20 years ago), we invited another couple, Karin and Steve, over for dinner. They were the first "couple" friends we had made together, and we enjoyed spending time with them. I admired Karin's cooking, which seemed so much more sophisticated than mine. She never used things like canned cream-of-something soup or bottled salad dressings, both of which were integral items in my culinary repertoire. And she very rarely followed a recipe exactly -- a practice that was foreign to me.

For my menu, I turned to a wedding gift, The New Basics Cookbook -- a cookbook from the Silver Palate series. (I still use it regularly.) I prepared an autumn-themed dinner, and the salad was Pear and Blue Cheese Salad, which was served with a walnut oil vinaigrette.

I sent Tom to Wegmans with a long list of ingredients, and he returned home with most of the ingredients, but said that he asked a few different Wegmans employees where the walnut oil was, and they all  looked at him like he had two heads. After lots of searching, he concluded that walnut oil was nowhere to be found.

At that point, I was in no condition to change my menu and I, unlike Karin, followed each recipe to a tee. So I sent my poor new husband on a wild goose chase all over the Rochester area to find walnut oil. Hours later, he returned home with the prized walnut oil. He had found it at a gourmet food shop in Pittsford, Cook's World (it's still in the same location, and looks pretty much the same as it did then). I was shocked that the oil cost $12!

So we served the salad and Tom, of course, regaled them with the story of the hunt for the walnut oil. Karin laughed and said, "you could have just substituted olive oil." That truly had never occurred to me! Luckily, Karin and Steve loved the salad -- so much so that they served it at Christmastime that year (although I don't know whether she used walnut oil). Tom, on the other hand, took a few tentative bites and said, "I'm sorry, but these flavors just don't go together." To be honest, I was somewhere in the middle -- didn't love it, didn't hate it.

Almost 20 years later, Wegmans now carries walnut oil, so I use it in this recipe, with fond memories of the times we had with Karin and Steve.

Combine all vinaigrette ingredients, stirring with a whisk. Store in refrigerator for up to 1 week. Yield: 2/3 cup (serving size: about 1 tablespoon)

Place greens and nectarines in a large bowl. Drizzle sparingly with Walnut Oil Vinaigrette; toss gently to coat. You will not need very much vinaigrette.

Variations I've tried:
- use peaches instead of nectarines
- Add nuts, goat cheese and/or
Posted by Tracy at August 19, 2011 4 comments