Gingerbread Houses at the Eastman House 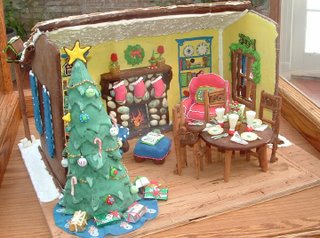 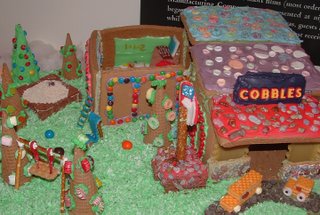 The houses came from various parts of the community -- individuals, families, Scout troops, and various businesses all contribute. The boys were both interested in this year's exhibit, because both of their schools had a house on display. The one at right is from a class in my younger son's school. 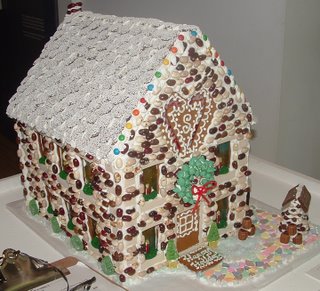 This year, the quality of the gingerbread houses was very good. In the past, some of the school and Scout entries seemed a little slapdash, but this year even those showed thought and skill. My favorite house was the one at right. A photo doesn't really do it justice, because all the glasses had a stained glass effect, with a candle in every window. 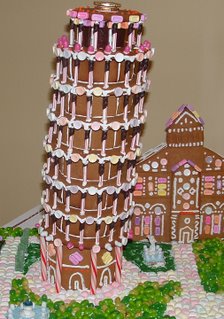 I didn't keep track of who created each piece (perhaps I should have if I was going to put them on the blog), but I would think that this Leaning Tower of Pisa would have been especially challenging to construct. 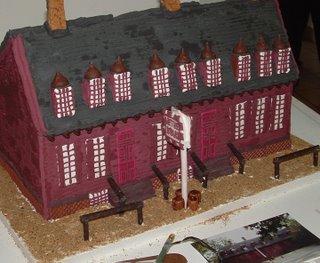 This house was a replica of a historic building in a nearby town. It struck me as a good likeness. Based on my experience with frosting, I'm guessing it was a real challenge to get the colors of the icing just right. 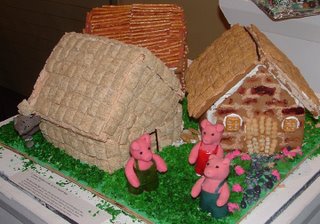 The "Three Little Pigs" house was simple in construction, but clever in terms of concept. The pigs were especially well executed. If you look closely at the far left, you can see the Big Bad Wolf eating a piece of one of the houses! 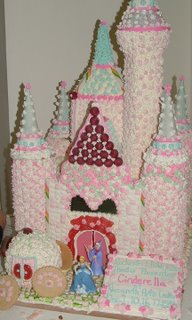 This house was created to advertise a production of "Cinderella." It was impressive.

They were all impressive, that is, until we watched the National Gingerbread Championship on the TV Food Network. Those were absolutely phenomenal. We were especially impressed with three teen sisters' depiction of a town in the Harry Potter books. In the adult division, people spend hundreds of hours constructing entire villages in intricate detail. All this for a $1,000 grand prize -- they are nuts, if you ask me! I find it interesting that there are so many subgroups within the food contesting world -- areas like chili, pies, and gingerbread have die-hard competitors that often don't compete outside their specific realm.

Our family will give a gingerbread house a few hours' worth of effort tomorrow. We're going to another family's house to decorate our houses. We've been doing this with the same family for years (actually, there was a third family that started out hosting the gingerbread gathering, but they sadly moved out of the area). In the old days, we used to bake our own gingerbread. Now, we buy the pieces ready-made from Wegmans. At a price of $4.99, it's worth avoiding the hassle of baking the gingerbread. We're leaning toward a Snoopy doghouse theme, but we'll see if it actually goes that way. I'll post a photo of our results -- but don't expect anything like the creations you see here!
Posted by Tracy at December 08, 2006

Email ThisBlogThis!Share to TwitterShare to FacebookShare to Pinterest
Labels: Gingerbread, Rochester in general

The ready made pieces are great.
Thanks for the tour of Eastman show. Isn't the house beautiful at Christmas?