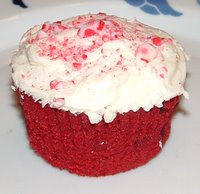 One of our family's traditions is to celebrate the half-birthdays of our sons. I started this tradition because my older son's birthday is right after Christmas, and it seemed like a long time for him to go without having a special day. It's just a little celebration within our family. The birthday kid picks out dinner. For dessert, I usually make one layer of a cake, cut it in half, and frost it to look like half of a two-layer cake. We light one candle and sing "Happy half-birthday." The child gets one moderately priced gift.

For my younger son's half-birthday celebration, which we celebrated today, I suggested making cupcakes instead of the traditional half of a cake. We're going to a dinner tomorrow, and I said I'd bring dessert. I figured cupcakes would be something fun to bring for the kids.

My son looked through the cupcake recipes I had collected online, and chose Red Velvet Cupcakes with White Chocolate Peppermint Cream Cheese Frosting, which is from a Cake Mix Doctor book. I thought it was a great choice, particularly for the season. 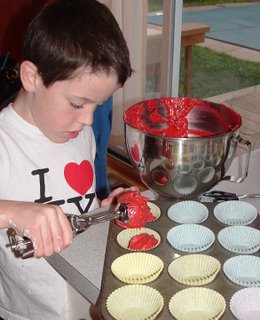 We made the cupcakes together, and I frosted them. Each of us decorated 12 of the cupcakes (half of the batch). My son decided to stick the straight part of a candy cane into each of his, because he wanted to make "the North Pole." I decided to sprinkle mine with crushed candy canes.

I'm pretty sure Red Velvet Cake is traditional in the South, but I've never had it before. The red color, produced by a whole bottle of red food coloring, is a little strange. (I actually think the original recipe had something to do with a chemical reaction between baking soda and one type of cocoa powder, but most current recipes seem to use food coloring.) The chocolate taste was mild, even with the addition of mini chocolate chips. I prefer a more pronounced chocolate flavor, but perhaps that's just how red velvet cake tastes. I liked the minty frosting, but regretted adding the crushed candy canes. I found the crunch distracting.

Oh, and Danny's choice for dinner was ... Kid Cuisines. Yep, he has a mom that will make him just about anything, and he chooses a frozen dinner. Go figure. Tom decided to have a frozen pizza and I made myself quesadillas (I'll post the recipe another day). Anyway, here's the cupcake recipe: 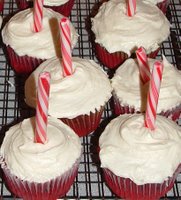 • Place a rack in the center of the oven and preheat the oven to 350°F. Line 24 cupcake cups with paper liners. Set the pans aside.
• Place the cake mix, pudding mix, sour cream, water, oil, food coloring and eggs in a large mixing bowl. Blend with an electric mixer on low speed for 30 seconds. Stop the machine and scrape down the sides of the bowl with a rubber spatula.
• Increase the mixer speed to medium and beat two minutes more, scraping down the sides again if needed. The batter should look thick and well combined. Fold in the chocolate chips.
• Spoon batter into each lined cupcake cup, filling it three quarters of the way full. Place the pans in the oven.
• Bake the cupcakes until they spring back when lightly pressed with your finger, 18 to 20 minutes. Remove the pans from the oven and place them on wire racks to cool for 5 minutes. Run a dinner knife around the edges of the cupcake liners, lift the cupcakes up from the bottoms of the cups using the end of the knife, and pick them out of the cups carefully with your fingertips. Place them on a wire rack to cool for 15 minutes before frosting.
• Meanwhile, prepare the White Chocolate Peppermint Cream Cheese Frosting. When finished, place a heaping tablespoon of frosting on each cupcake and swirl to spread with a short metal spatula or a spoon, taking care to cover the tops completely.
• Place these cupcakes, uncovered or in a cake server, in the refrigerator until the frosting sets, 20 minutes.

• Place the white chocolate in a small glass bowl in the microwave oven on high power for one minute. Remove the bowl from the oven and stir with a wooden spoon or rubber spatula until it is smooth. Set the chocolate aside to cool.
• Place the cream cheese and butter in a large mixing bowl. Beat with an electric mixer on low speed until well combined, 30 seconds. Stop the machine. Add the melted white chocolate and blend on low speed until just combined, 30 seconds.
• Add the peppermint extract and two cups of the confectioners' sugar and blend on low until the sugar is incorporated, 30 seconds more. Increase the mixer speed to medium and beat until the frosting is fluffy, one minute more, adding up to ½ cup more sugar if needed to make a spreadable consistency.
• Fold in up to ½ cup crushed peppermint candy for a crunchy and creamy frosting, if desired.
Posted by Tracy at December 02, 2006

Thanks for the pictures and post, Tracy! I love the idea of a half-birthday celebration!
Re the muted chocolate flavor: I think German chocolate cake is a little muted in general. You could try with a deep chocolate the next time.

I was actually thinking about starting the half-birthday tradition. My son's birthday is in early January and the weather makes planning parties very difficult.

I like doing the half-birthday celebration. The kids love it because they get another day to be special. I'm just careful not to let it get overblown, like so many things seem to be. The only trouble is remembering!

The cupcakes grew on me ... I ended up deciding they were really good.