Exciting win for a contest buddy!

I'm going crazy trying to get my kids ready to go back to school, plus preparing for a couple of trips. That's why I'm doing these goofy blog posts instead of writing about actual recipes.

But I wanted to give a shout out to my cooking contest buddy, Teri, who won herself a trip to NYC to cook with Bobby Flay! The contest was called Flayvors of Washington -- get it? Anyway, Teri is the type of person who will be totally poised as she's cooking with Bobby, so good for her. Here's a link to her Chicken Curry Burger recipe. I'll have to try them and see how they compare to Oprah's favorite turkey burgers.

Another buddy, Edwina, won a bunch of goodies for a Crab and Sweet Corn Tart that also sounds delicious. 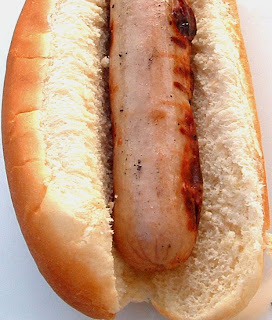 For many people, nothing tastes like summer than a hot dog. In Rochester, we have the choice of two different kinds -- red and white. In fact, Rochesterians usually drop the "dog" from the name and call them "red hots" and "white hots."

Red hots are the hot dogs everyone grew up with. White hots are neither cured nor smoked, which gives them their distinctive color. My personal opinion is that white hots have a milder flavor than red hots. They have been compared to bratwurst, but as a person who has spent a lot of time in Wisconsin, I will tell you that they are nothing like brats! (To be honest, I much prefer a brat.)

Zwiegle's is generally the hot dog brand of choice in these parts, but the Wegmans store brand is also very good.

If you really want to eat a white hot like a Rochesterian, you'll get it topped with a ground beef-based hot sauce that's another local specialty. I've tried to make the sauce a couple of times but I've never achieved a version I'm happy with. When I do, I'll be sure to post it.

So if you're ever in the Rochester area, go to one of the many hot dog joints in the area, and order a white hot with hot sauce. You'll get a taste of Rochester that you can't find anywhere else.
Posted by Tracy at August 17, 2008 3 comments

In search of an ultimate zucchini bread... 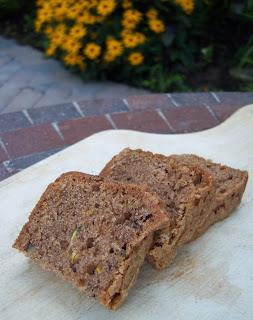 I have a few go-to recipes for banana bread, but I don't have zucchini bread recipes I really love. Since I'm overloaded with zucchini from my CSA bag, now is the time to find my ultimate recipe. I'd like it to be dense, moist, and nutty. Healthy would be good, too.

This recipe was pretty good. It wasn't quite what I was looking for, though. I'd like something that was moister and denser, and perhaps had less sugar and oil. I kept one loaf and gave one to a friend, who raved about it. My older son liked it so much, that I had to snatch a few pieces for photographing! Oh, and Charlie liked it too. 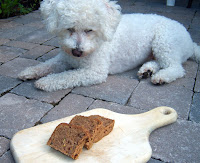 In a large bowl, beat eggs until light and frothy. Mix in oil and sugar. Stir in zucchini and vanilla.

Combine flours, cinnamon, soda, baking powder, salt and nuts; stir into the egg mixture. Divide batter into prepared pans. If desired, sprinkle with turbinado sugar to give it a crunchy topping.

If you want an entertaining read, take a mosey over to Alosha's Kitchen to read about her battle with Cook's Country (same folks as America's Test Kitchen and Cooks Illustrated). Apparently she got her hand slapped for running one of their recipes on her blog, and indicating that she made changes to the recipe (I'm not sure which was the bigger offense).

1. A list of ingredients cannot be copyrighted. And if you change an ingredient, it's a different list.

Slowly, and in SMALL batches, puree the soup at a high speed in the blender. Do this bit by bit, never filling the blender too high. Make sure the benders lid is on, and lean on the top when you turn on. If not the burn you will get is awful, and a most frequent accident in even professional kitchens.

OK, it's not Tolstoy, but it is more than just a list of generic steps, which is what you find in most Cooks Illustrated recipes.

3. Most food bloggers indicate the source of a recipe, even if they have made some changes to the recipe. It's not entirely necessary, but it's a courtesy.

4. Even though a publishing company would not have a leg to stand on in court, most food bloggers don't have the resources for a legal fight. Which is probably what the folks from Cooks Illustrated are banking on -- that a snippy sounding woman who waved the "copyright" word around would cause bloggers to back down in fear.

I always liked Cooks Illustrated and wrote about them in a positive light. Now my view of them is less rosy. I respect their need to run a profitable business, but going around and berating food bloggers is a foolish practice because they come across like bullies. I'm not sure I have the cojones to take on a company like that, and that's why I give the Melissa (the blogger) a lot of credit for her post (although I don't think it was necessary for commenters to call the snippy PR person nasty names). So I'm going to spend a few days taking a hard look at any recipes of theirs I've posted and decide what to do about them. I'll also think twice about purchasing from them.
Posted by Tracy at August 09, 2008 6 comments

Email ThisBlogThis!Share to TwitterShare to FacebookShare to Pinterest
Labels: Life in general 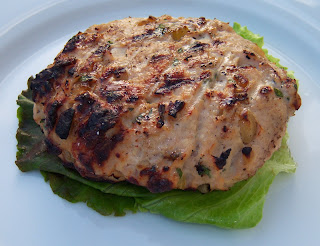 Before I talk about this recipe, let me make one thing clear. Although my primary role is an at-home mom, I do not sit at home and eat bon-bons and watch daytime TV all day long. In fact, my TV is rarely on during the day, because I've got lots to get done and I don't need the distraction. I think Oprah is a wonderful person, but I almost never watch her show.

A friend mentioned that Oprah had raved about a turkey burger on her show, saying the turkey burger at Donald Trump's Mar-a-Lago resort was the best she had tasted. So when my husband had a hankering for burgers, I hunted for the recipe, and found it here. 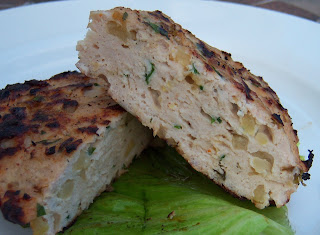 In the end, the patty was, in fact, one of the best ground turkey patties I've tasted. It was moister and more flavorful than other turkey burgers, and not in the weird way I had expected from the apples. I had one for dinner, and the other two are in the freezer for another meal. I didn't read to the end of the recipe, so I didn't see that the burger should be served with Mar-A-Lago pear chutney until after I had gone grocery shopping. I'll have to try it with the burgers next time.


Sauté the scallions, celery and apples in the canola oil until tender. Let cool.

Place the ground turkey in a large mixing bowl. Add sautéed items and the remaining ingredients. Shape into three burgers. (Refrigerate for 2 hours, if you have time.)

Season the turkey burgers with salt and pepper. Place on a preheated, lightly oiled grill. Grill each side for 5-7 minutes until meat is thoroughly cooked. Let sit for 5 minutes.

(The original recipe says to serve it with a side of Mar-a-Lago Pear Chutney and your favorite toasted bread, pita or hamburger roll.)
Posted by Tracy at August 07, 2008 6 comments 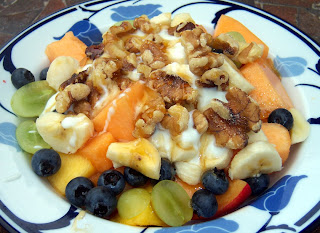 I love all of the gorgeous fruits that are in season, and I prefer to eat them fresh.

I first had this dish at a local restaurant called Aladdin's Natural Eatery, and I've made it at home many times. Yogurt, honey, and walnuts complement the fruit.

The recipe: fill a bowl with seasonal fruit (in this case I used peaches, melon, grapes, blueberries, plums and bananas). Top it with a dollop of yogurt (I like vanilla), a drizzle of honey, and a handful of walnuts. 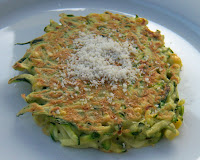 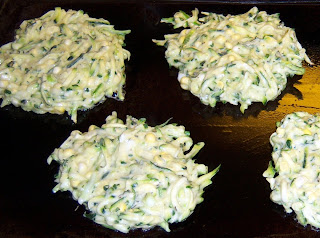