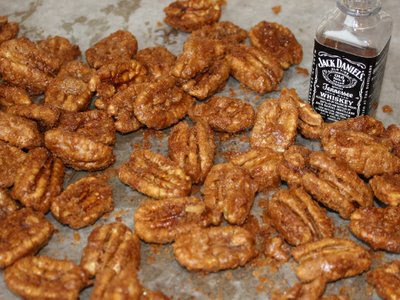 I've had this recipe in my files for ages, but haven't made it. This year, I thought I'd make it to send to my stepfather, who loves Jack Daniels. I had to tinker with the recipe to make it work, and I still don't think it's just right. Most glazed nuts recipes call for boiling the coating mixture before stirring in the nuts, and that might work better with this recipe.

I can't say I loved them, but then again, I'm not a big drinker of Jack Daniels (which is why I used the teeny tiny bottle). I post the recipe here in case you enjoy Jack Daniels, or want a quick goodie for someone who does. If you make them, please let me know what you think.

(Later, a review from my Mom: "I don't know that they taste much like Jack Daniels, but they are very flavorful.") 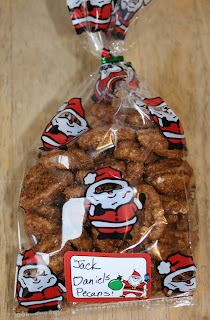 In a large skillet, combine sugar, Jack Daniels, instant coffee and cinnamon. Mix until well combined. Stir in pecans. Bring to a boil over medium heat, stirring constantly until pecans are well coated.

Put in oven and bake about 10 minutes, until the coating is dry. Cool.
Posted by Tracy at December 22, 2008

Email ThisBlogThis!Share to TwitterShare to FacebookShare to Pinterest
Labels: Appetizer recipes, Christmas Cookies and Treats, Gifts from my Kitchen

This is a great idea for a present - wish I'd seen it earlier. Must remember for next year!

I'll let you know how they turn out, my husband and father in law are huge Jack Daniels fans, I think we keep them in business!

Wowzer - these look really good! Too late for this year but bookmarked for next.

This is a great idea. I wouldnt have thought of that.

I made them, woohoo! I think they turned out good, but needed a little more Jack flavor. It tasted really good, but I think baking them took some of the Jack away. I did a post today on them. Thanks for sharing!!

Yum. I'd be all over these.