My secret source of baking supplies 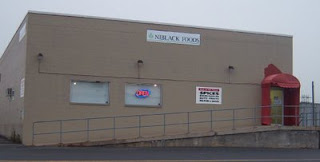 One of my favorite sources of baking supplies has been around for decades (its label reads "since 1932"), but not many people seem to know about it, so I'm going to fill you in on my secret.

The place is called Tadco ... although it is changing its name to Niblack Foods. It is located in the Genesee Valley Regional Market on Jefferson Road in Henrietta.

Inside the warehouse-type building is a tiny store that carries a huge selection of cooking and baking items at very reasonable prices. It carries things that are hard to find in grocery stores -- stuff you see in cooking magazines and on Iron Chef America. As example, I saw gelatin sheets there yesterday -- I know I've seen those used on Iron Chef America, but have no idea what they are used for. 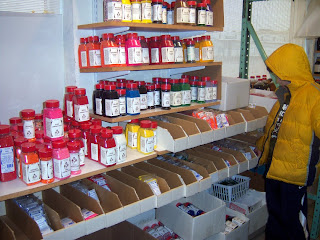 My son and I went shopping for our holiday baking supplies yesterday. As you can see by their display of decorative sugars and jimmies, the storefront and packaging are no-frills. Here are some of the cookie decorating goodies we picked out:
- 14 oz of rainbow nonpareils for $5
- 6 oz of rainbow sanding sugar for $2.75
- 6 oz of gold sanding sugar for $2.75
- 5 oz of green jimmies for $2.75. That's not much more than the itty bitty containers at the grocery store!

Other fun stuff I purchased yesterday:
- whole wheat pastry flour (2 pounds for $2)
- SAF-instant yeast ($4.75 for one pound). The last time I bought SAF-instant yeast was at Williams Sonoma and I paid $7 for just over 4 ounces -- and I considered that a terrific deal over the packets you find at the grocery store. (Yeast, by the way, can be frozen.)
- I'm not going to go on ... my husband reads this blog and I don't want to add up the total!

If you're not a Rochesterian, they have a Web site. It's as no-frills as its storefront, but if you're interested, a link is here. I have never ordered from the Web site, so I can't vouch for its service.

If you are a Rochesterian and go there, keep your eyes peeled, because the market sign has been taken down and a big new building is going up near the road. If you enter the market from Jefferson Road, Niblack Foods is near the back of the market.

(For full disclosure, I am not affiliated with Niblack Foods and I don't know anyone who is.)
Posted by Tracy at December 07, 2008

We love Tadco! And you're right - it's one of Rochester's best-kept secrets (along with Palmer Foods, just across the lot from Tadco). I get semolina at Tadco for bread, as well as 12-grain hot cereal and I even picked up pumpernickel flour there once. I'd never even seen pumpernickel flour before!

It's also a great place to find hard-to-find and/or expensive spices. And I love that pretty much everything comes in multiple sizes - a wee little zip-top baggie and up.

They also have a small stall at the Public Market, which is convenient, too. Convenient if you're going to the market, that is. Otherwise, maybe not so much.

ToyLady, thanks for the comment! I agree that it's nice that Palmers doesn't make you purchase a huge container like at a warehouse club. I saw Palmer's across from them and thought I needed to try there someday.

I was quite jealous until I saw the link you provided. We folk living in smaller communities depend on mail order for a lot of our ingredients. Thanks for sharing.