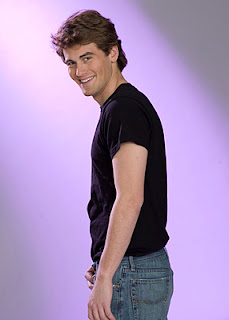 One of my guilty pleasures is competitive reality TV – I regularly watch such shows as Top Chef, American Idol, The Next TV Food Network Star, The Biggest Loser and Dancing with the Stars. Last year, I got sucked into Project Runway, and I have absolutely no interest in fashion. I watched Survivor during the year it took place in Australia, but after watching people starve, I decided I didn’t feel right being party to that show.

Because I try to put a lid on the amount of TV I watch, I hadn’t intended on watching Grease: You’re the One that I Want. The idea of the show is that they are casting a revival of Grease on Broadway, and the public will pick the leads (“Danny” and “Sandy”) in a competition that resembles American Idol. But I decided to check it out when I read that there’s a local guy in the show. Kevin Greene, also called “Bellhop Danny” on the show, is from the local town of – what else – Greece. (They give each competitor a Danny-related nickname – is it fair that our guy is “Bellhop Danny” when another guy gets the nickname “Hot Danny?”)

What does this have to do with food? Bear with me, I’m getting there. 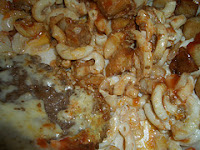 On one of the episodes of the show, they follow the contestants to their home towns. They show Kevin in front of the “Welcome to Greece” sign. And then they show that Kevin likes to eat ... the Garbage Plate! (I describe it in this post.) The Garbage Plate again???!!! Isn’t there anything else we can show as being unique to our area? Isn’t there something ... anything ... we can use to replace the Garbage Plate as the gastronomic symbol of the Rochester area? I swear, if I were to stage my own cooking competition, it would be to find a replacement for Rochester's culinary mascot.

But I’ve decided to forgive Kevin this one. Even if he has lousy taste in food, he has a really good singing voice. And he’s way hotter than “hot Danny.” So, if you’re watching the show, vote for Rochester’s guy!

Garbage Plate photo taken by mookiy on Flickr
Posted by Tracy at February 14, 2007

I'm guilty of watching reality TV too -- and we get American Idol in India! If I were home, I would TOTALLY be watching "You're The One That I Want."

Wow, I can't believe they get Idol in India! My AI favorite thus far is the funny guy with the curly hair and the glasses. The beat boxer dude is also pretty cool -- I hope he works that into some of his songs.

I liked Taylor Hicks right off the bat last year so let's see how I do this year. Of last year's women, my early favorites were Mandisa and Nadia Turner, so my record is far from perfect...

Eeeewwwww...I have to say that the photo of the garbage plate is the yuckiest thing ever to grace this fantastic website! The waffle picture was much nicer!!!