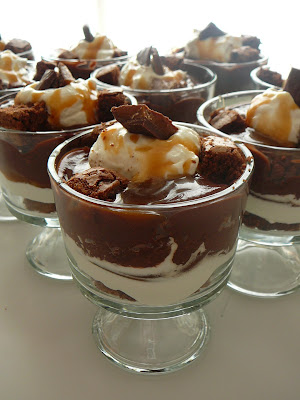 I'm going to fill you in on one of my dirty little secrets. If you're ever at my house and I serve you a trifle, it's because a baking project has gone wrong. In this case, it was brownies that had a case of the blahs. 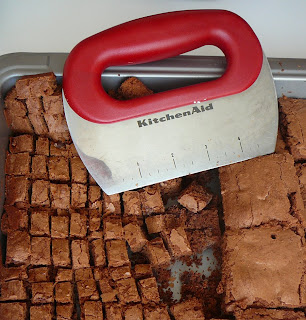 The brownies were yet another example of my not using my judgment in the kitchen. The recipe came from a Southern Living cookbook called Our Readers Top-Rated Recipes. I chose a recipe called Basic Brownies from it, even though my favorite brownie recipes have both cocoa powder and melted unsweetened chocolate in them, and this one had only melted unsweetened chocolate. I thought surely if those vaunted Southern cooks had rated them highly, they'd be good. They weren't, at least to my taste. These had a muted chocolate flavor, even with the addition to a cup of semisweet chocolate chips stirred into the batter. I suppose if you didn't like a strong chocolate flavor (which I can't even imagine), these might be considered good, because the texture was reasonably chewy. I decided to use my cute mini trifle dishes to perk them up. 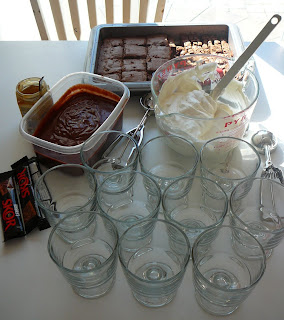 Many trifles call for you to crumble the cake layer, but I wanted chunks of chewy brownies, so I cubed them. For the rest of the layers, I used up odds and ends in the cupboard and freezer, including a box of chocolate pudding mix, a jar of marshmallow creme and a tub of Cool Whip. I know there are foodies who detest Cool Whip and all that other stuff. So sue me. Even Barbra Streisand (one of my idols) loves Cool Whip. And seriously, are you really going to whip heavy cream to add to pudding mix and marshmallow creme? I think not. Hookayyy ... I think I'm getting a little too defensive here.

My guests devoured the trifles and one male guest said I should sell them to restaurants. Heh heh heh. Come on admit it, even though you know what's in them, you'd like them too.

(Psst ... these are on Tastespotting! I have no idea how they pick what to run, but the site is very popular. It's a great spot to drool over.)

Odds, Ends and Blah Brownie Trifles (that taste great!)
Makes 10 individual trifles
The ingredient list reflects what I had on hand. Use your imagination and inventory as your guide to change sauces, pudding flavors and so on.

Beat cream cheese at medium speed with an electric mixer until creamy; beat in marshmallow cream. Stir in 1 container of whipped topping; set mixture aside.

Divide one-third of the brownie pieces in an even layer in the bottom of 10 individual trifle dishes. Spread most of the cream cheese mixture evenly over brownies, reserving about 1/4 of it for garnish. Spread half of the pudding over that. Top with brownie pieces, reserving 33 pieces for a garnish. Finely chop two Skor toffee bars and divide between the dishes. Drizzle with half of the caramel topping. Top with the remaining pudding. Top each trifle with a dollop of the marshmallow mixture. Arrange three brownie pieces on top of each trifle. Drizzle the remaining caramel topping on top. Cut up the remaining toffee bar into 10 pieces and top each trifle with a piece. Cover and chill until serving.
at March 04, 2008
Newer Post Older Post Home