Remember our nice normal gingerbread house from this year? Well, the family with whom we share a day of gingerbread decorating did not take the normal route at all. They were creative and ambitious -- almost nuts, I'd say -- with a gingerbread ZOO! 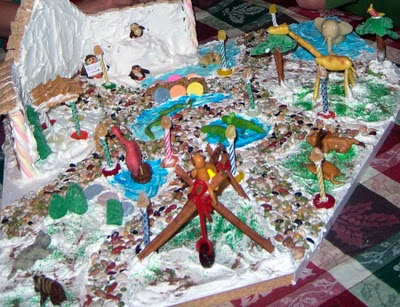 Their family convened a family meeting and, after kicking around some ideas, decided on a zoo. They figured it would take advantage of the parents' and daughter's talent for designing critters out of various candies. (If you want to see some examples of that talent, check out their Shrek and Dr. Seuss characters from last year and Spongebob characters from before that ... you may have to scroll down those posts.)

One daughter, who truly dislikes sweets (something hard for me to fathom), used a mixture of various beans to create the path that wound through the zoo. The son was gone at a birthday party for most of the process, but helped out here and there. The parents and other daughter worked on the critters ... which you have to see close up to appreciate ... 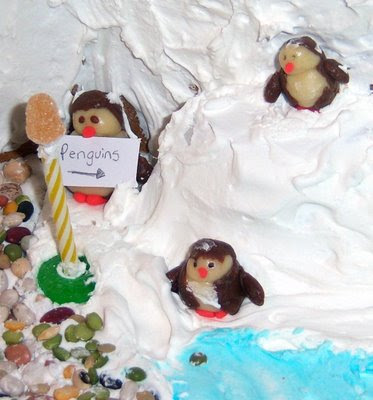 The younger daughter -- 11 years old -- made these cute penguins. I think her molding style has a "cartoon" feel.

Her molding materials were vanilla and chocolate Tootsie Rolls.

Her class did a gingerbread project this week, so she made a bunch of these penguins at home and brought them into school. Her classmates wouldn't believe she had made them. An 11-year-old did -- really! 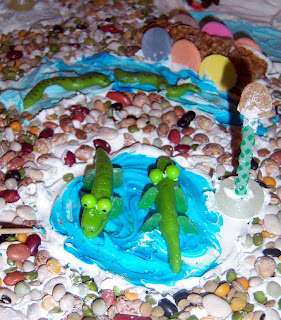 Dad made a pair of alligators with lime Tootsie Rolls for their bodies, green gumdrops for legs, and round ball candies for eyes.

Behind the gators are more of the daughter's creations -- snakes, also made with lime green Tootsie Rolls.

And how about the cute light posts? Those are birthday candles with little gumdrops on top, with Life Savers as their base. (OK, I have to admit ... the Life Savers were my suggestion.) 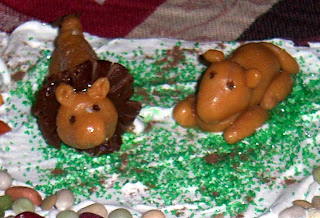 Mom made some contributions as well. She made a pair of cute lions out of caramels. I really like the mane on the female!

She went to art school, but she surprisingly didn't take a class in candy sculpting.

She also made a striped hyena (that was originally a zebra) that I didn't get a good photo of.

The ground of the whole creation was royal icing sprinkled with green sugar and allspice for a realistic effect. 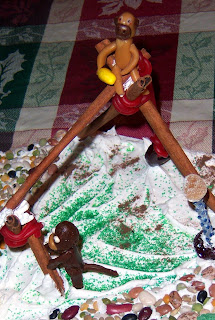 Dad made monkeys out of caramels (although I think their faces look kind of like Homer Simpson). The monkeys' play apparatus was made out of cinnamon sticks and Twizzlers Pull Apart licorice. There's even a tire swing for the monkeys to play on. The monkey on top is holding a candy banana.

Did I mention that this guy is a financial planner? He's got an incredible amount of artistic talent, but works with unusual media. His other specialty is pumpkins. Each Halloween, he does inventive carvings -- this year he tackled Wall-E. I've never seen him work from any kind of sketch or picture -- it's all out of his head. 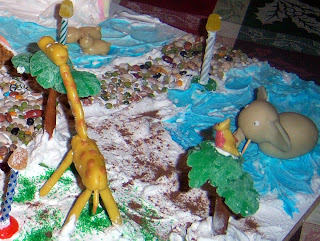 In the back of this picture are a pair of polar bears, made by the daughter out of vanilla Tootsie Rolls.

At right is an elephant who I think looks like "Horton Hears a Who." To the left is a giraffe eating the leaf of a tree. That one took a lot of engineering. I'm pretty sure the legs and neck have toothpicks inside for support. The palm trees -- with cinnamon stick trunks and spearmint leave tops -- were Mom's idea.

At about this time, this family had been working on the project for a few hours, and the talented younger daughter went to a friend's house to play. The other daughter had completed her path and walls, and had no interest in sculpting with candy. And the son was playing with my sons. 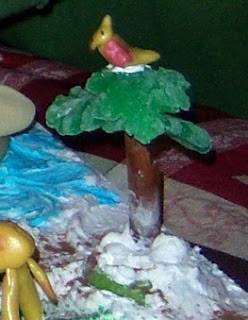 Then the Buffalo Bills game started, and both the Dad and my husband turned their attention to the game. At this point, the Mom's attitude was, "let's just fill these bare spaces with ANYTHING and get this done." That's when I jumped in ... I made a flamingo out of pink Tootsie Rolls, with toothpick legs, which kept falling over. I made a snow leopard that I didn't get a good shot of. Finally, I made a palm tree, with a little parrot on top (right). I actually kind of liked the parrot.

What's funny is that once we wiped our brow from getting both creations done, our two families started talking about what we'd do next year. My husband:

"Next year, let's do an amusement park. With roller coasters."

Oh yeah, that will be EASY. Come back next year and see if we're crazy enough to attempt it!

P.S. If you're thinking of making a gingerbread creation before Christmas, I just came across a nice series of tutorials on a blog called At Home With the Farmer's Wife. Since I also want to have the links on hand for next year, I thought I'd share the links:
Step One: Get a Pattern
Step Two: Make Gingerbread Plywood
Step Three: Cut Out and Bake
Step Four: Make Royal Icing ... although I prefer Martha's Eggless Icing
Step Five: Glue Together

This is a "wow" project. Some really clever ideas here.

Wow - that is one of most creative ideas I've seen in a long time. My kids at school would have loved to do this...thanks for the idea, I might use it next year!

It looks so fantastic! Ya'll are so creative.