Gingerbread 2008: At last, a normal house

All Moms have their Mom-isms.

"Life is not fair," is one my friend, Melissa, says to her kids on a regular basis.

"A moment on the lips, forever on the hips," was one of my own Mom's. I probably should have paid a little more attention to that one.

"The first time it's funny. After that, it's just annoying."

OK, so it's not as ubiquitous as the first two, but I find myself saying it all the time.

"The first time it's funny. After that, it's just annoying," I said, and removed it. See?

This time, I vetoed any scatological humor. My concession was Calvin & Hobbes having a snowball fight in front of the house. 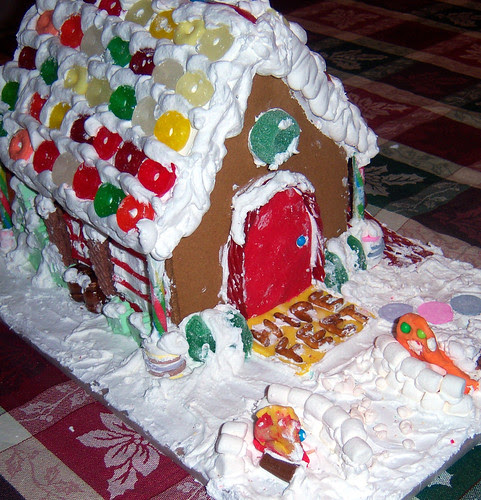 Can you tell that those creatures in front of the house are Calvin & Hobbes? Well, those were created by my older son. I think his use of little candies for eyes gave them a scary effect but he was happy with them. Let's just say he's more of a musician than an artist -- one of his many musical ventures is playing bass in this band.

My younger son, thankfully, wanted to make a normal house. He made the roof of Life Saver candies above (I embellished it with the snowdrifts of royal icing. He also came up with the idea of using alphabet pretzels. I used them in the "wipe feet" doormat above -- something I'd imagine Calvin's mom doing. My son also used the pretzel letters on the back of the house (or is it the front?) below. 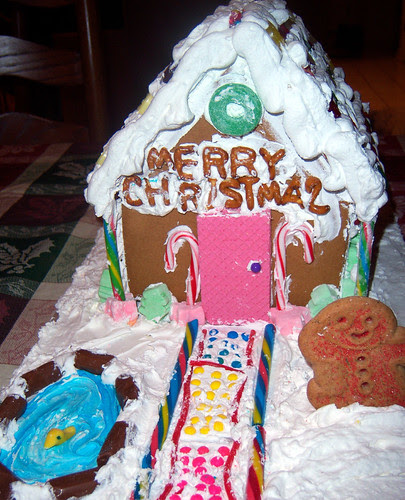 My younger son also made the path (of candy dots -- the kind that come on paper -- and Twizzler Pull apart licorice). He also added the friendly gingerbread man in front.

Although come to think of it, I haven't seen that gingerbread man for several days! Uh oh, I'm suspecting the work of FD. Who is FD? Well, you'd have to read this post to understand.

As for our friends' house ... well, it wasn't a house at all. It was an act of sheer lunacy. Shall post it soon...

This was featured on a site that's new to me -- but has lots of fun tips and ideas!
Posted by Tracy at December 17, 2008

Love it! I remember last year's creative gingerbread houses, and it made me giggle again this year!

Seems like it's the best creative outlet out there for all the holiday stress, however good or bad that is! Last year's post had me laughing. At least you don't have friends like mine who plan on taking the houses and adding fireworks to them on new years!

Tell your boys I recognized Calvin and Hobbes right away. I love your gingerbread house, but I'm even happier that you all had such a good time putting it together.

Patsy & HoneyB, very glad I made you chuckle.

Mary, after reading your comment I reread my post and decided it came across a bit negative and needed some editing. Thanks.

Love the houses! Your kids did a great job.

You have much more patience than I ever had with my own three doing a Gingerbread House. Of course, I'm not the decorator. Hubby always has and always will do that job. I'm just a baker.
It looks like your whole family is very creative!

Emily and Barb, thanks!

Barb, I laughed at your comment about "your three." I had a coworker tell me that there's a huge difference between 2 kids and 3 kids. He said with 2 kids, there was one kid for each arm (if alone) or one kid for each parent (if together). When you get to 3 kids, you're outnumbered!

Poor Charlie! He just wanted to be part of the fun! And for the record, he's not just a FD, he's a F-CUTE-D!

Merry Christmas to you and yours, girl! :-)