The recipe that made me love leeks 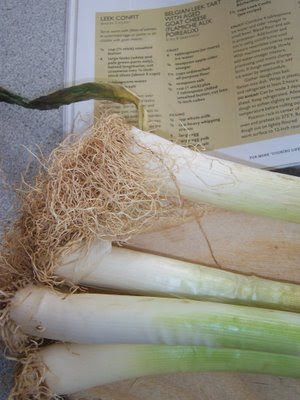 I started sharing a Porter Farms CSA membership for a lot of reasons, among them to make me enthusiastic about a wider variety of veggies. After three years, I had just one new veggie to love: beets. But after this recipe, I am happy to report I now have two: beets and leeks.

It's not that I didn't like leeks. They just struck me as a giant and rather lackluster cousin to the scallion. I had never looked at one and said, "yum."

The recipe that changed my mind was in the October 2008 issue of Bon Appetit, in the column written by Molly Wizenberg (of Orangette).

She rhapsodized about leeks and this stuff she called leek confit. As far as I could tell, leek confit was just a fancy name for leeks sauteed in butter with a little salt. How good could that be?

But I happened to have all the ingredients in the fridge, although the leeks from the final weeks of my CSA delivery had seen better days, so I decided to try it. There wasn't much to it -- wash some leeks well, cut up, and slowly saute in butter. When they were done, they didn't look all that impressive -- just some sauteed leeks.

In the magazine, Molly went on to include the leek confit in a tart but I didn't feel like dealing with the whole tart business. Instead, I did one of the alternatives she suggested -- cut up a baguette, spread it with a spreadable goat cheese (and not a very good one), and slather it with those leeks. 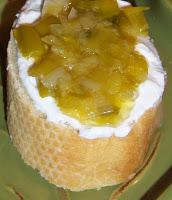 Oh yum. Double yum. OMG yum. The leeks were buttery with a oniony, faintly herbal flavor and a good contrast to the tangy goat cheese. I ended up eating it for dinner (BTW, don't do that -- it's a little too rich for dinner). My 13-year-old son tried some and said, "this might be my new favorite food," and then devoured the rest of the batch.

I am dying to take this to an upcoming holiday party, but I'm pondering the logistics of serving it. The confit (and yes, I think it's good enough to bear the fancy name) is best served warm, but if I make the crostini and put them out, the leeks will cool off pretty quickly. I guess I could take the bread, the goat cheese, and the confit in something that would keep it warm, and let the guests make up their own crostini. Or maybe I should move on to make Molly's tart. We'll see. In any case, I'm happy that next year, when I open up a bag and see leeks, I'll say, "yippee -- leek confit!"

I'm sending this to Thursday Night Smackdown for her first Thursdays blogging event. On the first Thursday of the month, bloggers make recipes from their collections of cookbooks and magazines. This month's theme is hors d’oeuvres. I can't wait to check the blog on Monday (December 10) for some more appetizer ideas for upcoming holiday parties! 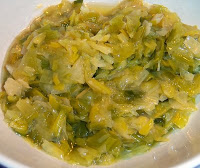 Leek Confit
from Bon Appétit,October 2008
Recipe by Molly Wizenberg
I served it warm on slices of baguette spread with goat cheese. Molly said to serve it warm with fillets of salmon, in scrambled eggs or pasta, or on crostini with goat cheese.

Melt butter in large pot over medium-low heat. Add leeks; stir to coat. Stir in water and salt. Cover pot; reduce heat to low. Cook until leeks are tender, stirring often, about 25 minutes. Uncover and cook to evaporate excess water, 2 to 3 minutes. Serve warm. DO AHEAD: Can be made 1 week ahead. Keep chilled. Rewarm before using.
Posted by Tracy at December 05, 2008

i am SO making this. i usually read bon appetit, i don't know how i missed this one! looks great.

I will have to try this. I don't cook with leeks a lot either.

I'm really intrigued. I'll have to try this. I'm a leek lover.

I just started using leeks this past year and I really like them. I will have to try your recipe.

I used the same recipe to get rid of some (slightly old) leeks from my CSA box! I didn't bother making a tart, either; I added them to some scrambled eggs with salmon.