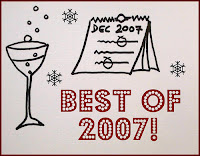 One Hot Stove is hosting a blog event that highlights the best that food blogs had to offer this year. Well, a fair amount of this year's blog was spent apologizing for not blogging! So I'm pointing you to just a few tasty tidbits from this year. Then, over the next few days, I'll catch up the best stuff that I didn't have a chance to write about in 2007. 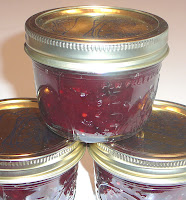 1. Favorite new recipes of the year

My two favorite new recipes (that I wrote about) were Spiced Pumpkin Bread and Cranberry Chutney.

My favorite food TV programs haven't changed from a year ago. Top Chef is still my favorite Food TV program by a mile. Recently, I've found myself strangely drawn to some of Gordon Ramsay's shows, particularly Ramsay's Kitchen Nightmares on BBC America (I hate Fox's adaptation of the show). It would be a stretch to say I like them, though.

Hooray for King Arthur White Whole Wheat flour! According to the King Arthur Web site, it has all the fiber and nutritional value of whole wheat flour. I have used it in place of all-purpose flour in quite a few recipes, and my persnickety family has never noticed a difference in flavor or texture. (To be on the safe side, I usually only replace half of the all-purpose flour with the white whole wheat flour.) What a great way to sneak in some whole grains!

In second place would be Kraft caramel bits -- bits of caramel that don't need to be unwrapped -- but I can't find them. I grabbed some at Wegmans at Halloween time, and I haven't seen them since. Boo-hoo! If anyone spots them in the Rochester area, would you mind letting me know so that I can grab some more?

Even though I went to a pricey fall salads class at the New York Wine & Culinary Center, my favorite cooking class was a free demo by Ming Tsai at the Pittsford Wegmans. I liked the way he showed his recipe for shrimp mousse, and then demonstrated three different ways to use it. The samples that were handed out were delicious. Plus, he had a fun, engaging personality. I bought one of his cookbooks but haven't cooked a single recipe from it yet. I'll put that on my to-do list for 2008.

At the time of the demo, I was also contributing to a blog called Edible TV, so my post about the demo is here. (Contributing to a group blog in addition to my own proved to be more than I wanted to handle.) 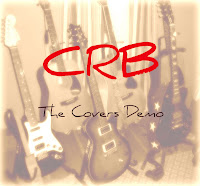 My favorite newly discovered Website is Picnik, a photo editing Web site. I have Adobe Photoshop, but I feel like I need to take a class to be able to use all of its features. Picnik is so much easier. It took me less than an hour to create the title banner that's above (it's a work in progress but much better than the plain title I had before). I've also been playing around with combining Picnik and Photoshop to create CD covers for CRB's demo (my work in progress is shown to the right). 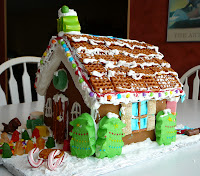 My favorite post was about this year's gingerbread house. It pretty much captures the spirit of our family.

They aren't food related, but I love the ones of my dog, Charlie, with a frog that kept visiting our pool cover last summer.

These are the same almost every year, but they are:
1. To get better at planning meals so I don't go to Wegmans every day.
2. To cook healthier on a regular basis.

- I will tinker some more with that title banner.
- I do plan to blog more regularly, although I don't think I'll ever be someone who posts daily.
- I will create a better index of the recipes I've posted on this blog.
- Finally, I will chronicle the excitement of the lead-up to the Pillsbury Bake-off, as well as my experience at the competition!
Posted by Tracy at December 26, 2007

Email ThisBlogThis!Share to TwitterShare to FacebookShare to Pinterest
Labels: Life in general, Wegmans

I enjoyed reading your "best of" list.
I'm looking forward to reading many more Rah Cha Chow posts next year, including the road to the bake-off posts.

This is such a fun and engaging post! Like you, I have also loved discovering and using white whole wheat flour this year. And picnik :)
Thank you for this fabulous entry! Thanks for leaving a comment...I never did get your mail, so it must be lost somewhere in cyberspace.
You have a nice blog here!

Thanks, Emiline and Nupur!

Nupur, I look forward to reading all the "Best of" posts!

Thanks for the photo editing tip. I registered and tinkered with a photo of mine. I think I may really find that site useful. So thanks! Happy 2008!